Japanese Siomai is a type of minced pork and sometimes with prawns where it is wrapped in nori sheets instead of the usual dimsum wrapper, giving it a unique seafood taste.

I have been into Japan, Hong Kong and China and probably I had seen one of these types of dimsum wrapped in nori in either of those countries but they are very rare hence I can’t remember where specifically I saw it. This means I am not entirely sure where this food originated but one thing, I am sure, this thing is very popular in the Philippines as a street food. To prove that point search for Japanese siomai on Google and all you will see are pictures or blogs shared by Filipinos in the Phillippe’s.

Filipinos love siomai, regardless of the variety. They are usually eaten as a street food, snack or a viand served with rice. I too grew up with it, I still remember my first job in the university as a university instructor, during lunch times I order this almost every day as my side dish, since one of the cafeterias on that university sell them. During those times it was not as popular, usually you can only grab hold of it in mostly Chinese restaurants and several small shops, but today it’s a different story, there are plenty of options everywhere, from restaurants, small food stalls and even street vendors now offer them. Varieties of this humble dimsum also started to emerge, at first it was just the usual minced pork and prawns but today you have varieties like Shanghai style, Hong Kong Style, Chicken siomai, Beef siomai and our post today the Japanese Siomai.

Although the name might suggest its Japanese, I believe this did not originated from that country, I think they gave it that name because instead of the usual wonton wrappers used to enclose that meat in the middle, nori sheets are used giving it a very unique taste you can’t get with the other varieties. When you eat it, the taste feels familiar, you brain is confused whether you are eating a sushi or a siomai, basically it’s the best of both worlds where you get the seafood taste from the seaweed and the meaty flavour from the minced pork. This too have many varieties but the most common one for the Japanese siomai is the addition of kani in the middle. Have you tried something like this? Have you seen this elsewhere apart from the Philippines? If you know more about the history of this dish let me know as I am in the hunt for its roots.

Japanese Siomai is a type of minced pork and sometimes with prawns where it is wrapped in nori sheets instead of the usual dimsum wrapper, giving it a unique seafood taste. 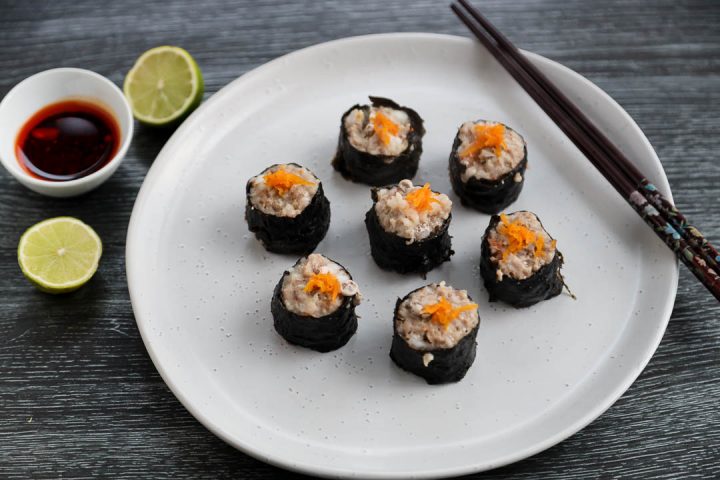