Back in the Philippines dining in at food courts is a regular occurrence not because we like it but it makes a lot of sense when all you do on a weeknight or a weekend is to visit a mall. Mall life in Asian countries is quite a big thing, with the lack of other nice public parks, affordable or free activities and outdoor recreation, mall becomes the first choice of hangouts for everyone. This is why malls in Asian countries tend to be huge and almost everything you can think off is the comfort of one temperature-controlled roof, things like Theme Park, Ice Skating Rinks, Cinema, Concert Hall, Churches and even indoor parks, you name it most of the big malls have it. In New Zealand it is quite different since we have clean beaches everywhere, nice forest walking trails nearby, great park facilities and tons of outdoor activities under a good climate there is no need to visit a mall. We only go to one when we need something but not because we want to hang out, so we rarely visit one.


Now with my disappointment towards the new suburb we live in where our dining options are limited, we have to out something we don’t usually do here in Auckland. We had tried most of the restaurants here in Westgate and in search for something new to try our next best option was the mall. Having said that the food court in Northwest shopping mall is not that bad, in fact it looks nicer than most food courts we saw in Auckland, apart from the food courts of Commercial Bay and Second Floor Sylvia Park. Northwest food court looks quite modern but true to its Westgate location, there are only few options in here too, probably there are around 15 shops to choose from and our restaurant for today, Buns and Rolls is the first ones we tried.

Buns and Rolls is a serves Vietnamese cuisine where you find food items like Pho, Goi Cuon and Banh Mi. They also serve other items like Bao Buns and Fried Chicken but that’s about it. We came here on a lunch time to have some quick bite after we forgot that we did not cook enough rice the dinner prior so that we have something extra for lunch. We tried to order what’s only Vietnamese on their menu so we grabbed one of each, the Pho, Goi Cuon and Banh Mi.

For the Banh Mi and Goi Cuon they have a combo called Bamboo (NZ$17.00) which has both, one Pork Banh Mi and 2 pieces of the Pork and Prawn rolls. Our experience with Banh Mi is quite few, but during our last visit in Commercial Bay we tried one of the best Banh Mi we ever tried in Auckland, so that sets the bar. In comparison to that, the Banh Mi here is quite average probably even below, the baguette was not that crispy, there was not enough meat on it but on the good side the herbs used was fresh, nothing special but it’s not too bad as well.

Pork and Prawn rolls on the other hand has better fillings, filled with a good amount prawns and pork. Prawns are the full-sized ones, unlike with the other shops where they are sliced thinly and make it looks like there are three prawns used but in reality, it was just one. It has a good crunch from the vegetables and herbs inside but it needs that fish sauce on the side to give it that flavour. 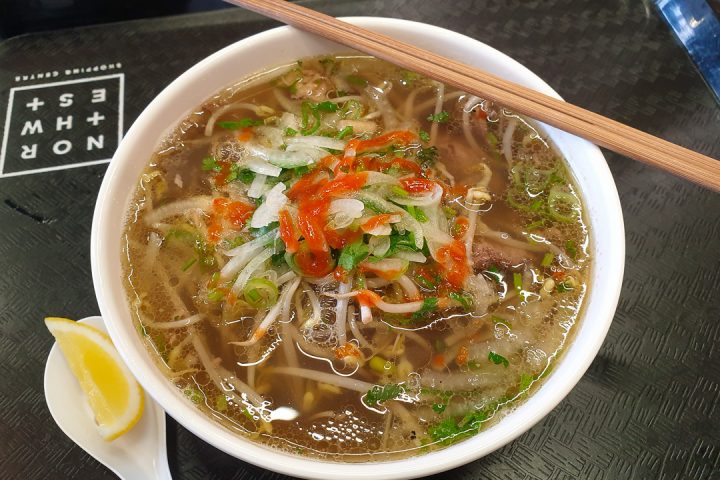 Finally, we had the Beef Pho (NZ$13.50), while it may look appetizing from the photo, that broth was not as strong as I expected specially when comparing them to the many Pho we tried. There was not enough beef on it but there was a good amount of vegetables that came with it, which gave it a good crunch on every bite. I felt it was under seasoned, so I added a lot of Sriracha to give it life.