And you think your usual roast chicken was good, wait till you try this. Copycat Kenny Rogers Kimcheese Roast is a copycat Chicken recipe from Kenny Rogers made with garlic, ginger and gochujang marinated chicken served with rich cheese sauce infused with Kimchi.

I am having this FOMO again after noticing this new offering from Kenny Rogers in the Philippines. I saw this Kimcheese Roast last year on my Instagram feed—– and was wondering what that dish was, the oozing cheese sauce made me want to investigate further as I am planning to cook them at home. Since there are no Kenny Rogers here in New Zealand the next best thing is recreating them and fix that FOMO. Like many Filipino fast-food items, you cannot find its recipe online but that is not stopping me to make my own version based on different descriptions I found on the web. According to Rappler:

The restaurant chain just released the Kimcheese Roast, a Korean-inspired chicken dish—think sweet, spicy, and sour. It’s still the best-tasting roast chicken you love, only infused with Korean flavors for that unique gastronomic experience. The Kimcheese Roast is marinated in gochujang paste (aka that red ingredient used in bibimbap, Korean stews, and tteokbokki), which makes the meat oh-so flavorful. It also comes with Kenny Rogers’ signature Kimcheese sauce (yes, that’s kimchi and cheese combined. Yum!) that gives a tangy and creamy kick.

Kenny Rogers Roasters has taken inspiration from this global phenomenon to give its customers a truly complete Korean flavor experience with the new Kimcheese Roast! It is marinated with Gochujang paste to give a well-balanced sweet, sour and spicy flavor that’s distinctly found in Korean cuisine. Each chicken comes with Kenny Rogers’ signature Kimcheese sauce that gives a spicy sour kick, cutting no corners on its flavors, richness, and creaminess.

That goes the same with Manila Standard. So, it looks like a Press Release to me as they used the same wordings but that already gave me a good clue on how to prepare them, add the usual ingredients that the Korean’s used then I think I can nail this.

According to several sites the keywords are Gochujang marinated. It also mentioned that the chicken was sweet, spicy and sour, the sweetness can come from honey, the sourness can be gathered from lime or lemon and definitely the spiciness should come from gochujang. We will then pair it with some cooking techniques on how Kenny Rogers prepare their original roast chicken which we tried making the recipe before, so it has to be wood fired or imitate a woodfire for that additional smoky flavour. My only issue is the cheese sauce which was not elaborately described so for this one I will just use the usual store-bought Mexican Nacho Cheese Queso which works really well. So just a disclaimer before heading over to the recipe below, I haven’t tried the real dish yet so I am not sure if it tastes exactly the same but I am happy with the results, it was slightly sweet, mildly spicy and with hints of sourness, it was smoky too. The cheese sauce made it even more special as it added more kick to it at the same time added that creamy cheesy layer that makes you want to go back for more. 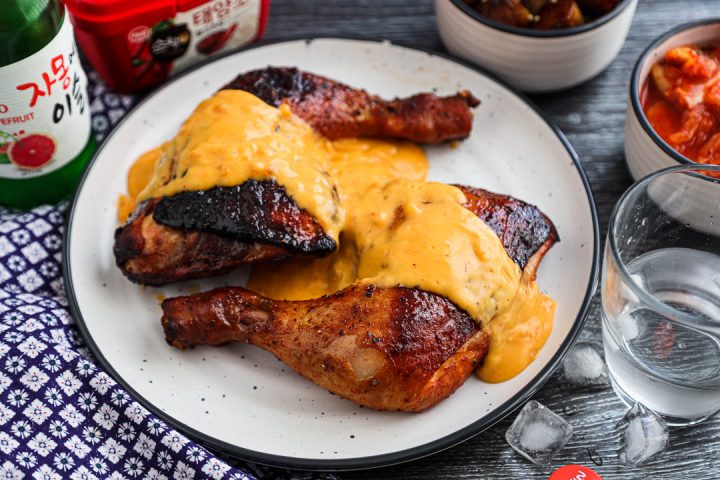