I never knew pantry items, canned goods and long-life processed foods when combined together can make an amazing meal. Budae-jjigae is a type of Korean stew (jjigae) created after the Korean War which used smuggled surplus foods from U.S. military bases combined with Korean pantry staples.

Have you ever thought of combining ham, Vienna Sausage, Spam, baked beans, processed cheese, instant noodles, rice cake and mushrooms cooked as a stew in one dish? Does it sound right or appetising at all? Well for most it won’t but for Koreans and those who already tried this, it is a total eye opener. Budae-jjigae literally means “army base stew” and it is the dish where these pantry items are used and served as a spicy stew. A dish created after the Korean War when the food became scarce in the region which left only few options for the locals to fill their hunger and one of it is by using scrounged and smuggled surplus foods from U.S. military bases in the Uijeongbu, Pyeongtaek, and Munsan areas.

Budae-jjigae during the old days did not look similar to the ones we have now. The original started as a buttery stir-fried dish consisting of canned pineapples, cabbages, onions, American cheese, and mystery meat called piggy porridge (ggulgguri-juk /꿀꿀이죽), then an anchovy stock seasoned with gochujang and kimchi was added which gave birth to the stew that we know today. Budae-jjigae is quite popular in South Korea and the most famous ones are found in Uijeongbu where the dish was initially created, it serves as a hearty stew where diners usually cook in the middle of a dining table with a table top stove but also popular as an anju (accompaniment to alcoholic drinks), where it is enjoyed in a communal manner like the Korean Barbecue restaurants. 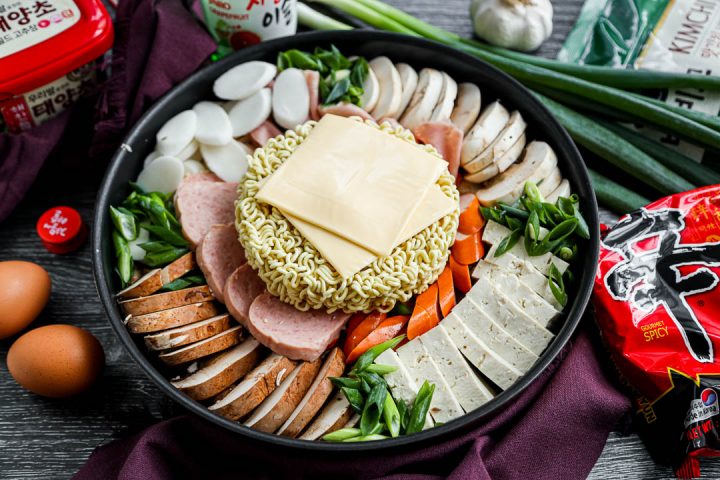 If you are looking for something quick to prepare especially at dinner, no one can beat this, no pre-cooking involved, all you need is to sit at the dining table with the canned goods, a table top stove and family/friends who you will enjoy this with.