Tapa is a Filipino dish made with beef, mutton, venison or horse meat that is cured or dried and cut into small portions or thin slices then pan fried.

What is a Tapa? If you are non-Filipino, the first thing that may come to your mind are those small dishes coming from Spain. No, we are not talking about that, our post today is about that Filipino dish made with beef, mutton, venison or horse meat that is cured or dried and cut into small portions or thin slices then pan fried. Many Filipinos would think that since we have a huge influence from Spain, the word tapa would have originated from them, well not quite, in fact there are many theories where the word came from and none of those were from Spain. Some say that tapa is rooted in the Sanskrit word tapas, which means “heat”, and that was the pre-Hispanic practice of drying meat under sun to preserve them. Some say it was derived from the Proto-Malayo-Polynesian word “tapa”, which in turn is came from Proto-Austronesian word “capa” which means preservation of meat through other means hence we have “tinapa“, that refers usually to the smoked fish. So where did tapa came from? No one knows and since Filipino ancestors preserved meats before by sun drying them most likely it would be earlier than the word itself, probably it was called something else. What we do know is that the modern tapa was partly by the Chinese cuisine but with a twist from the Filipinos, and that is a fact because this dish is usually made by marinating the beef in a mixture that contains soy sauce and vinegar before preserving, sun drying or any method to partly dehydrate them. Soy Sauce is from the Chinese and Filipinos love vinegar. Having said that some tapas don’t use vinegar and gets its salty taste just from salt which also helps to dehydrate the meat and these versions probably is the most accurate recipe used even before the Chinese came.

Regardless of the history, tapa is part of the DNA of Filipino cuisine, widely eaten during breakfast in a dish called tapsilog where it is served together with garlic fried rice, fried eggs and atchara. Nowadays it can be prepared many ways, like most of our dishes and it all varies depending where you are located in that 7100+ islands of the Philippines, it can be thick, thin, crunchy, wet, dried, with soy sauce, without soy sauce, sweet or not, one thing remains, the original ingredient which is vinegar. And that’s what we will be focusing on our recipe today, making it to what I think was the original way our ancestors did it (sans drying process), just with vinegar and tons of garlic. 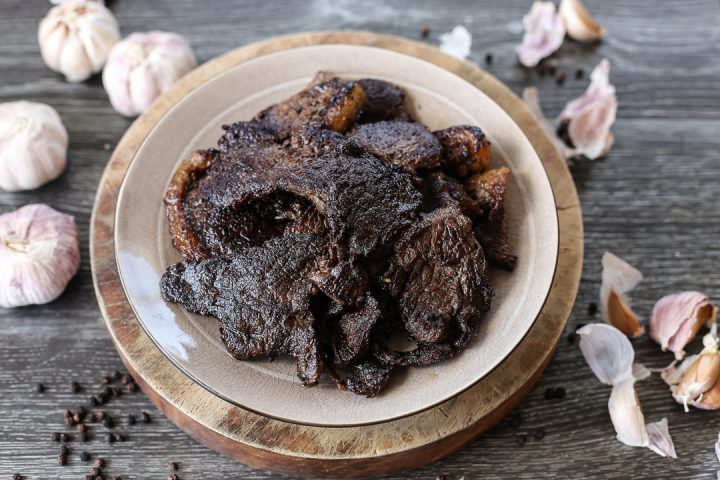 Tapa is a Filipino dish made with beef, mutton, venison or horse meat that is cured or dried and cut into small portions or thin slices then pan fried.