Quite a late post since we were here mid-January after a nice hike and a short dip at Kitekite Falls. It was a good uphill tramp with the falls at the end, perfect thing to do during summer where you dip in its cold fresh water from the falls after a sweaty trail walk. It can get crowded sometimes but there are two dipping areas to choose from, either on the top of the falls or at the bottom of the falls, we tried both and opted at the lower part as the one on top was quite noisy, some people are playing extremely loud music without consideration of others. 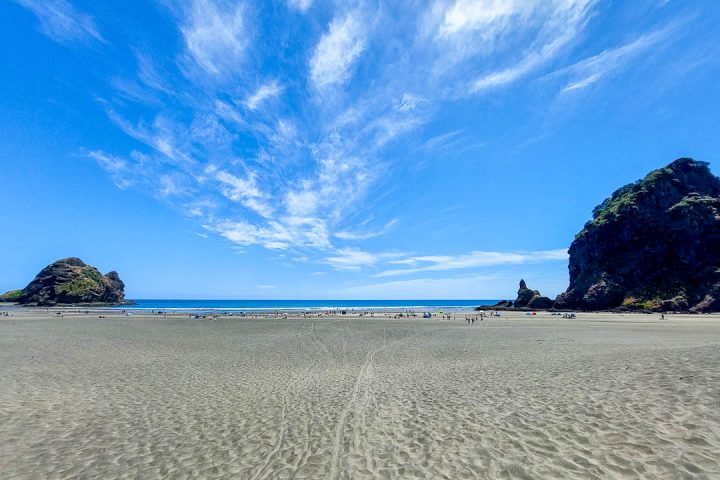 We stayed there for a couple of hours after heading back to Piha town and as we pass by the main intersection, we saw this sign for tacos and fries. We were quite hungry so we did not think twice and followed that sign. It was near the beach area with ample parking, just beside the Phia Surf Life Saving Club was Murray, the shop that sells the said taco and fries. It was quite popular in the area, during our visit there were many diners even it was way past lunch time around 2:45PM.

Menu option looks promising, mostly Tex-Mex cuisine with Kiwi twist to it, they also offer Poutine as well. I was pulled to this place by that taco word from the billboard but after seeing the menu I chose a different one. Instead of just fried we went with the Poutine with Bacon (NZ$12.00), loaded with cheese (not cheese curds) and gravy. While this one was not the Canadian version, it was still good and messy, chips were crispy but you have to be fast otherwise it will turn soggy due to that delicious gravy that it is drenched with, one thing I did not like in this was while the chips was crispy on the edges the bacon on the other hand feels like boiled rather than fried, so it feels like a ham rather than a bacon as it was soft not crispy at all.

We also had some Ceviche (NZ$14.00), a raw fish salad served with slaw and fried tortilla. This tasted really fresh, perfect with the hot humid weather during that time and the serving size was quite larger than most ceviche you will get from other places, it’s more like a mains size rather than an entree. You can feel the quality ingredients on this dish.

Last of the orders was this Soul Bowl with Pulled Pork(NZ$19.00), a bowl of turmeric rice, black beans, chop chop salad, mango slaw and corn chips. While it was the most expensive one and the better looking one, this was our least favourite. It was quite bland, the rice and black beans can be better, I felt just like eating a boiled rice and canned black beans. The pulled pork was not enough as well, this would have redeemed the whole dish as this element has some flavour to it but with a couple of spoon digs, they were all gone. I was expecting a bit of spice from the rice and a bit of tanginess from the salad but that was not there.

For the drink we grabbed some chocolate milk shake and this one was the usual Kiwi style milk shake you get on other restaurants and/or food trucks.

Overall, it was a hit and miss, the Soul Bowl lacked soul, the Ceviche on the other hand was amazing and it was a good value, while the poutine, while the fries was cooked to perfection, the bacon was the opposite, if it was not advertised as bacon but ham, then I would have expected less. Food presentation was 10/10, specially for a food truck, they presented it better than a lot of fancy restaurants out there. Quality of ingredients was spot on. Flavour was OK, definitely not Mexican level, more of a toned-down Kiwi flavour, hopefully they add condiments in the future like salsa verde, pico de galo, or salsa roja so people who likes tasty dishes can adjust accordingly. Price was a bit high, but with an amazing spot and views of Piha, this is totally understandable as views like this are priceless. And for the place, it has that hipster chilled vibes, which we really loved. Will definitely come back here, will skip the soul bowl next time and try other food items on offer like their quesadilla, nachos and tacos.