Carbonara or Pasta alla Carbonara is an Italian pasta dish that consists of eggs, cheese, bacon and black pepper. 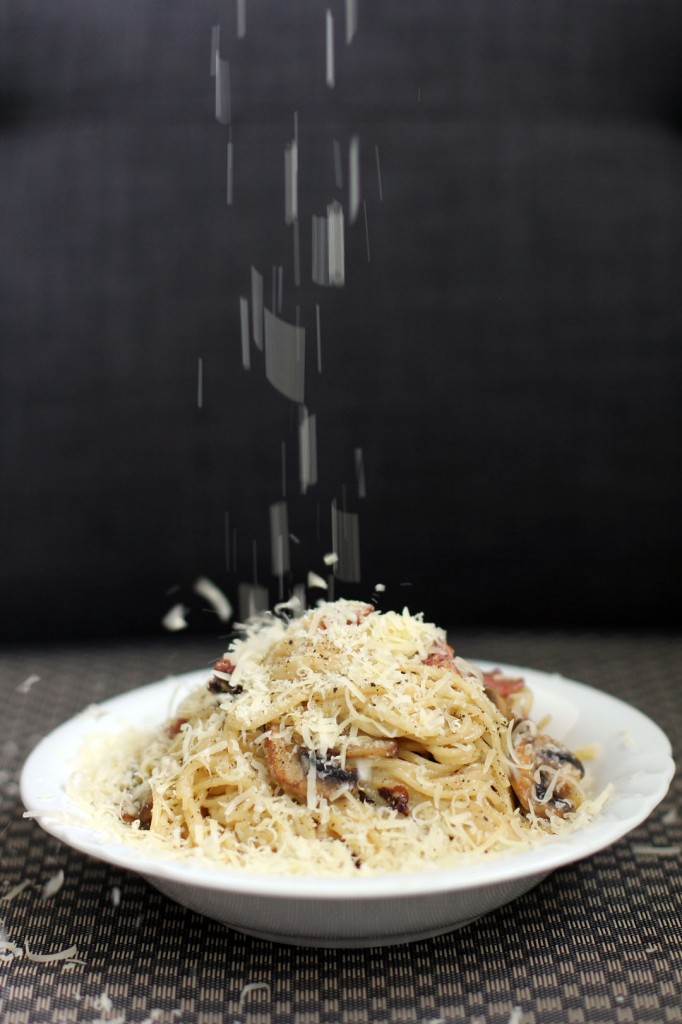 Carbonara or Pasta alla Carbonara is an Italian pasta dish that consists of eggs, cheese, bacon and black pepper. This dish have a lot of historical claims behind it and until now none of them was proven true yet. According to history Carbonara compared to other popular dishes is intended quite recently because there are no cookbooks older than 50 years that give reference to its recipe but like I said earlier there are a lot of claims on how this dish originated.

First claim states that Carbonara is among the recipes of Cucina Teorico-Pratica in Dialetto Napoletano, this said dish is nearly similar to the carbonara dish that we know of but it instead of using dried fatty meats like pancetta or guanciale, lard was used. Eggs was also one of its main ingredients but instead of a runny saucy eggs the recipe calls for an overcooked ones. Having said that this said this is a totally separate one but most likely one of Carbonara’s predecessor.

Another claim states that this was invented by coal miners or what they call “Roman Carbinai”, legend says that they cook this dish by burning wood to produce charcoal or what they call “carbone”. They then named the dish from “carbone” calling it carbonara instead. This is not a very convincing story as these coal miners were seasonal workers who lived far away from civilization, having said that it is given that they have limited access to fresh eggs and other ingredients.

Other claims say that Carbonara is named after the colour of the pepper which traditionally was generously sprinkled over the dish, again this is not possible as Carbonara is known as a poor peasants dish and black pepper during that time was very expensive and only the rich can afford.


Anyways regardless of who wins the claim do we really care? I am just thankful this dish was created and that the important part, I love this dish so much and I guess this is my first choice in pasta, so I can’t imagine if this was never invented. Its invention did sparked a lot of variations but traditionally cooking carbonara does not include cream and its creaminess usually depends on eggs as its base sauce; it is cooked with pasta in really low temperature to maintain its liquid state. In countries outside Italy cream is widely used like in United States, France, Spain and the United Kingdom, other vegetables are added as well and the most common one are mushrooms.

I tried both cream and non-cream versions, I even remembered my mom always make the non-cream version when I was a child. Personally I love the version that uses cream, how about you what version of Carbonara do you like?

Carbonara or Pasta alla Carbonara is an Italian pasta dish that consists of eggs, cheese, bacon and black pepper.