Many years ago I posted an Alfredo recipe which is made with seafood then one person commented on its history and claimed to be a grandchild of the creator of “fettuccine all’Alfredo”, Alfredo Di Lelio. I was quite new in the blogging world during those days and I was stoked to be commented by a descendant of the recipe I was posting before. During those days, most of my recipes are the common dishes found around the world and I do love researching about their history, so getting comments like this was quite exciting for me.

Alfredo e Ines Di lelio was the one who commented, and he said:

With reference of your article we have the pleasure to tell you the history of our grandfather Alfredo Di Lelio, who is the creator of “fettuccine all’Alfredo” in 1908 in restaurant run by his mother Angelina in Rome, Piazza Rosa (Piazza disappeared in 1910 following the construction of the Galleria Colonna / Sordi).
Alfredo di Lelio opened the restaurant “Alfredo” in 1914 in Rome, after leaving the restaurant of his mother Angelina. In this local spread the fame, first to Rome and then in the world, of “fettuccine all’Alfredo”.
In 1943, during the war, Di Lelio sold the restaurant to others outside his family.

In 1950 Alfredo Di Lelio decided to reopen with his son Armando his restaurant in Piazza Augusto Imperatore n.30 “Il Vero Alfredo” (“Alfredo di Roma”), which is now managed by his nephews Alfredo and Ines, with the famous “gold cutlery” (fork and spoon gold) donated in 1927 by two well-known American actors Mary Pickford and Douglas Fairbanks (in gratitude for the hospitality).

We inform that the restaurant “Il Vero Alfredo” is in the registry of “Historic Shops of Excellence” of the City of Rome Capitale.

From the sounds of it, the restaurant “Alfredo alla Scrofa” is not related to the bloodline of the inventor since it has been sold to the family of its restaurant owners where he invented the dish. Alfredo Di Lelio opened another restaurant with his son Armando in Piazza Augusto Imperatore n.30, Il Vero Alfredo (“the true Alfredo”) which is still open today. So in a gist “Alfredo alla Scrofa” is where Fettuccine Alfredo was invented but it you want to taste the real family recipe that was handed over through generations then you have to try it in “Il Vero Alfredo”.

My version below don’t claim it’s an original one but a celebration of this great dish with a vibrant history. The original calls for fresh fettuccine tossed with butter and Parmesan cheese, no cream involved, and the cheese and butter is enough to that fettuccine a nice flavourful coating. Our dish will use the same technique but to make things interesting we added some cream and protein for a more delicious result and making it a complete meal. 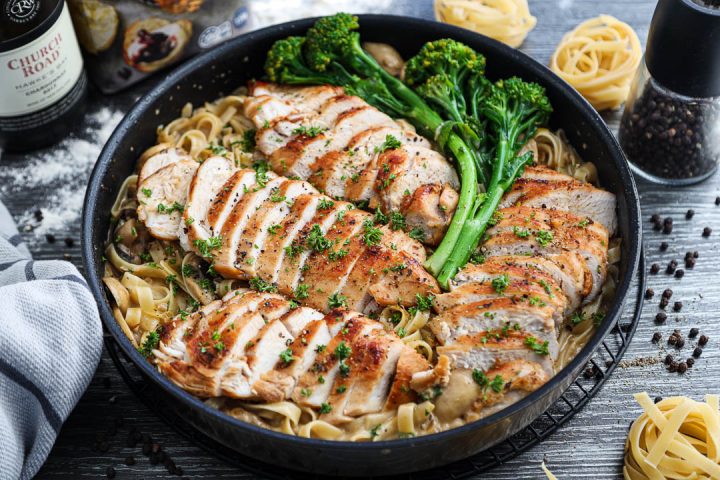