Creamy Seafood Alfredo is a pasta dish made out of mixed seafood like shrimp, squid and fish cooked in cream served with generous amounts of Parmesan cheese. 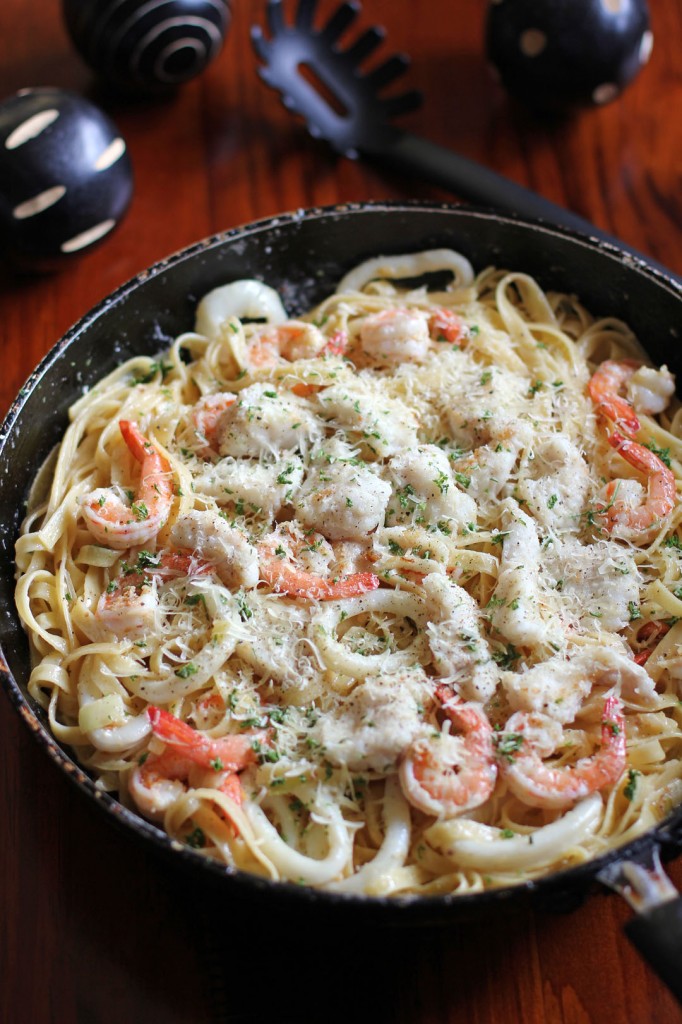 A lot may be confused with Carbonara and Alfredo pasta dishes as they nearly look similar due to the common pasta used which is fettuccine and that rich and creamy white sauce. Having said that are big differences between these two wonderful dishes, Alfredo’s white sauce is usually made out of cheese and butter and sometimes cream while Carbonara is using cream and eggs. Traditionally Alfredo pasta is just tossed in parmesan cheese and hot butter which in turn melts the cheese and coats the pasta but new methods adds cream to the dish.

In 1914 it was invented by Alfredo di Lelio in a restaurant named “Alfredo alla Scrofa” in Rome, it was based on the pasta dish called “Fettuccine al burro” which means Fettuccine with butter but di Lelio did some improvements by doubling the butter amount and it was added before and after fettuccine was placed in a bowl.

It was one of Alfredo alla Scrofa’s specialty, then it became really popular when the famous co-founders of United Artists Mary Pickford and Douglas Fairbanks fell in love with the dish during their honeymoon in 1927. In return they had their photo taken while eating in the restaurant which Alfredo di Lelio proudly displayed in his restaurant, this then started attracting customers. Back in the United States Pickford and Fairbanks started to serve the dish to their friends which eventually lead to its popularity. The rest is history and the restaurant is still in business until this day you can check out their website here.

Though “Fettuccine Alfredo” is a very popular name of a dish, in Italy and most parts of Europe this name is unheard of as this pasta dish retained the original name of “Pasta al burro” in Southern parts of Italy and it uses the name “Pasta in bianco” in Northern parts of Italy. Also in Italy the traditional methods and ingredients were retained which means butter quantity is lesser and cream is rarely used.

A very versatile sauce which can be enjoyed on its own or with ingredients such as vegetables, chicken or seafood that makes it a complete meal. For this recipe I will use my favourite pasta ingredients which are seafood.

Creamy Seafood Alfredo is a pasta dish made out of mixed seafood like shrimp, squid and fish cooked in cream served with generous amounts of Parmesan cheese.