Sushi Bake is a deconstructed sushi roll baked in a casserole made with similar components found in the usual sushi like sushi rice, salmon, crab sticks, tobiko, avocado and/or cream cheese. Usually eaten scooping a slice and placing it on a small nori sheet.

I love the original sushi hence I never wanted to try sushi bakes as it might ruin the experience. I had been trying to shove away the thought of making them at home even though it always shows on my Instagram feed. I started resisting since the early lockdown days of March and try to pre-occupy my mind by baking bread, but I succumbed, after nine months of refusal, here I am making my first Sushi bake.

So what is sushi bake?

Well, like the name suggest, it is sushi that instead of eaten raw, it deconstructed, placed in a casserole and baked. While this thing have been existing for quite some time now, some say it was from Hawaii, some say it’s from Guam and some say it is from the Philippines, we don’t know that for sure since there are no written accounts on when this thing really happened. One thing we have though are clues and legitimate data after my small research on this dish.

So after grabbing some info from Google Trends, it looks like the idea of sushi bake has started as early as September 2005. And if you look closely at the graph, Guam has the bigger concentration of searches, Philippines was only second.

Drilling that data further, it seems like Guam started searching for this term on December 2011

then Philippines started on February 2011, surprise surprise! Even though Guam has more concentration of searches, Philippines was earlier by 10 months, but which country started searching for it on September 2005? Well it’s another surprise, it was Canada, more specifically in Manitoba.

And on that graph, it has a higher concentration of interest, meaning more people knew about it than the graph from Philippines and Guam. Would this be the place where it was invented? Like I said there are no definitive answer to that but this is a big clue which is based on real world date.

What we do know is that this thing went viral because of a celebrity nail artist in the Philippines, her name was Mimi Qui Reyes. During the pandemic lockdown somewhere in April 2020 she started selling this dish to local celebrities and became an instant hit, celebrities would have shared it to their followers and the rest was viral history. On Mimi Qui Reyes post she said:

5yrs ago, I was able to create a treat that I thought would be loved by many due to its fun, and tummy filling nature. A creamy delight that would be perfect for all ages. A dish that could be the centrepiece of any celebration. A dish that spells happiness. A taste like no other. A concept born in California, tweaked and perfected by my palette. Hence, the brand

Which is highly possible since, one of her followers, probably a friend commented

Which translates to “When we were teenagers this is already a big hit (to us)”.

Since then it was one of the Quarantine’s Hottest Food Trend, similar to Dalgona coffee, sourdough bread and pancake cereal but this one is way much better, not in terms of virality but it helped a lot of small entrepreneurs in the Philippines as numerous businesses opened because of this dish, where each businesses offered their own take on it and sold it mostly while dining out was not an option during the lock down.  It a dish that helped a lot of families to earn a decent living even though a lot lost their jobs during this hard times. 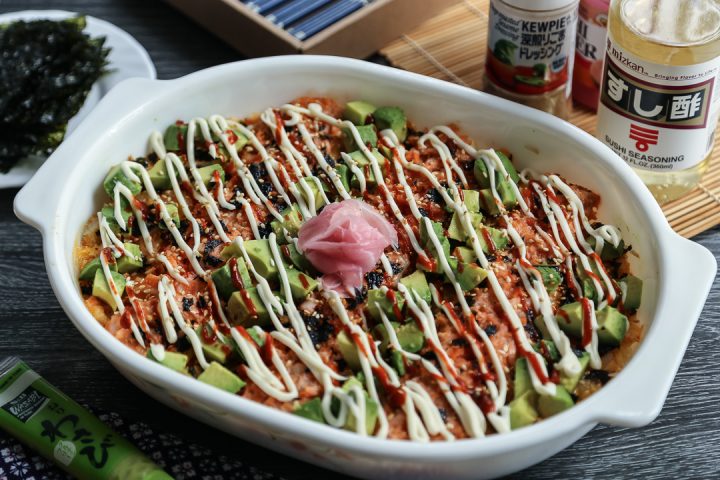 The Sushi bake idea might have been inspired by other dishes, as these looks similar to other food like the poke bowl, pan sushi and sushi casserole. All are made with the same thing but unlike the sushi bake, these three are not baked at all, the closest one would be the latter since the only difference is the bake part, they are layered nearly the same and eaten exactly the same. Just look at this earliest recipe that I discovered, it was from The Tasty Island by Pomai and it dates back to January 14, 2011. To throw another curve ball, this thing was broiled. I will let you decide.

Now back to me. Yes I said before I won’t make it but I just got reminded of my personal ethos that “I should not say no to anything until I tried it (unless its illegal or could hurt someone)” and that what ran into my mind after several months, so I jumped on than bandwagon and gave it a shot and yes it was good! I used two types of toppings and alternated them, first was a spicy salmon and other one is creamy kani. Like sushi, you can basically put whatever toppings you wish, so I will leave it up to your imagination. Now on to my recipe! 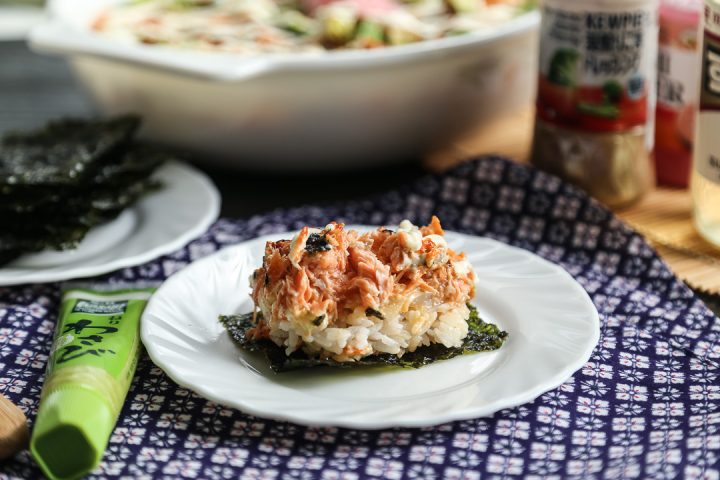 Sushi Bake is a deconstructed sushi roll baked in a casserole made with similar components found in the usual sushi like sushi rice, salmon, crab sticks, tobiko, avocado and/or cream cheese. Usually eaten scooping a slice and placing it on a small nori sheet.

BTW – Merry Christmas to Everyone! Hope you have good one.