Rib Eye Medallion is a simple yet hearty dish of pan seared small sections of rib eye served in copious amount of creamy gravy together with sliced button mushrooms and wilted spinach.

Rib Eye Medallion, I am not sure if there is such a thing but I sort of named this dish like such because this is the part of ribeye that has a small diameter usually found at the end sections of the said beef cut looks like medallions when cut into sections.  Others call it tail, others as chateaubriand but medallions sounded nicer 🙂   When you buy a whole piece of rib eye usually the bigger diameter muscles gain all the attention as you can cut them into generous sized steaks but what happens to the end bits are usually cut up into smaller cubes or even ground up.  For our dish today we will be cooking them steak style but since they are smaller in portion, we will use more of them and drench them in this glorious creamy mushroom sauce which we will also serve with some spinach.

This dish is great for steak lovers as well as those who love enjoying it with tons of gravy. Since this part is usually less fatty, it means they less juicy but nevertheless they are still very tender. To counter that “not juicy” characteristic of the meat is to drench it in a creamy sauce that will give it the moisture it needed.

Rib Eye Medallion is a simple yet hearty dish of pan seared small sections of rib eye served in copious amount of creamy gravy together with sliced button mushrooms and wilted spinach. 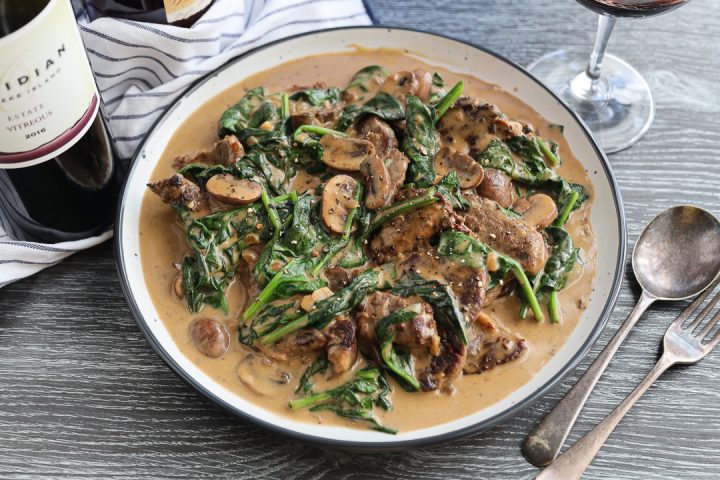