Lanzhou Beef Noodle Soup or Lanzhou Beef Lamian is a type of a very spicy soup of sliced beef, radish, red chili oil and chewy hand-pulled wheat noodles. A dish that originated in Lanzhou, China this where it is known for the springy texture of the noodles used. It was said that during the old days in Gansu province noodles use certain kinds of ash to give that effect on the dough, due to the high alkali content of potassium carbonate present on the ash, it makes the noodles soft inhibiting the development of gluten (similar effect of lye water on rice cakes)

Today there might be a different methods but they still achieve the same results, it is also retained its original characteristics of “1 clear, 2 white, 3 red, 4 green, 5 yellow” (一清、二白、三红、四绿、五黄) which signifies clear soup, white radish, red chili oil, green coriander (though I used green onions on mine) and yellow noodles. This noodle dish was credited to a young Hui man who sold this noodle soup in the streets of Lanzhou during the Qing Dynasty.

Today we will be making a nearly similar soup after I tried it on one of the Chinese restaurants here in Auckland, its flavourful broth infused with spicy chillies is so addictive and perfect for the cold weather here in Auckland at the moment. The chewy noodles adds to its character which makes it one perfect comfort meal. This is not your normal beef noodle soup but definitely a better version! 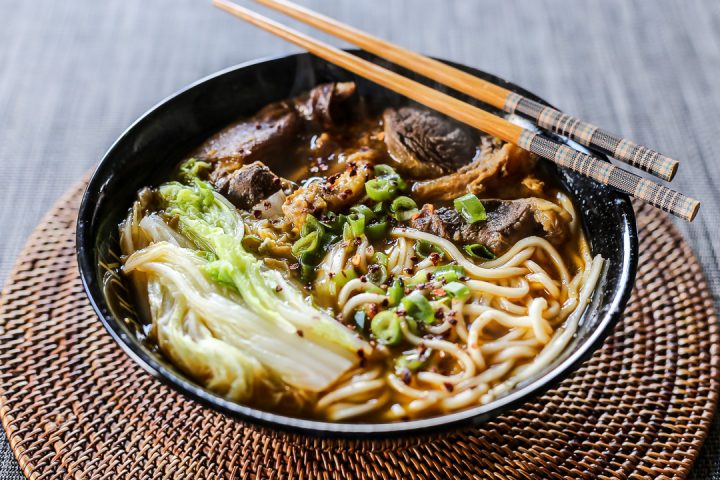