When you’re out of tteok and craving for some Tteokbokki you will always find a way! Rice Paper Tteokbokki Hack is a method of making tteokbokki when you don’t have the tteok, using rice paper as an alternative by dipping them in water and rolling them into small logs and cutting into sections.

In my article a couple of days ago I mentioned that people become so creative during this pandemic times. If we are talking about home cooking most of us try to use whatever we have in the pantry just to avoid getting outside, these random food items we have as leftovers are then combined and prepare them into something delicious. That is just one aspect of being creative, another aspect that is even more creative is how people create something out of a different thing, so what does that mean? Well, our post for today is a good example for that, making Tteok from Rice Paper, yes you can do that and it is quite hot on social media. At first, I was sceptical on this one but my daughter had insisted since she was craving for some Tteokbokki and we did not have some Tteok around. She asked me if we had rice paper and luckily, we did.

My daughter had showed me several photos of the finished product and I was quite impressed already by the looks of it. She then starts making them and indeed it looks like the real thing when rolled correctly. It is quite simple, first all you need is to dip that rice paper in water just enough to moisten it,

you then fold it in half, if not it will not be thick enough.

Once folded in half, all you need to do is just tightly roll it until the very end until you have a thick piece.

You then cut it in half then you have two pieces of tteok.

Simple as that, just repeat the process multiple times until you have enough.

Now it’s time to cook and test if it will hold its shape while cooking as well as retain a similar texture to the real tteok. Surprisingly it did hold its shape and what’s even better the texture is chewier than the real thing but rice paper tteok doesn’t thicken up the sauce compared to the real thing, so to address that all you need it just add some rice flour or cornstarch in your sauce if you will be using this.

My daughter had made similar attempts in making her own tteok before, from making them from scratch, she tried them all. So far this is quite the easiest one to make as long as you have that rice paper of course.

Rice Paper Tteokbokki Hack is a method of making tteokbokki when you don’t have the tteok, using rice paper as an alternative by dipping them in water and rolling them into small logs and cutting into sections. 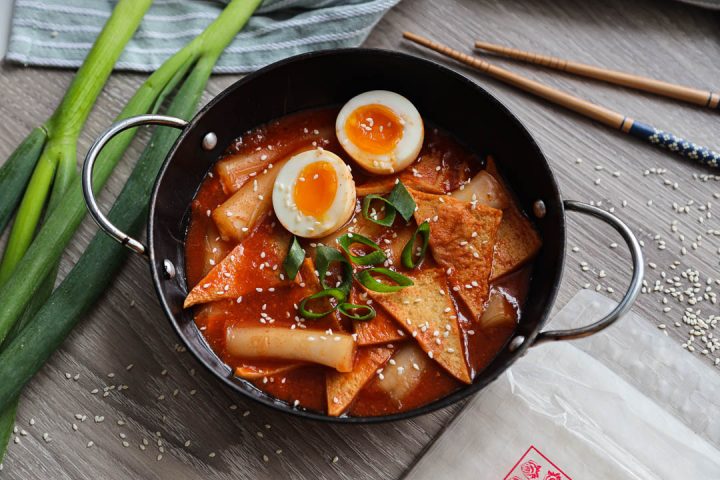