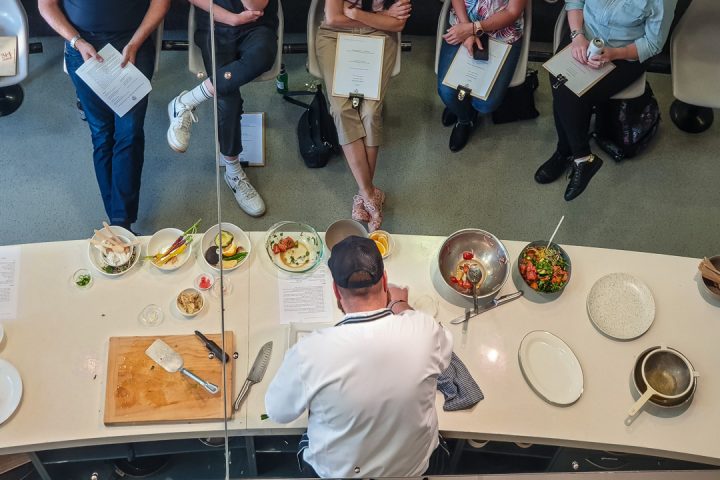 Yes, we are here again, back for the second time and like before it was another team building event.  It was an amazing day, I guess everyone loved it, even those who does not eat seafood as Auckland Seafood School provisioned other options for them.  Like the usual, it started with some drinks and cocktails in their lobby, there was a good selection of beers and wines plus a nice platter with marinated mussels, smoked fish and other marinated food like artichokes, olives and sun-dried tomatoes to name some.  There was also some cheese platter with an amazing blue cheese which I think is a Kapiti Kahurangi, as well as other cheese like brie and Dutch smoked.  After several minutes of socializing outside the action begins.

We were ordered to go to the classroom so we can watch and learn what we will be cooking for our dinner.  Last time the class was held by Chef Colin Doyle but today we had Head chef, Paulie Hooton, a chef with a 25 years’ experience most of it gained in some of New Zealand’s most iconic restaurants.  His CV includes Head Chef at the award winning The Oyster Inn on Waiheke Island, gigs on Auckland waterfront eateries like Euro, Soul Bar & Bistro, The Food Store, Pontoon plus Tay Street Beach cafe in Mount Maunganui.  Good creds on his name, definitely my colleagues learned a lot on that day, even I did learn some tips and tricks that I am using now.  He was a funny guy, I think better than the first chef presenter we had before, which made the whole thing a very entertaining yet informative event.

What he prepared was Salmon, carrot and ginger poke bowl for the first dish then Pan-fried market fish, citrus caper butter and Panzanella salad for the second one.  Both were amazing dishes and easy to prepare.  The Poke Bowl is basically more of an assembly but there were components that was cooked like the carrots and baby kale where it was quickly tossed on coconut oil and ginger.  Poke bowl was served with sesame oil tossed salmon, chilli, sprouts, peeled carrots, coriander, avocado, pickled ginger and the ginger carrot kale.

Second dish the Pan-fried market fish, citrus caper butter and Panzanella salad has more elements to it and for most this would be a challenge.  First element was the toasted ciabatta which was drizzled with olive oil.  Next element is pickled onions with anchovies, followed by grilled asparagus and courgettes then pan-fried fish and completed with a lemon butter caper sauce which was cooked as well.  Preparation was a lot but once it all brought together it’s like the Carnival of Brazil in your mouth, tasty, vibrant, contrasting textures and flavour, plus its aromatic.

Then were off, we got to try his dish and were on our own.  We were asked to team up, so I divided them into teams from different discipline and since all of us are from the IT Department I made sure each team had one engineer, one developer, one service delivery and one from operations/projects.  What I should have done together with that is make sure they are ethnically diverse as well because most of the Asians for some reason became my team member and it was great as they were great sous chefs, all of them cook at home so it was not a problem for me, they just went straight to the cutting as I cook each elements of the dish.  They also did the plating.

Since that was the case we finished cooking first, not that it’s a contest of speed, but we just finished quickly and I guess for those two dishes it was around 30 minutes, which means we can sit, relax and continue drinking as we wait for everyone to finish.

So how was the food, well it was spot on, great flavours, I especially liked the Fish salad, it was a full meal on its own, very tasty and the bread alone was enough for me.  As for the poke bowl, it was surprisingly good as well, did not thought it would taste like that due to the ginger and carrots on coconut oil, apparently it did not taste like such and flavours seemed to have mellowed down after cooking it, it was nice.

It was such a great event, it definitely was fun and a great activity for the team, something different specially for those who don’t usually cook, but even for those who cook everyday like me, you will definitely learn something new. 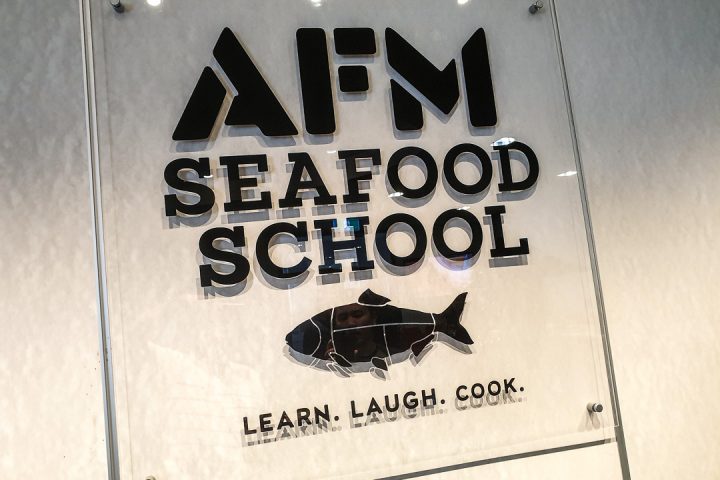