Chinese Stuffed Eggplant is a type of a dim sum prepared with eggplants stuffed with seasoned minced pork and/or prawns served with an oyster and soy sauce mixture.

The last time I tried this dish at Wong’s Kitchen, I decided to make it at home, it’s such a nice dish and perhaps the best way to cook eggplants, it just soaks a lot of flavour in a texture to die for.  There are many dishes around the world similar to this like the Turkish Karnıyarık, Azerbaijani Badımcan dolması, Iranian Karni Yarik and Italian Melanzane ripiene to name some but perhaps this Chinese version came first.  And if you ask me why, it is because the first written record of eggplants is from an ancient Chinese agricultural guidebook from the Northern Wei Dynasty and that was around 544 CE.  And if you have a chance to read that book it was stated that Chinese grew eggplants like no-one had done before.

Before we head to the recipe lets talks about this vegetable? Do you know why it is called eggplant? Eggs are not purple and definitely not elongated.  The ones who named the eggplants which happened between 1763 or 1767 during the British occupation of India was introduced to an eggplant variety that looked like eggs, those were the first variants that found their way to Europe. I am not sure if that was the original variety and the rest was genetically modified but at least those were the first ones that came out hence the name.  Later on, the larger purple ones became more popular and the name was retained at least by many as other countries call it aubergine.

Now for our recipe Chinese Stuffed Eggplant, it is a popular Chinese dish, cooked many ways but tastes all similar, some shallow fry them, some deep fry them, some steam them and some cook then with the sauce.  You can find it in dim sum restaurants and in Chinese restaurants, steamed ones are usually enjoyed on its own as it is a lighter version of the dish but for the others take it with rice as it is quite oily, and rice helps absorb that extra oil.  In my personal opinion I love the shallow fried one as it keeps the edges crispy while making the insides very soft, making the whole experience even better, not just an explosion of flavours, it’s also an explosion of textures.

Chinese Stuffed Eggplant is a type of a dim sum prepared with eggplants stuffed with seasoned minced pork and/or prawns served with an oyster and soy sauce mixture. 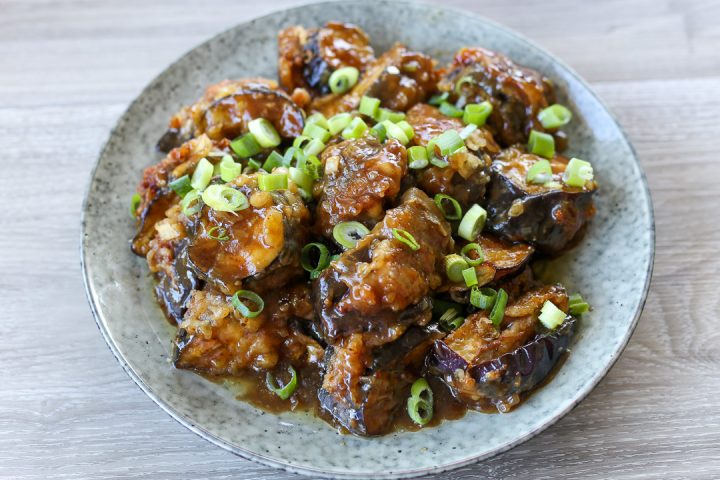