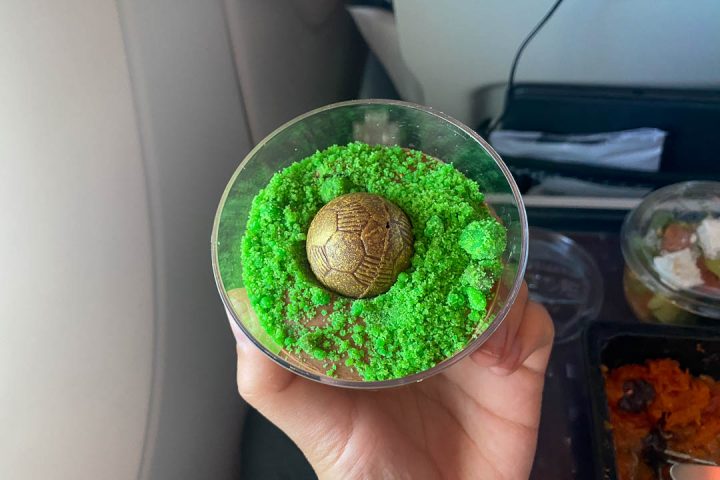 Qatar Airways is known for its high-quality in-flight dining experience. The airline has won numerous awards for its food and beverage service, and it is dedicated to offering a wide variety of delicious and culturally diverse meals to its passengers.

One of the unique aspects of Qatar Airways’ in-flight food service is its focus on using fresh, locally sourced ingredients. The airline has a team of professional chefs who work to create menus that highlight the flavours and cuisines of Qatar and the Middle East, as well as international dishes.

In addition to offering a variety of main courses, Qatar Airways also provides a selection of snacks, beverages, and desserts to its passengers. The airline’s in-flight menu includes a range of healthy options, such as salads and fruit platters, as well as more indulgent treats like pastries and chocolates. We are lucky enough to try this when we had our flights from Auckland to Zurich, it was a long flight so expect a lot of food servings along the way, some were good, but others fall of the mark. It is hard specially at 30,000+ feet up in the air food is sometimes perceived as being of lower quality than food served in other settings becuase food are prepared in advance and packaged for transportation, which can impact its taste and texture. Additionally, the cabin pressure and dry air inside an airplane can affect a person’s sense of taste, making food taste differently than it would on the ground. Finally, the limited space and resources available on an airplane can also make it more challenging for airlines to serve fresh, high-quality food compared to what you get in restaurant, so there is more science involved in serving your meal than just making them taste good.

So as mentioned there are good ones and not so good ones and here is what we had during this return flight to Zurich. Take note as this trip happened late last year, I already forgot the names as I forgot to take a photo of the menu unlike the other Airline Food reviews we did in the past. Let start. 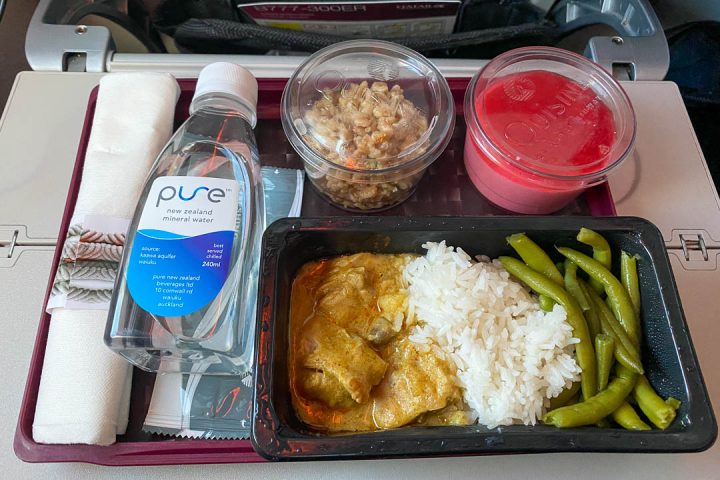 First meal, to Zurich, some sort of chicken curry as mains, a rice or quinoa salad and mousse for dessert. The curry was good, it looks fresh even the rice, quite tasty and was spot on. Salad was OK, not a huge fan as we already had carbs for mains. Mousse was a perfect end to the set as the raspberry served also as a tangy palate cleanser. Love this meal. 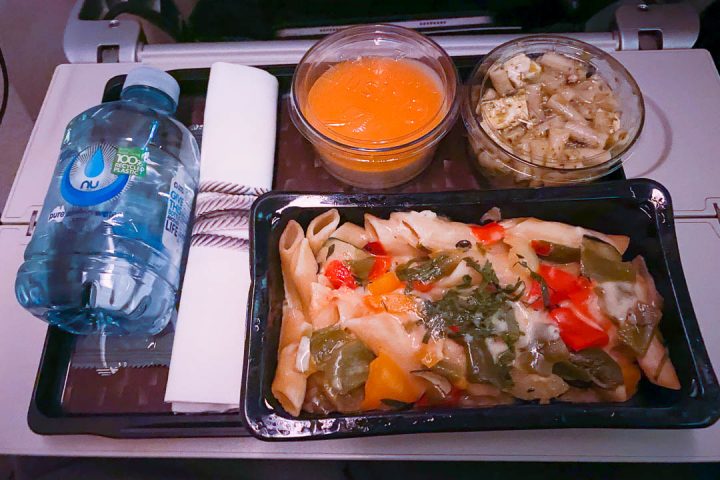 Second meal was dinner and since we were seated at the rear end of the plane (our usual preference) there were no other options but a vegetarian meal. What was served was a vegetarian pasta which I find a bit bland but with salt and pepper it was Ok, it was a bit oily as well. Then for the side it was another carb where a macaroni type pasta is served with olive oil and feta cheese, again not a fan of carb on carb but it was redemption when it came to the dessert, we got a mango mousse or cheesecake can’t recall but this one was good. 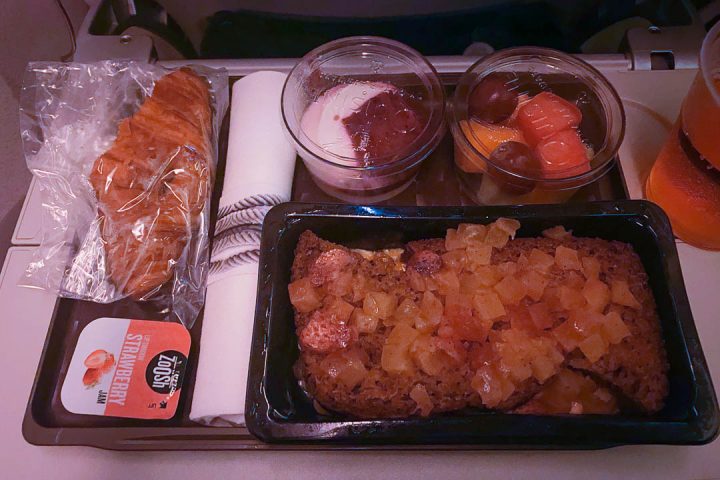 Now for the final meal towards Zurich was breakfast and Croissant alongside French Toast with apples and strawberries was served. I was not expecting this to be a restaurant quality one, so expectations were not that high. French toast was served with a brown bread, it was already soggy when it was served to us, but it was quite good, not too sweet and the fruits added a nice touch. Side was a fruit salad and dessert were pannacotta, probably a strawberry, this was nice as well. Overall, the meal going to Zurich was OK, it would have been better if the appetisers were not made mainly of carbs. 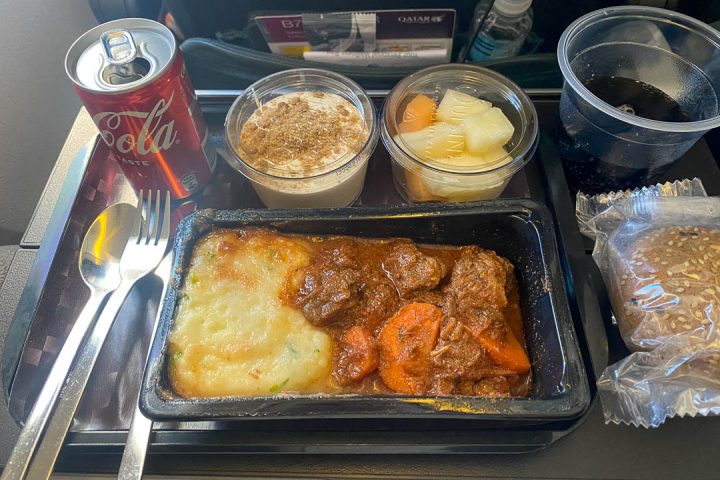 Now going back to Auckland was a same affair, meaning we had three meals as well starting form Slow Cooked beef with parsley and Mashed Potato, like our first meal going to Zurich it was amazing, I guess anything saucy is good for airline meals as they have enough sauce not to be dried out. The beef on this meal was tasty and fork tender. It was served with a dinner roll topped with sesame seeds which they call infused bread, this was good as well, better than the croissant we had earlier. Then for side we had a fruit salad and Espresso Coffee Mousse, perfect way to end this meal. 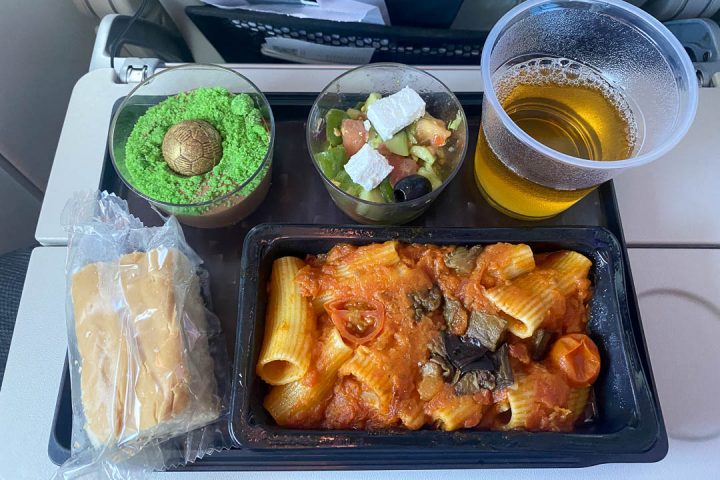 Next meal was a Tomato and Eggplant Pasta, again this was quite nice, rich tomato flavour which reminds me of the simple yet delicious tomato pasta we had in Venice many years ago. It was served with a Greek Salad and a sponge like bread which was quite dry.

For dessert since this trip was during the FIFA World Cup 2022, the mousse was topped with some sort of green stuff that resembles a turf with chocolate soccer ball, it was a nice touch to celebrate the games. 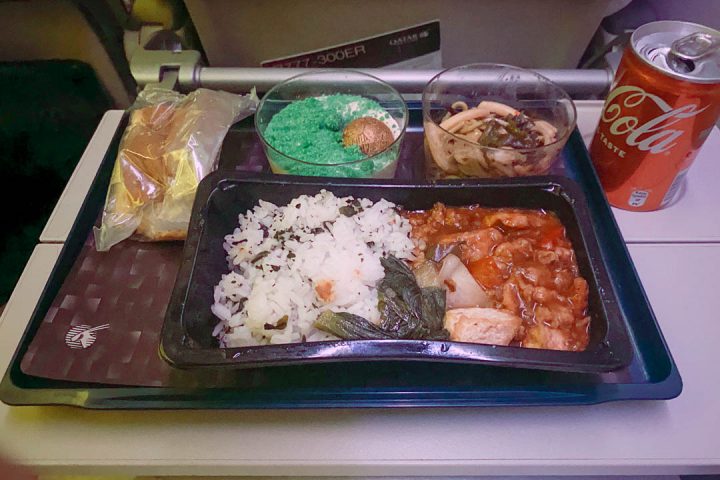 Then on to our last meal just before touchdown was this Kung Pao Chicken with Wakame Rice and Bok Choy, again this was great, lots of nice flavours. Salad was made with cold Udon noodles with black fungus sesame seed, this was good as well, balanced flavours just to kick that appetite. And the dessert was like what we had earlier, the World Cup special mousse.

Overall, Qatar Airways’ in-flight food service is designed to provide passengers with a culinary journey that is both enjoyable and memorable which it did in most parts. We were treated with mostly delicious and diverse range of dishes that made our flight more comfortable and enjoyable. I just hoped that appetisers in the future will not be made with carbs if the mains served were carbs too, or at least give choice to the passengers as some people might like it this way.