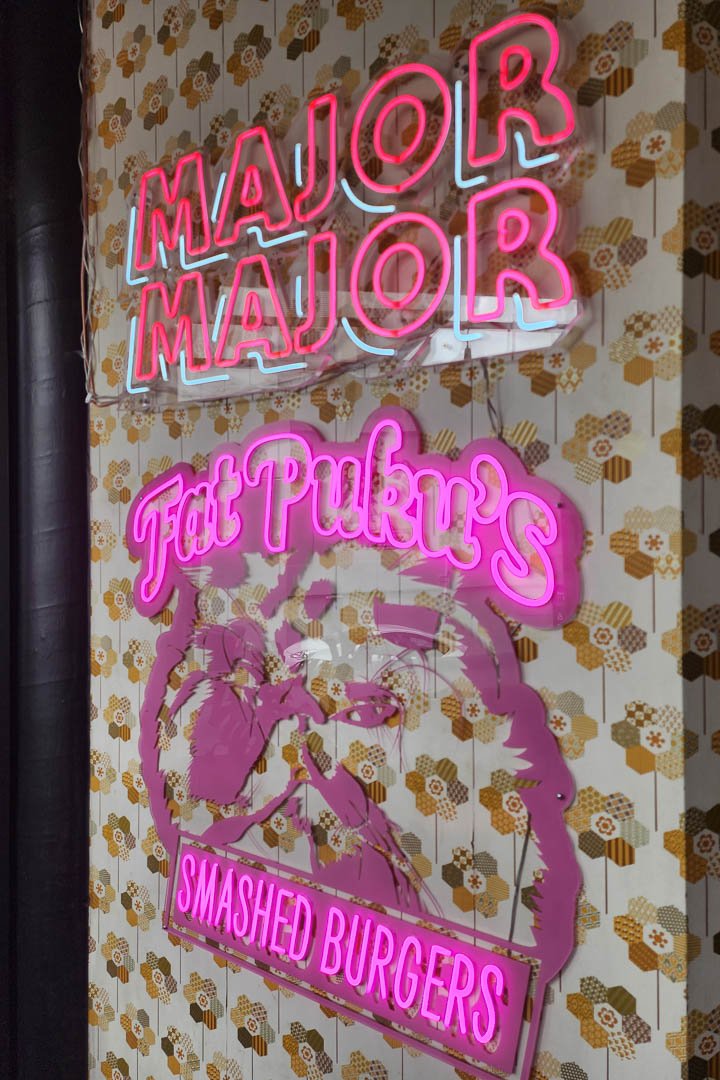 According to them they are “New Zealand’s first true smashed burger aficionados. We don’t care about gimmicks or stunt burgers. We do the real thing the real way”, it is a bold statement, but does it hold true? Were here to find out. Fat Pukus is a new addition to Auckland’s Burger scene, and it took over the place where Al’s Deli used to be, a Canadian inspired restaurant that used to make great burgers, so is this new place worthy of what it replaced? Located in Upper Queen Street, just at the corner of City Road, if you’re coming from Lower Queen Street, it will be calorie burning walk which compensates with the food you might be having.

A place created by two burger-loving 80s kids raised on old-school hip hop, sneakers and cult American movies; you will instantly notice from the interior decoration as you come in. Wall paintings adorn the place, original recreation of classics where it is overlayed with 80 pop icons like the “Napoleon Crossing the Alps” but with Napoleon Dynamite on Jordans on it, “Girl with a Pearl Earring” with Ultimate Warrior Face paint, “Hands Of God And Adam” where God is handing over burgers to Adam, and “Virgin and Child with Angels” with Notorious B.I.G. being crowed. There are also 80’s toys on display like He Man, Thundercat’s, Ninja Turtles and Wrestlemania Action Figures to name some. Add to that a fully working Nintendo 64 plugged into a Sony Trinitron TV, this place certainly gives the 80’s vibes and brings back a lot of my childhood memories.

Then we have the menu, a simple one pager with their specialty, the smashed burger in 6 varieties, French fries and drinks, that’s about it. It is a good sign; they are definitely focusing on what they love to serve away from other distractions of other menu items that will just be a clutter not just on the menu pages as well as in the kitchen. So, it is obvious what we grabbed, basically burgers, fries and drinks.

We got three varieties first was the Pukubuster (NZ$16.90), a burger made with Habanero mustard, two smashed beef patties with cheddar cheese, homemade pickles, onions and mayo on a potato bun. 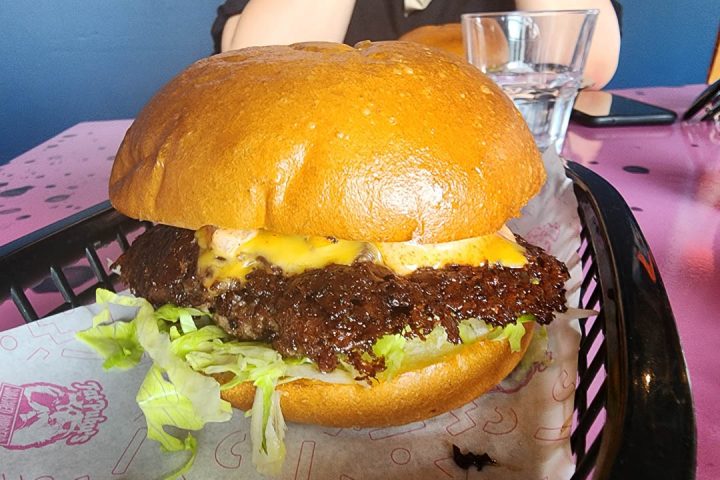 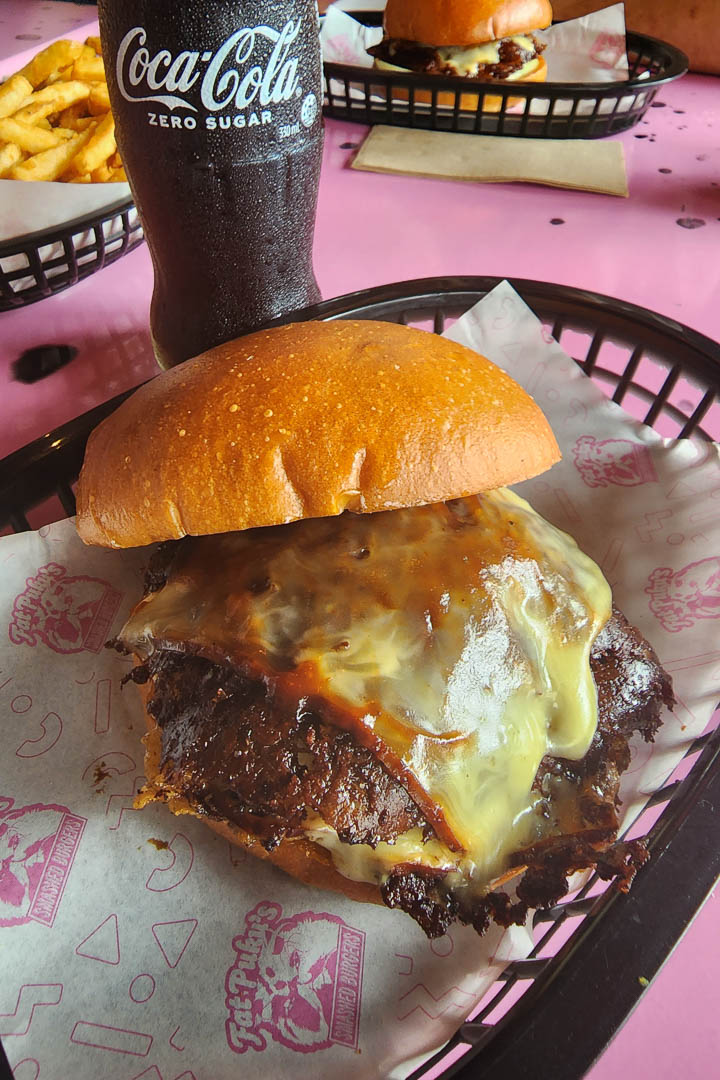 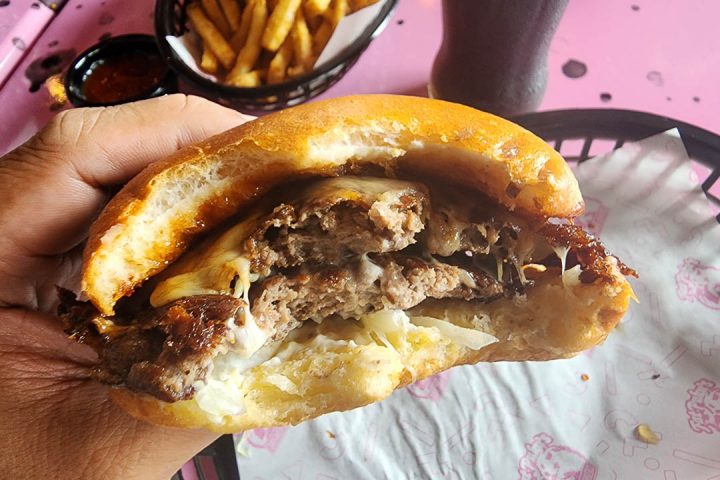 Definitely even the burger names have the 80’s vibes even the other burgers we did not grab like the Fat Puku, Notorious V.E.G. and Chuck Norris.

For the fries they have two options, and we got a couple what they call Skinnies (NZ$5.90), which is offered in two different seasonings one with salt and another one with frost seasoning. 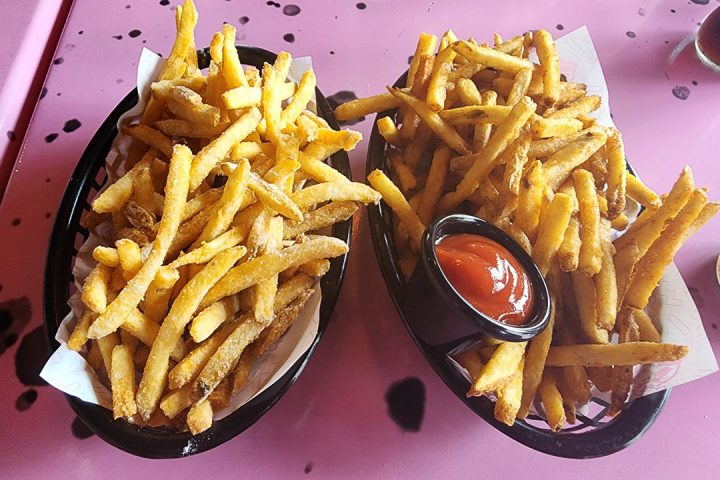 Now let’s get to the verdict, TL;DR, this is one of the best if not the best burger I had to date. Now on to the details, it is a real smashed burger, crispy frills around the outside, tender taste in the middle and every patty comes out unique meaning shape is irregular and not perfectly McDonalds patty circle. The edges is the champion here, its crisp to the point the meat juices caramelised giving it a nice sticky chewy texture like a toasted marshmallow like the edges of the steak when it hits a hot plate making that Maillard reaction, giving it a distinct flavour, essentially cooked to a point where proteins attack reducing sugars to cause browning and create the best meat flavour possible, add to that the potato bun they are using which is not bready, has a good bounce and great texture that is never crumbly. Burger also does not rely on sauce and cheese too much, it’s just there to compensate the flavours and not overpower the burger. Burgers may look simple and small, but it is the perfect size, enough to fill you up without the feel of guilt like what other enormous burgers give, patty thickness is perfect, so one bite gives you all the flavours needed without the mess of dripping juices. It is one magnificent burger, I think from now on this will be my go-to burger, unless someone does it better.