Mark Wiens, Tikim TV and many food vloggers made this Sotanghon Soup popular, and now we are recreating this in the comfort of my own home so you can do it too. Quiapo Style Sotanghon Soup is a type of sotanghon soup prepared with mung bean vermicelli noodles cooked in a broth made by simmering pigs head and pork bones for long periods of time together with annatto, garlic and onions. 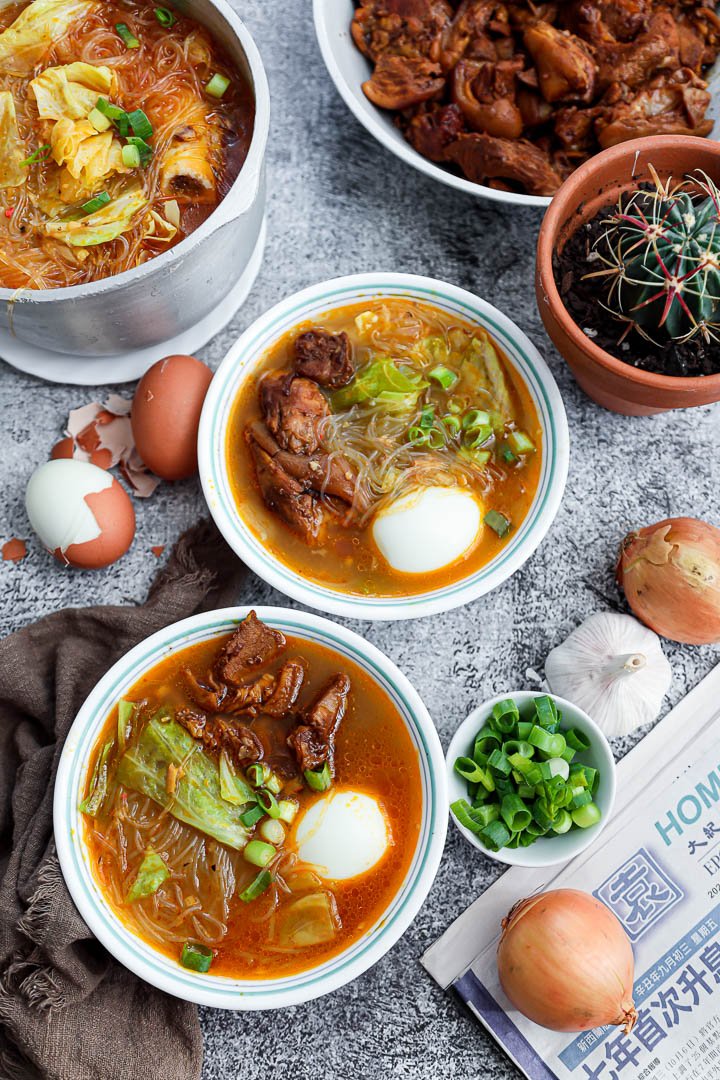 If we talk about sotanghon soup the ones we immediately visualise is that red orange noodle soup served with either chicken or prawns, but there is a new kid in town and its taking the streets of Quiapo by storm, not made with either proteins mentioned but with pigs head instead, it’s called the Famous Sotanghon Soup or Quiapo Style Sotanghon Soup. It has been in the social media since 2017 and it had appeared in Mark Weins YouTube channel as well as other vloggers in the Philippines like Tikim TV and TeamCanlasTV, it has been featured in many TV shows as well in the Philippines. 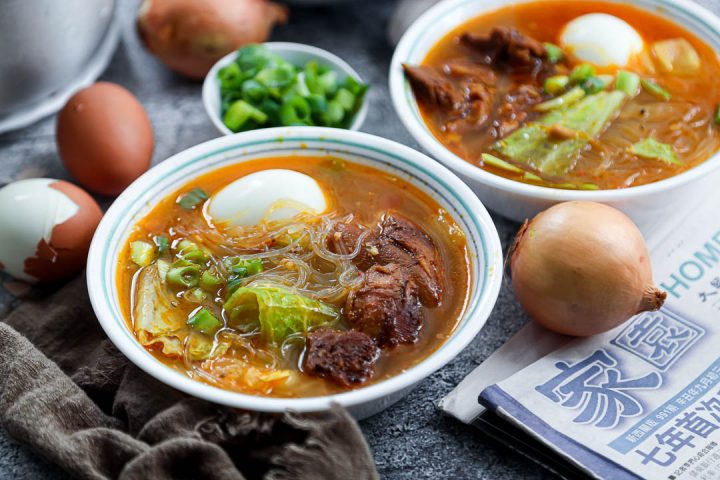 A dish created by Rosario Hilario or who they call Nanay Rosa and sold at her street stall called Rosa’s Pancitan in Hidalgo Street Quiapo, Manila. Before its popularity, Nanay Rosa have been selling food since 2003 and started as a street peddler selling spaghetti, macaroni and variety of kakanin. There was no luck during the early days until the power of social media kick into action, now she is selling at least 2000 bowls of this soup every day. What made this really popular apart from the social media mentions is the affordability and taste, each bowl costs PHP 40.00 (around US$ 0.70), if you add egg there is an extra PHP 10.00, if you want Pork Belly it’s an extra PHP 20.00, and if you want extra soup, then it is unlimited, you can drink as many soup as you desire. As for the taste many say it tastes like a bulalo without the sebo since the broth is made by boiling pigs head and pork bones for long periods of time. 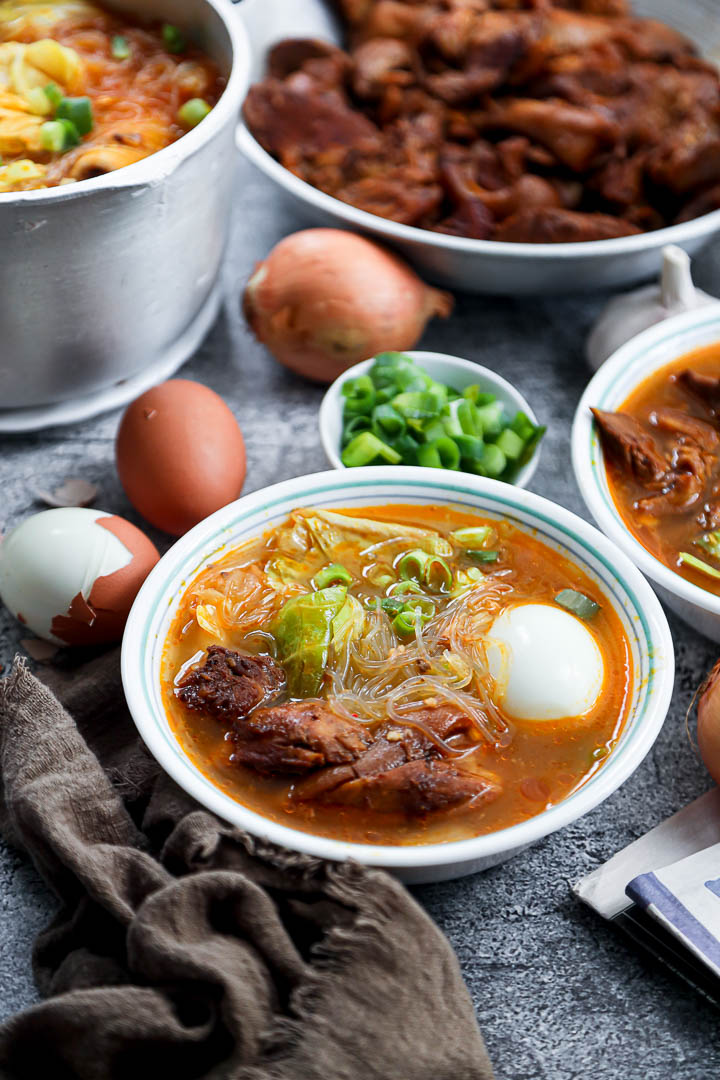 Today we will be making one at home and instead of pigs head which is quite a rarity here, we will just use pork back bones for our stock in combination with pork jowls. Apart from that the process looks similar to the usual sotanghon that we know but because the meat used is different which gave it a better edge. 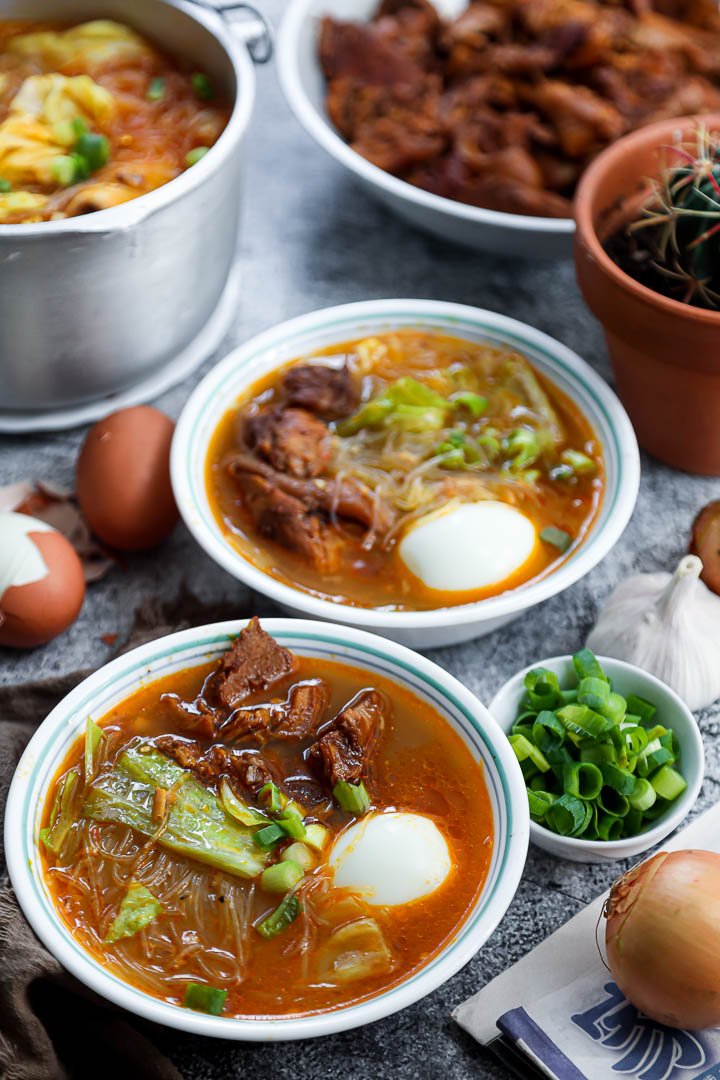 Quiapo Style Sotanghon Soup is a type of sotanghon soup prepared with mung bean vermicelli noodles cooked in a broth made by simmering pigs head and pork bones for long periods of time together with annatto, garlic and onions.