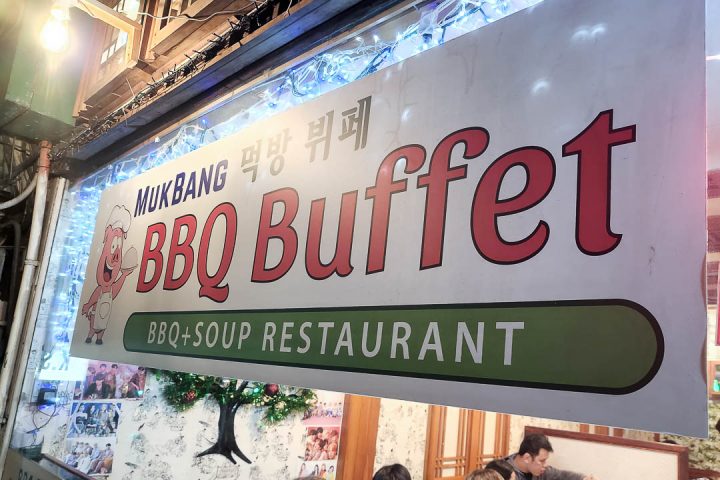 Aptly named is what I can describe this place, a restaurant where you can do your “mukbang”. So what in earth is mukbang? Well, for those who don’t watch a lot of You Tube and those who don’t have a good background in South Korean culture, mukbang or meokbang (먹방) is a combination of the Korean words “eating” (먹는; mugneun) and “broadcast/(TV)show” (방송; bangsong), so in short its eating food in front of an audience but not just any food, mukbang is synonymous to large quantities of food and it all started in 2009 and now has become a trend especially in YouTube. Now why do I say you can do it at this place? Well it is a buffet restaurant mainly serving Korean Barbecue and Hotpot.


I had been here for a couple of times and definitely one of our favourite Korean Barbecue places, because of the variety, cosiness and the place was clean if comparing to other Korean Barbecue places in Auckland, it was very affordable as well, at NZ$32.00 a pop, it’s hard to beat this price. 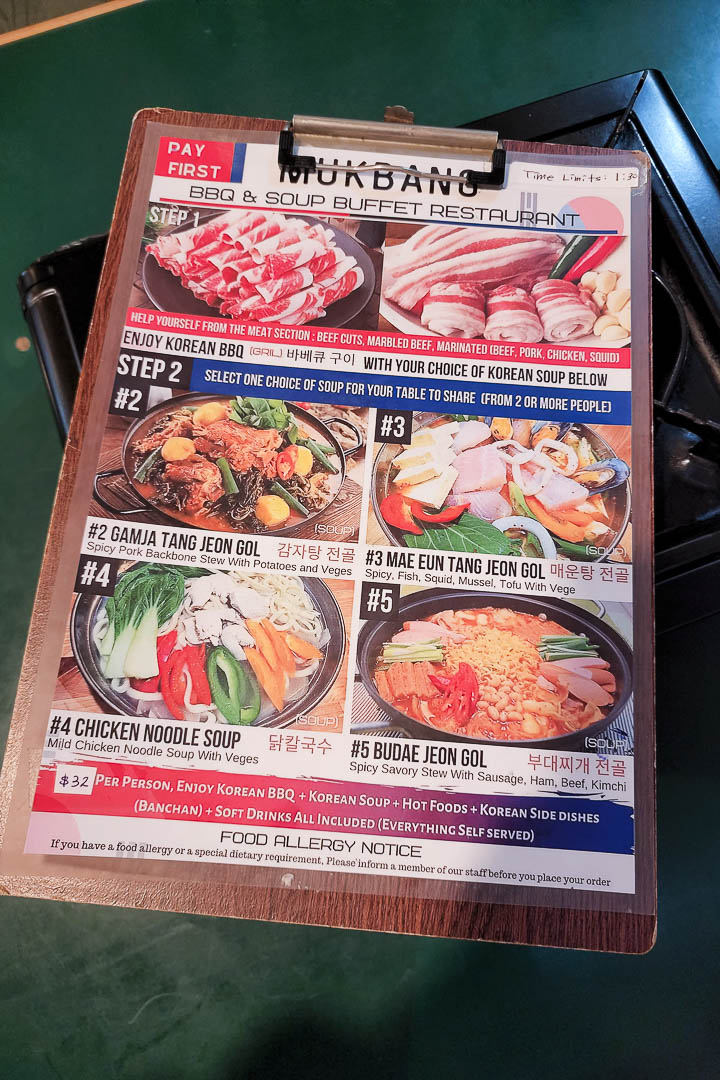 How it works in Mukbang is quite different, first is the usual one where you can grab any meats or ingredients you want for your table top grill and enjoy the Korean Barbecue but they also ask you what Jeon Gol you want to have. There are 4 options, Gamja Tang Jeon Gol (Spicy Pork Backbone stew with Potatoes and Vegetables), Mae Eun Tang Jeon Gol (Spicy Fish, Squid, Mussel, Tofu and Vegetables), Chicken Noodle Soup (Mild Chicken Noodle Soup with Vegetables) and Budae Jeon Gol (Spicy Savoury Stew with Sausage, Ham, Beef and Kimchi). That’s not all there are also cooked foods, side dishes (banchan) and soft drinks and it’s all included in one price. 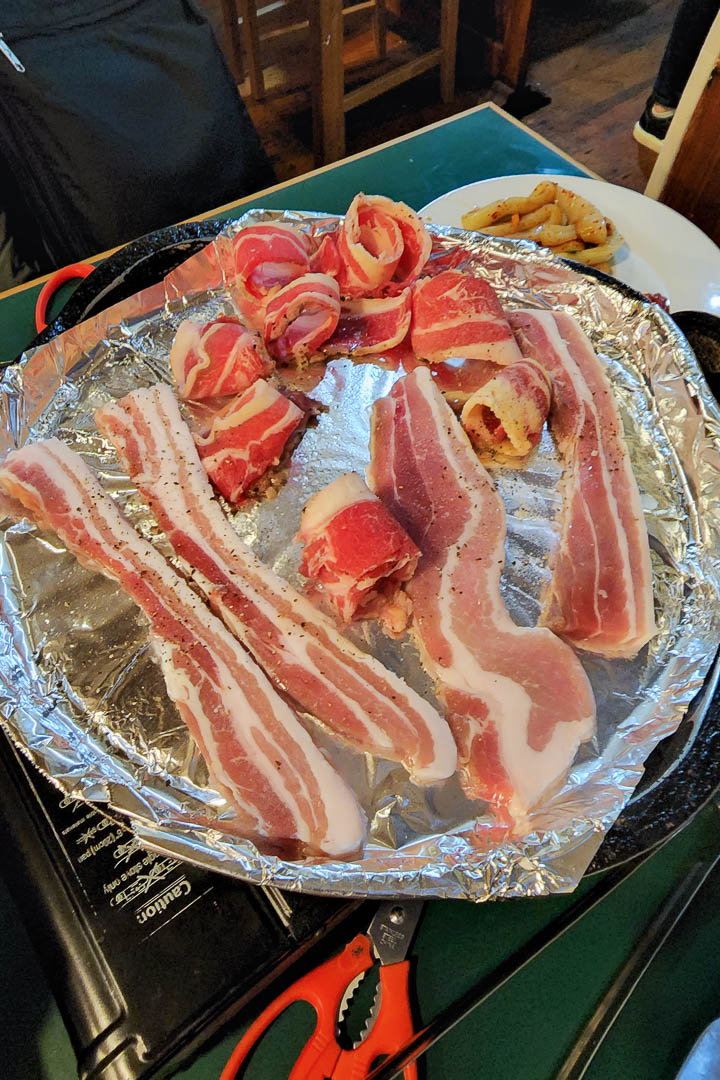 In both instances that we were here, things are quite consistent, the food, service and cleanliness. We tried all different soup options apart from the Chicken Noodle Soup and what I can suggest if you have one option is to get the Gamja Tang Jeon Gol, they are amazing, the pork meat from the bones are so tender, they fall of the bone they are very tasty as well. Now one might think that this is a single serving, don’t worry they refill the soup if you want to and for the meat, since there are endless varieties of meat on the counter you can use them on this stove top pot so you soup dish making it unlimited as well. I also suggest if you are torn between the Gamja Tang Jeon Gol and Budae Jeon Gol just get the Gamja Tang Jeon Gol, there are instant noodles on the counter that you can get and use on this soup making it something similar to Budae Jeon Gol. 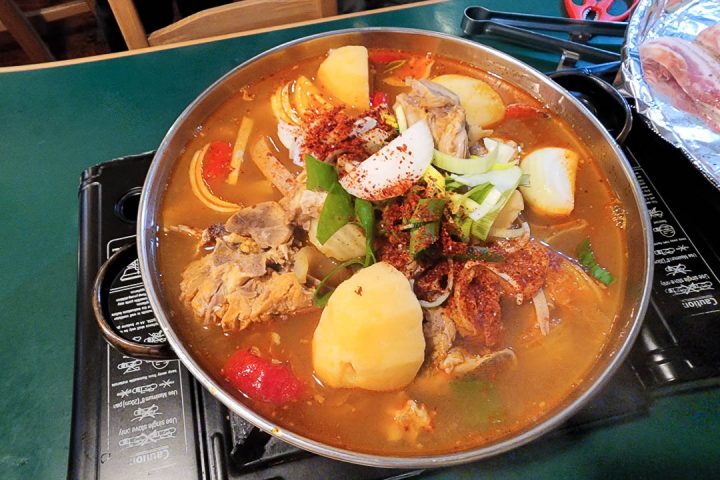 As for the service, I can’t praise them more, one of the visits we had here was with a vegetarian and they do catered something special for her, preparing at least three hot dishes for her as well as her own Jeon Gol. 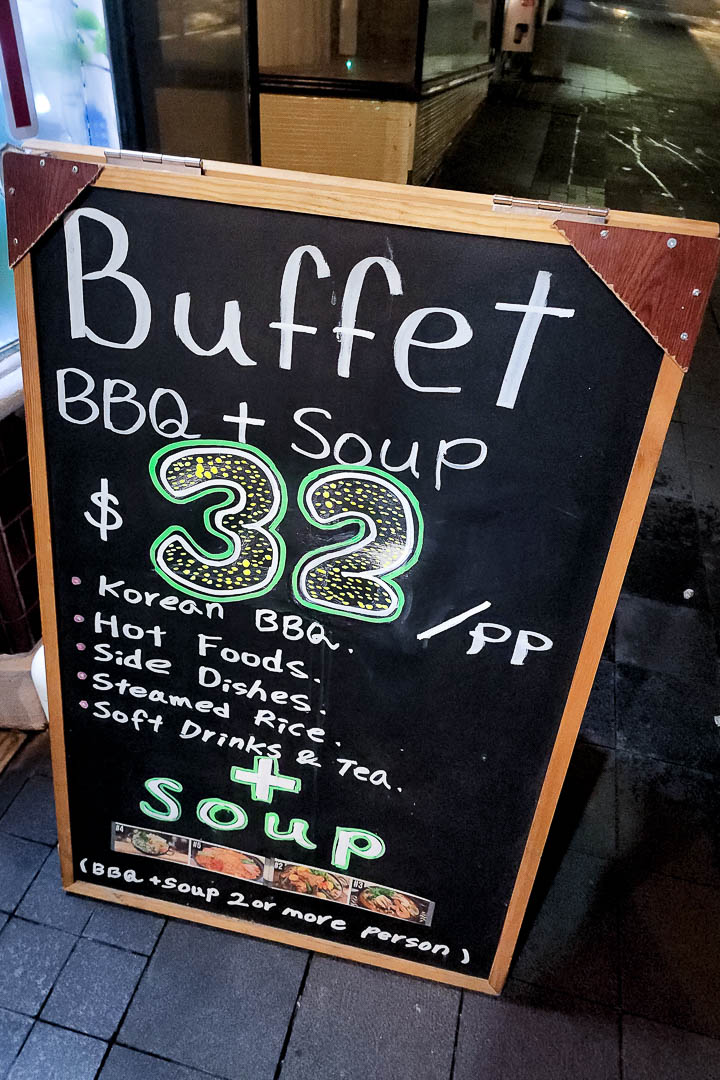 We loved it and highly recommend this place, it is one good value for your money and at these times, places like this is quite hard to find. When you visit this place make sure you secure a booking as the place is quite famous and it is always packed specially for dinner.