Most of you had watched Parasite, for those who haven’t I suggest watch them first to understand what this dish is all about. Ramdon or Jjapaguri is a Korean dish made by combining two instant noodles called Jjapagetti and Neoguri cooked together.

Ramdon from the words “ramen” and “udon”, a dish made by a glorious combination of hard to pronounce and even harder to translate Korean dish Jjapagetti and Neoguri. In Korea it is called Jjapaguri from the words Jjapagetti and Neoguri. Basically, it’s a simple dish where commonly two of Koreas popular instant noodle brands the Chapagetti and Neoguri are cooked in one pot, traditionally steak is not added but with the popularity of the movie Parasite, newer versions have it. This dish is a yummy combination of the signature chewy Korean noodles in a Jjajang sauce which gives it a spick kick and tons of savouriness.

As mentioned Ramdon is not traditionally served with steak in Korea, but in the movie, it was served with Hanwoo, a highly regarded premium beef because of its high palatability and desired chewiness”, it is more expensive than Wagyu beef. Both Chapagetti and Neoguri are very inexpensive instant noodles so usually they are consumed by the masses rarely the upper class. In the movie Mrs Park requested to their house helper that this beef to be added to the Ramdon, a significance how differently the two families live, the rich can’t stand her kid to eat cheap instant noodles, so she requested for a nice beef cut for a topping.

This dish is already popular even before Parasite was released. Jjapaguri first gained popularity on the internet and in Pochas (Korean Bar) in South Korea when it was featured on an episode of Dad! Where Are We Going? in 2013. Then in 2019, Darcy Paquet, the translator of the film Parasite, translated the dish as Ramdon. Since then, these two noodles become popular outside of Korea making the instant noodle market within South Korea even massive. Here in New Zealand, there is even a point in time where these two noodles are hard to come by, it was sold out every time we go to Wang Supermarket, proving the popularity of this dish.

Today we are making Ramdon or Jjapaguri after getting our hand on a new stock Jjapagetti and Neoguri from the Korean Supermarket but we are light years behind the net worth of Mrs Park so we are not importing Hanwoo beef but instead we are using a good cut of beef instead for this dish, we will be using rib eye and not sirloin. 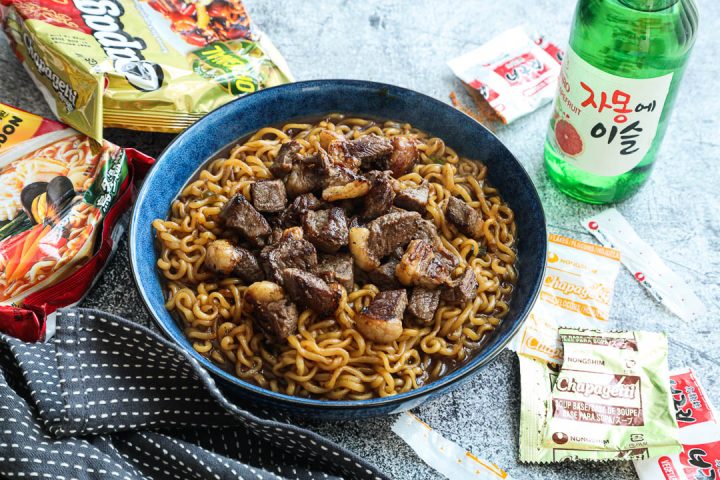