The Filipino Chinese Fried Chicken that probably started the whole Filipino Fried chicken craze! Copycat Savory Chicken is an Ang Sarap take on the classic Savory chicken that was popular during the 60’s to 80’s, a Chinese style fried chicken with a Filipino twist made by simply marinating it in Asian aromatics and soy sauce.

Even before the lechon manoks of Baliwag and Andoks existed, even before the Chicken Joy or Chicken McDo became popular, the Filipinos have this, the Savory Chicken. I am not sure when was the last time I had one but for some reason I still vividly remember the takeaway box or the white signage on its restaurants with the words “The Original” in Brush Script font then followed by a large red all caps word “SAVORY” in Rockwell font. I am pretty much sure those Filipinos who lived in Manila that are near my age would remember this restaurant as they offer great if not the best chicken during those times.

The Savory chicken existed since the end of World War 2 by four brothers, the Ting Brothers. During those days they established a small “panciteria” in Quiapo where it serves mainly, Lomi. The place quickly became popular so the Ting Brothers expanded their menu and of the them was this chicken served with a special gravy, this dish was the talk of the town and people from other places flocked Quiapo just to give it a try. The brothers then decided to open the first Savory branded restaurant in Escolta and the rest was history.

So, what is this Savory Chicken?
Basically, it is a Chinese style fried chicken adjusted to the Filipino palate, like most amazing chicken dishes, the meat is tender, moist and extremely tasty, even the thick breast section which in most chicken are tasteless. Skin is usually thin yet crisp, it is then complemented by the umami from the gravy. Like most Chinese food where it is common for a cooking vessel to be used for really long times, the traditional Chinese Wok to be used in making this Chicken needs to be used several times to capture the authentic flavours of this dish. The main reason for that is to absorbs the soul of whatever was cooked there time and again, like Wok Hei, Tea Stains on Tea Pots or even Master Stock. 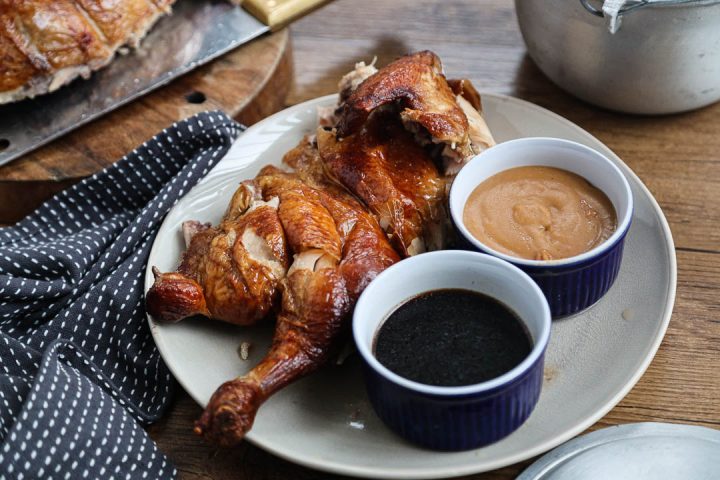 Now, I might not be able to recreate that exact flavour at home as I don’t have a wok that cooked the same chicken for many years, what I will try to do is recreate it as much as I can using what I have. I am not entirely sure if this is the exact procedure, they do at Savoury but I have several techniques used so they meat is tasty and the skin is thin and crisp. I know Savoury fries their chicken but before that I am not sure if its processed in any other ways, for our recipe we will cook this chicken twice, first by roasting so the flavours will not be diluted in hot oil and just be concentrated on the chicken, then once cooked we will baste the outside with boiling oil to give that nice shine and crisp skin.

Copycat Savory Chicken is an Ang Sarap take on the classic Savory chicken that was popular during the 60’s to 80’s, a Chinese style fried chicken with a Filipino twist made by simply marinating it in Asian aromatics and soy sauce.