Yes, something vibrantly green can be really tasty too! Chinese Spinach Soup is a soup dish made with Chinese spinach that has been blended then cooked with mushroom, prawns and vermicelli in a stock thickened by eggs and cornstarch.

Chinese Spinach Soup, this vibrant green soup is basically a type of egg drop soup made with blended large leaf spinach or polunchay which gives this dish its signature colour. It is also called Chinese Green Soup, Polunchay Soup or Emerald soup and is served on several Chinese restaurants in the Philippines, not as popular as the other Chinese soups probably due to its uninviting colour to most. Totally understood why people would not like it, it’s like those green smoothies that the general public would not dare to try. Actually, I had the same reaction the first time I saw this but when I tried it, I was surprised.

Like I said it’s an egg drop soup and with mushrooms and prawns, it gives it a really nice seafood earthy flavour and does not taste like how it looks like.

Chinese Spinach Soup is a soup dish made with Chinese spinach that has been blended then cooked with mushroom, prawns and vermicelli in a stock thickened by eggs and cornstarch. 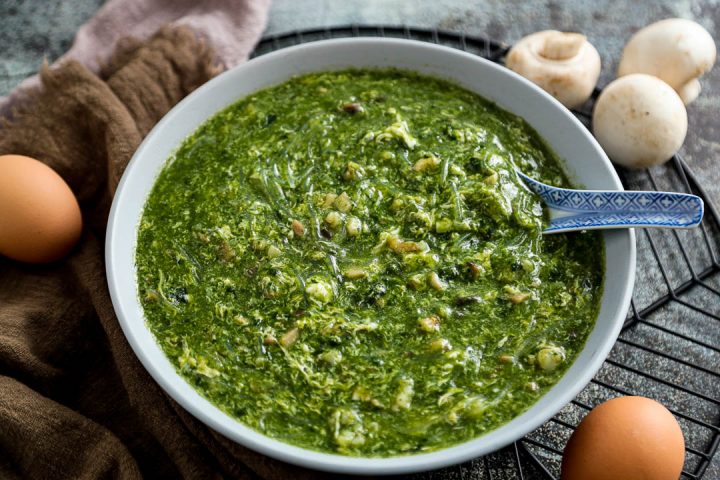