After so many requests from you guys, here is my version of the famous Wok Inn side dish. Wok Inn Sipa is a type of Filipino deep fried dim sum filled with minced pork, mushrooms and carrots seasoned with oyster sauce. Closely similar to Money Bags but designed for the Filipino palate.

For those who haven’t tried them yet, Sipa is a crispy deep-fried dumplings filled with seasoned minced pork and vegetables, it was named after a popular kids street game in the Philippines with the same name where a lead washer covered with cloth or thick yarn strands (also called sipa) is kicked up in the air multiple times until it touches the ground. The dish apparently resembles that device called sipa hence the name.

Since I started this blog, I guess there were several requests from my readers whether I have a recipe for the famous Wok Inn Sipa. While I wanted to have one and I was planning to do it for a long time, I was not confident to make it at home since I can’t exactly remember how they tasted. Luckily one day when we dined out at Thai Street and I ordered some Money bags, that dish sort of reminded me how Sipa tasted like, it sparked my memory as they were quite similar, while there were some differences, I guess it’s easy to recreate it based on my revived recollection with the help of an elusive description for this dish which I found on one of the review sections of Zomato.

Their Sipa is my favourite! Wrapped in wanton wrapper and deep-fried, these babies with sweet and salty ground meat filling, turnips, carrots, and a distinct Chinese flavour were just awesome. I am not sure what else is inside, the consistency of the filling was kind of slimy, but this dish is a must try! Mark and I both loved it! It also comes with a dip, which I think is a combination of soy sauce, vinegar, and sugar, which made the Sipa more delectable.

That even boosted my confidence that I can recreate this dish. So, I used most of what was mentioned, ground meat, yes this is the main ingredient but the key here is the lean meat to fat ratio. Carrots, this makes sense as well especially when you see pictures online with orange dots on it. Turnips, probably it is more likely to be water chestnuts specially if it’s just used for the texture since turnips don’t have flavour, water chestnuts are also common in the Chinese cuisine. For the taste it was mentioned that it was sweet, salty and a distinct Chinese flavour, it was slimy as well so probably will be a mix of Chinese sauces like Hoisin and Oyster sauce to give that taste and texture with added help from cornstarch slurry. It may also contain chives, specially from a restaurant that loves to use them, plus it’s also evident on the photos as well. So, without further ado here is how I made it. 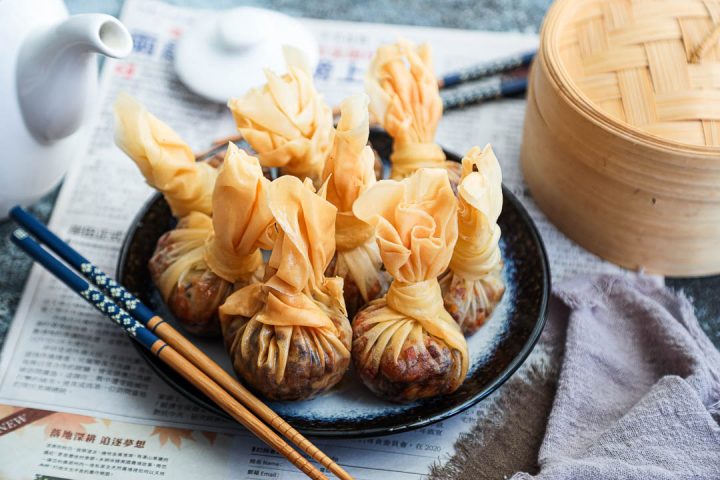