Another one for the matcha lover out there! Matcha Crinkles is a type of crinkle prepared with matcha powder along with the usual crinkle ingredients giving it a nice bight green colour.

If you follow my blog then most probably you would have known my daughters love for anything Matcha. Most of the matcha creations and reviews here at Ang Sarap is either prepared by her or made/ordered for her. Matcha Macarons, Matcha Roll Cake, Iced Matcha Latte, Matcha Bubble Tea, Matcha Ice Cream, Matcha Kit Kats, name it she probably had tried anything that matcha can be added to. One of her recent creations was this Matcha Crinkles, traditionally in the Philippines this is made with cocoa and given out during the Christmas season but I think it makes more sense to give this away, probably with a red velvet variety so it represents the colours of Christmas, red and green.

So, what is a crinkle cookie? Well, is basically a cookie with a fudgy centre and a crisp, crumbly outer layer that appears to be cracked. The original Crinkles recipe was created by Helen Fredell of St. Paul, Minnesota. It first appeared in “Betty Crocker’s Cooky Carnival” Booket in 1957 where it stated: “When we went to see Mrs. Fred Fredell’s in St. Paul, Minnesota, these cookies were so delicious we got the recipe. Thanks to her, thousands now enjoy these spicy cookies.” The original recipe was made with sugar, fat, eggs, molasses, flour, baking powder, salt, cloves, cinnamon and ginger but during the course of time, these ingredients list changed drastically omitting all of the spices bringing us to the modern version of the Crinkle.

While the popularity of this Christmas cookie died down in America, in the Philippines it continued to flourish even up to today, I can’t even imagine a Filipino Christmas without this, it’s like saying there are no turkeys for Thanksgiving. In the Philippines they even took this thing further, where a government agency, the Food and Nutrition Research Institute of the Department of Science and Technology (FNRI-DOST) conducted a research “Development and Transfer of the Technology of Iron-Fortified Chocolate Crinkles” where they saw that the Chocolate Crinkle being popular favourite can be fortified with iron to address the persisting problem on iron deficiency anaemia (IDA) remains high among various population groups. They then they conducted a supplementary feeding as an intervention program using Moonbake’s chocolate crinkles among public elementary and high school children in Subic, Zambales. These crinkles was also distributed in different wet markets, groceries and schools in the National Capital Region, Cavite and Laguna. It was also given away as gift packs by the President during that time, Gloria Macapagal-Arroyo for the poor in Malibay, Pasay. No wonder this thing is popular. 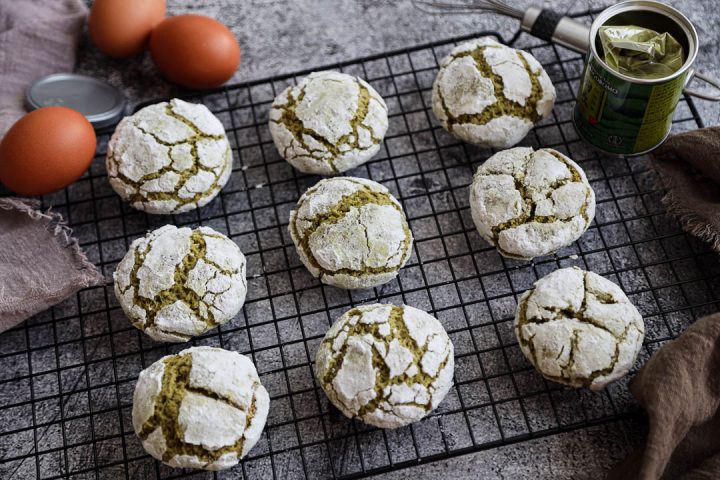 Today, it’s not just Chocolate flavour which is prevalent, there are many to choose from, like Ube, Buko Pandan, Cheese, Red Velvet and Matcha to name some. With many small businesses who sell crinkles for a living, this popularity will never stop growing and with the Filipino ingenuity and resourcefulness, definitely we will see more amazing varieties in the future. Today our recipe probably is the less popular variety, not a lot of Filipinos like the taste of Matcha, with its bitter grassy taste, most would pick other flavours rather than this but for those Matcha fanatics out there like my daughter, this recipe is for you.

Matcha Crinkles is a type of crinkle prepared with matcha powder along with the usual crinkle ingredients giving it a nice bight green colour.