Yes, you can “ube” just about every dessert that you may know! Ube Cinnamon Rolls is a type of Cinnamon Rolls filled with sweet ube jam and cinnamon then topped with ube flavoured sweetened cream cheese

I guess a lot of you might be over it, seeing ube in almost everything but for me I won’t get tired with this flavour, it is an ingredient that as a Filipino I ate a lot. During the old days, there are few ube flavoured dessert, actually the only ones I knew was the Ube Halaya, Ube Ice Cream and the use of both on Halo Halo. Nowadays with the creation of flavourings plus the effect of social media, this flavour just shot through of the roof, its purple vibrant colour and earthy sweet flavour has been accepted globally. There are many ways to use it now, I even had an early post on recipes that uses ube, in fact the time flies fast, whatever was in that list, was quite outdated now and there are so many varieties of ube recipes that came out. Today I am making one of those, the Ube Cinnamon Rolls, basically the best of both worlds where these soft fluffy sticky buns are infused with some ube goodness together with the fragrant and spicy cinnamon, honestly it was one of the best cinnamon rolls flavours to make, but I may be biased. 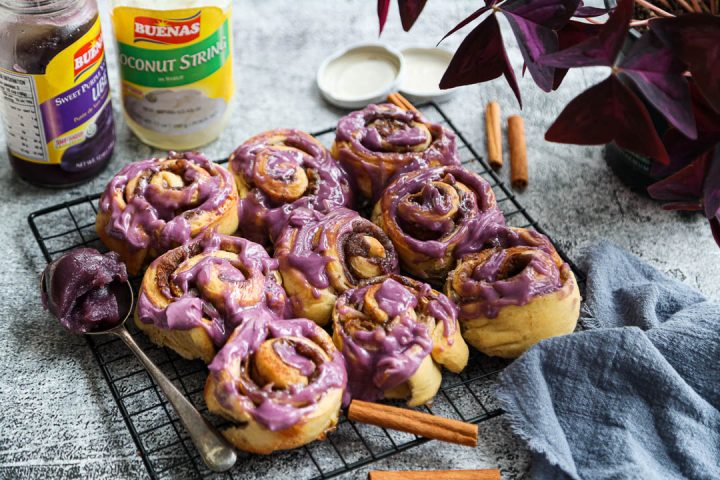