If you had a chance will you try this traditional way of cooking chicken? Pinikpikan is a Filipino dish originating from the Igorot tribes of the Cordillera region where chicken is prepared by beating a live chicken with a stick prior to cooking.

Foie Gras, Birds Nest Soup, Sharks fin and Asocena, yup these are foods that are now illegal in a several parts of the world as it promotes animal cruelty and our dish for today can be classified as one of those, but trust me there were no animals that were brutally harmed in making this dish below. I am recreating a modern take on a very traditional tribal dish in the Philippines to share an alternative way to cook this wonderful dish to those who want to try them in the most ethical manner.

Now what is pinikpikan? From the root word “pikpik” which means to beat lightly, and this is the process where the dish is prepared, beating a live chicken but before we go to that process, let us understand where this all came from. This whole process is on old ritual process for tribes facing a difficult decision. In the ritual, the spirits and the ancestors are invoked to help grant what is being asked for. Prior to cooking, the live chicken is hung by its feet, it is then beaten with a small stick throughout the whole body without breaking the skin or bones. This process bruises the chicken giving the skin a different texture and flavour which pinikpikan is famous for. Once the “pikpik” process is completed a single hard blow to the back of its head or neck is used to end its life. The chicken is then put on top of open flames to burn off the feathers and this process gives it a very smoky flavour; any excess feathers are removed by hand. Once the chicken is dressed, the chicken is opened as a ritual process where an Igorot elder examines the bile as these are believed to give a sign on what was asked during this ritual process.

I had my first-hand experience on eating this dish, I studied in Baguio for my first two years in the university and this ritual is quite common there. It is usually prepared in two ways first the traditional way like I explained above and the commercial way where no Igorot elders are involved but they process is merely followed due to the resulting texture and flavour of the beating and burning. It was my Igorot classmate who did let us experience it but since he was not an elder there were no rituals involved. 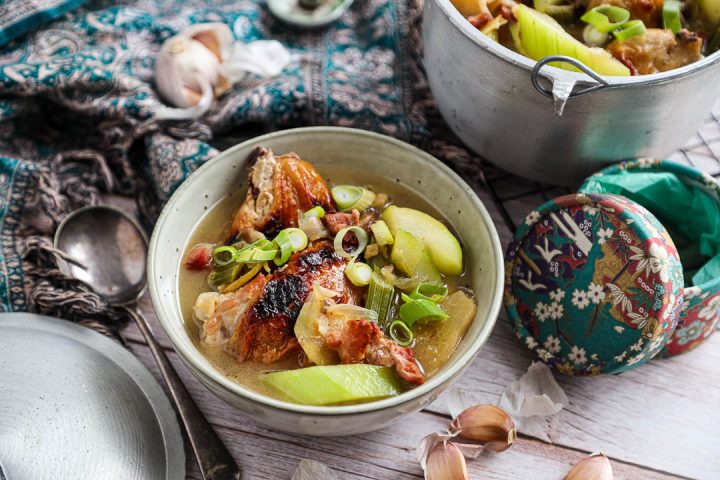 Today we will make this at home but we won’t be beating any chicken, what we will do though is to follow the other steps apart from the beating and cook it with usual ingredients it is usually cooked with. The only difficulty was to find an etag, a type of traditional Igorot thick fatty pork jerky that is salted and smoked, think of it as a sundried smoked thick cut bacon. This ingredient I replaced it with a salted and smoked meat called “speck” and it nearly tastes like etag, almost similar process less the maggots, but the light moulds gives it that funky taste similar to what you get with etag.

Pinikpikan is a Filipino dish originating from the Igorot tribes of the Cordillera region where chicken is prepared by beating a live chicken with a stick prior to cooking.