You would never imagine beef offal can be as good as this!
Walastik Pares is a version of Beef Pares created by Wilber Ramos made with a slightly thick sauce and instead of just the usual beef cuts, beef innards are used such as brains, intestines, bone marrow and tendons to name some.

Pares on its own is already a crowd favourite in the Philippines but how would you make it even better? Well meet the Walastik Pares. To be honest I haven’t tried the real Walastik Pares, I never knew this even existed until I saw the video below on YouTube from one of the channels am subscribed to, Tikim TV, a channel that documents popular street food in the Philippines that people are raving about.

Like the usual pares according to the description I found online is that this type of pares is prepared with beef offal where you have a choice of brains, eyes, skin, intestines, butt, tendons, tripe, testicles, bone marrow and leg shanks where it can be mixed and matched then served with a thick consistency sauce that is creamy. It will not be for all, I think just the mere fact of the ingredients involved, a lot will be turned off but if you don’t know what they are, I think the fear factor will be negated especially when you taste its sweet, savoury and satisfying flavours.

After watching this video, I was convinced to try to make it at home but not all of the offal parts are available commercially here in New Zealand but a few of them are. The key on making this based on my observation is that to get that creamy consistency, it has to be the same concept of how Tonkotsu broth is made by boiling bones for a long period of time to extract that collagen that makes the sauce thick and creamy. I did not achieve the same colour probably because I did not use brains which might have attributed to the creamy colour but I think I was close to it by using whatever was available to me. The result was the same fatty, thick, glistening sauce that covers the meats the I used, definitely way much better than the original pares due to its richer taste. 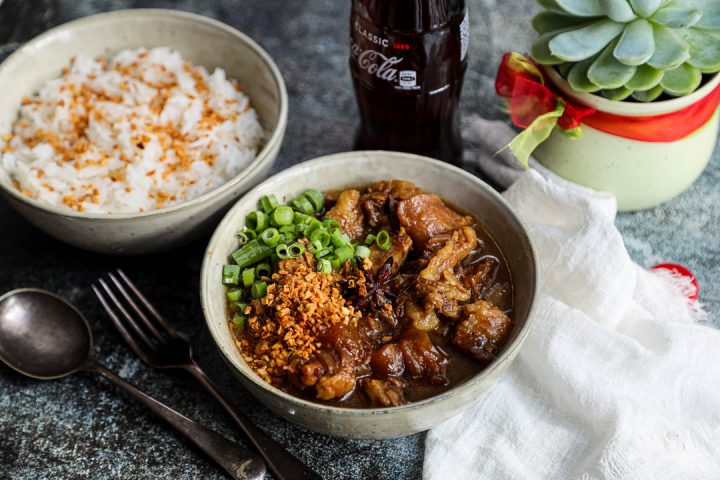 Walastik Pares is a version of Beef Pares created by Wilber Ramos made with a slightly thick sauce and instead of just the usual beef cuts, beef innards are used such as brains, intestines, bone marrow and tendons to name some.