Pinugot means to cut, sever or decapitate, it sounds horrible for a dish name but it tastes really good, read on to find out why it is named like such. Pinugot is Filipino dish originated from Bombongan, Morong, Rizal made with small shrimps, tropical vegetables, root crops and noodles in a sour broth flavoured with kamias (Averrhoa bilimbi) or tamarind

Here we are again, we unearthed a really nice dish that deserves attention as is it not as popular as most of the Filipino dishes. A dish from Morong, Rizal that is nearly similar to sinigang but served with tons of vegetables and noodles. So, what’s in the name? Well, Pinugot means to cut the head off, and this dish was named like such becuase of how the small fresh water shrimps are processed on this dish. Basically, to extract as much as flavour as possible, the shrimps head are cut off, roughly blended with water and the juices are extracted and serves as the base broth of the dish. Another flavouring agent used is a sour fruit called kamias (Averrhoa bilimbi), dried or fresh, they are added into the soup to give it a nice sour tang similar to siningang. Modern ways use tamarind mix for convenience specially for those in a hurry or for those who live in a place where kamias is not available, like me.

Pinugot is Filipino dish originated from Bombongan, Morong, Rizal made with small shrimps, tropical vegetables, root crops and noodles in a sour broth flavoured with kamias (Averrhoa bilimbi) or tamarind

Round small taro cook faster than the large ones.  Adjust cooking time according to the taro you are using. 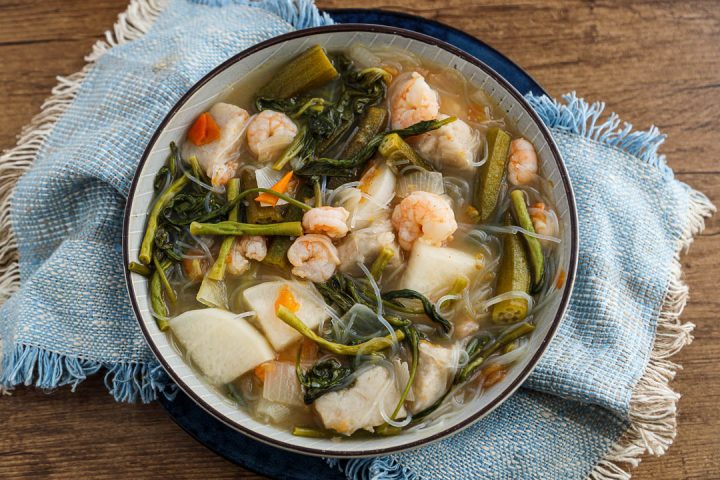