Prawns enclosed with a minced pork dumpling filling; it can’t get better than that. Camaron Rellenado is a Filipino Chinese dish of minced pork stuffed with large prawns in the middle then deep fried.

Most Filipinos have heard of the dish called Camaron Rebosado, a deep-fried battered shrimp similar to the Japanese tempura, it is a really good dish and appears usually served on special occasions but there is an even better version of that, a Camaron Rebosado in steroids, meet Camaron Rellenado. To be honest, I never came across this dish until recently, so I am not entirely sure when this dish was invented or came to life but one thing for sure, it definitely was inspired and definitely a fusion from two Filipino dishes, the Camaron Rebosado and Relleno.

Camaron, although the name comes from the Spanish word camarón (“shrimp”), the dish where it is inspired from is not of Spanish Origin, instead the dish was from Chinese Filipino roots, originally introduced by Chinese migrants to the Philippines. There is also another variety of this dish mainly found in Binondo, Manila’s Chinatown called Camaron Rebosado con Jamon where it includes a ham wrapped around the shrimp in its preparation. The variety we are sharing today, puts its up a notch by enclosing the shrimp with type of minced meat mixture similar to dumplings giving it a more fulfilling bite that can be best served as an “ulam” (viand) paired with rice rather than a side dish. Like both varieties, it is also deep fried but unlike the two where it is battered this one, it lightly breaded.

Camaron Rellenado is a Filipino Chinese dish of minced pork stuffed with large prawns in the middle then deep fried. 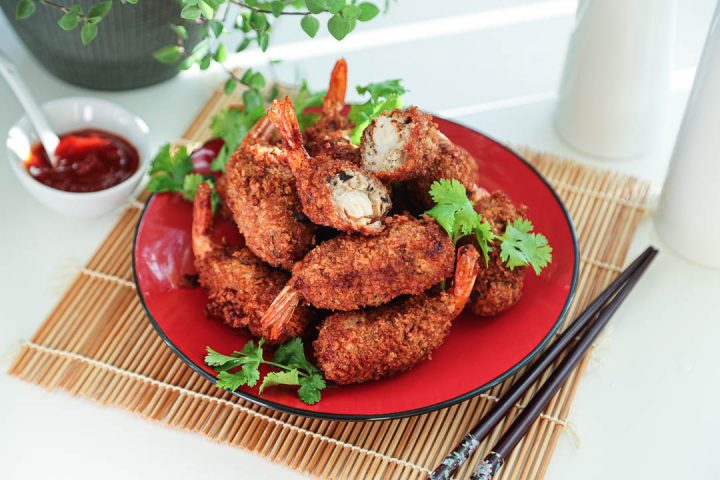