Three types of milk and cream on a cake, this dessert is definitely one creamy concoction. Tres Leches is a popular Mexican type of cake where a type of sponge cake is soaked in three kinds of milk, evaporated milk, condensed milk and regular milk topped with a sweetened whipped cream.

Soaking cake in liquid is common in European cuisine, cakes like Trifle, rum cake and tiramisu uses this type of method but there is one non-European cake that uses a similar approach, meet the Tres Leches from Mexico and Nicaragua. As the name suggest, this cake uses three (tres) types of milk (leches), evaporated milk, condensed milk and regular milk plus cream, where these liquids are used to soak a sponge or butter cake giving it a very distinct texture. This cake is a traditional Latin American cake, there are claims that it was first created in Nicaragua but others say it was from Mexico, regardless of who created it first, there are no doubts that its roots are from Europe and probably was created around the 1800’s when condensing milk was discovered. Although the Spanish and British were already in the region as early as 1500s, the condensing process and canning was just invented in the 1820’s, and these canned items were brought over by Europeans in their voyage due to its long-life span. In spite of the fact that there were no direct links to European soaked cakes, it was believed that is heavily inspired by them. During the old days cakes like these are created so there are no waste, repurposing stale cakes and breads, which is good specially during a time when food are expensive and scarce.

Moving to today, the recipe has developed and instead of using stale cakes on preparing Tres Leches nowadays it calls for freshly baked cake, although you can still use stale ones. It’s one sweet cake with a rich flavour from milk as you can imagine. While the soaking process might yield a soggy texture, surprisingly with the right amounts of liquid, this cake still holds its shape pretty well, and instead of a soggy texture, think of it as an overly moist cake. It’s one of the easiest cakes to make, if you can make a sponge cake, then you are nearly there, all you need is to mix all of those three milks together (in the right amounts of course) then pour it into that pillowy soft cake. 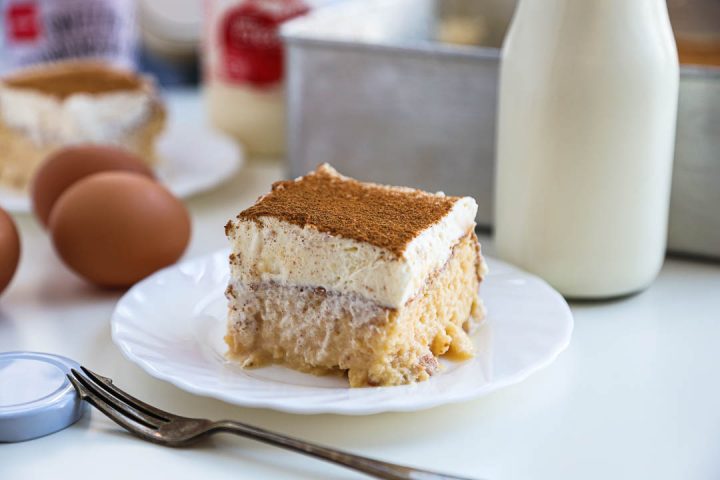 Tres Leches is a popular Mexican type of cake where a type of sponge cake is soaked in three kinds of milk, evaporated milk, condensed milk and regular milk topped with a sweetened whipped cream.