You don’t want to know the real translation of this bread; it won’t sound appetizing at all. Pan de Regla or Kalihim is a popular Filipino bakery item which is basically a bread roll filled with red pudding in the middle.

I grew up with this bread, I remember this is what my mom used to serve during merienda to our house builders / carpenters during the time they were renovating our house when I was growing up. I was tasked to buy them regularly in the bakery near our place, it was one of the standard merienda for us along with other options such as pan de coco, Spanish bread and ensaymada, and we always opted for this and not pandesal becuase they are the type of breads that does not require a palaman (“filling”) as they already come with sweet flavour.

Pan de Regla if directly translated means “menstrual bread”, and you know why it is called like such. If you can’t imagine that then think of it as a used feminine pad, now your grossed out. It is also called many other names but one of the most popular ones is kalihim, meaning secret, and it is nowhere related anywhere near that female period, instead it is named like such becuase the bakers want to make the filling a secret as they are made from previous day’s unsold bread. Yes, it is a bread filled with a bread, and you won’t even notice that, it’s just simply delicious.

I had planned on making this for quite some time now but we rarely had stale bread at home to make my pudding, up until now when we forgotten that we bought one loaf and placed it on the fridge.

Pan de Regla or Kalihim is a popular Filipino bakery item which is basically a bread roll filled with red pudding in the middle.

I used a good quality high grade flour and yeast which gave me 36 pieces, each piece after baking was roughly 4 x 2 inches in size. If you want a larger piece, you can adjust the size of each bread and divide it 24 instead of 36. 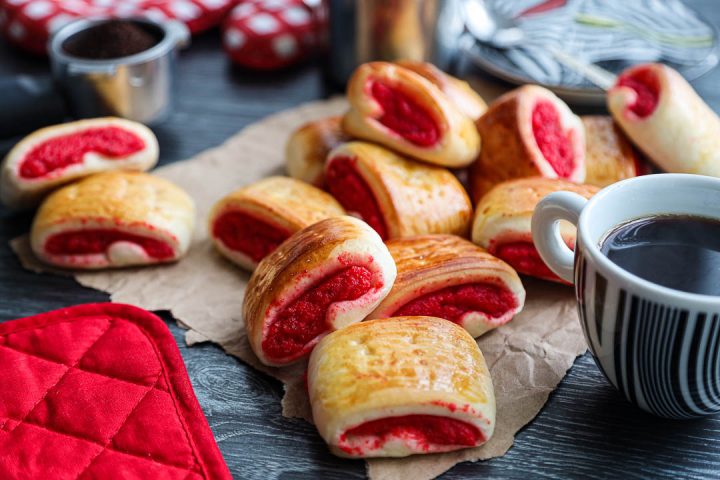