Chicken Embutido is a type of sausage made with chicken meat but rather than being wrapped in a casing, it holds in shape by its packaging. Almost similar to meatloaf where it is accompanied by a variety of ingredients such as peppers, raisins, carrots, cheese, bread crumbs and pickles. It is as good as its porky cousin but because it uses chicken breast meat, this is definitely a much healthier alternative

Embutido is one of the many dishes the Spanish introduced to the Philippines, where it is considered to be a type of sausage like the chorizo and longganisa. What sets it apart from the usual sausage is that this one is not encased by an animal’s intestine and it holds its shape by its packaging as well as the cooking process. For many it may look similar to a meatloaf, indeed it is and for me I think it’s closer to a meatloaf rather than a sausage, what are your thoughts?

Anyways regardless of the classification, to many Filipinos this is considered a festive dish where you can see this being served on occasions like birthdays, fiestas, holiday season and other special events. Traditionally they are made with pork but more recently the chicken version was created which adds an additional variety to the said dish. Now non-pork eaters and even health-conscious people can enjoy them and having tried both the taste is almost similar you can’t distinguish what is pork and what is chicken.

Ingredients like I said is nearly similar, they just differ in the choice of meat, and these ingredients contribute a lot to its flavour, the meat just absorbs it. Ingredients like capsicums/bell pepper, tomato sauce, cheese, raisins and pickles are the main elements so expect the end product flavour will be the blend of this. Once all mixed together it is shaped and covered in an aluminium foil where it is steamed to hold its shape, after that it can be served as it is or it can be further pan fried then served with tomato ketchup on the side.

Chicken Embutido is a type of sausage made with chicken meat but rather than being wrapped in a casing, it holds in shape by its packaging. Almost similar to meatloaf where it is accompanied by a variety of ingredients such as peppers, raisins, carrots, cheese, bread crumbs and pickles. 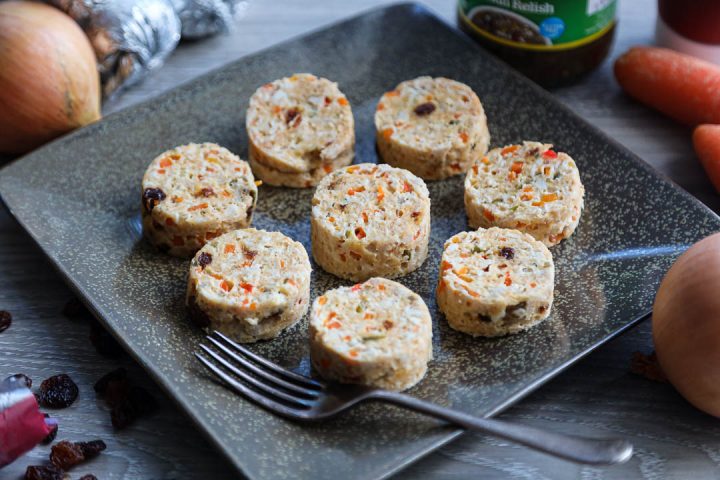