Sweet, Sour, Savoury and Spicy but not hot, this is one of the tastiest dishes you will ever try. Oxtail, Apricot and Prune Tagine is a Moroccan inspired dish of fall of the bone oxtails slowly braised with apricot, prunes and almond infused with spices such as turmeric, saffron, cinnamon, ginger, onions, garlic and pepper.

The flavour and the aroma of this dish will bring you Morocco, inspired by the many tagine dishes of the region we are making one at home using one of my favourite cuts of beef, the oxtails. Usually, tagine is made with meaty cuts of lamb, beef, chicken or seafood together with vegetables as it is served typically with bread to easily grab the tender meat as well as to soak all of those tasty juices that the tagine pot traps during the slow cooking process. Today we are using an oxtail as it will give even tons of flavours to the dish, while it not common, this cut of beef is also used widely in Morocco.

Cooking tagine requires a lot of patience, especially when tough cuts are used. The slow braising process is a painful wait as you smell the aroma that awaits to be devoured. While to cook it correctly requires that cooking vessel with the same name, you can use other cookware that creates the same effect. First the cooking vessel should be shallow so nothing is drowning in the sauce cooking every element of the dish directly on its surface. Second the steam should circulate around the cooking vessel eventually cooking each ingredient as the hot air flows inside and the tasty juices is distributed during the evaporation and condensation process. Lastly this steam should not escape the lid becuase this is where the flavours develop, little water is used as well taking note this dish originated in a place where water is scarce, but that constraint gave this dish the character it needed. Finally, it should be cooked in an earthenware pot as it gives a different dimension in flavour when cooked in a vessel like this, similar to how oak barrels give flavour to whisky and wine. 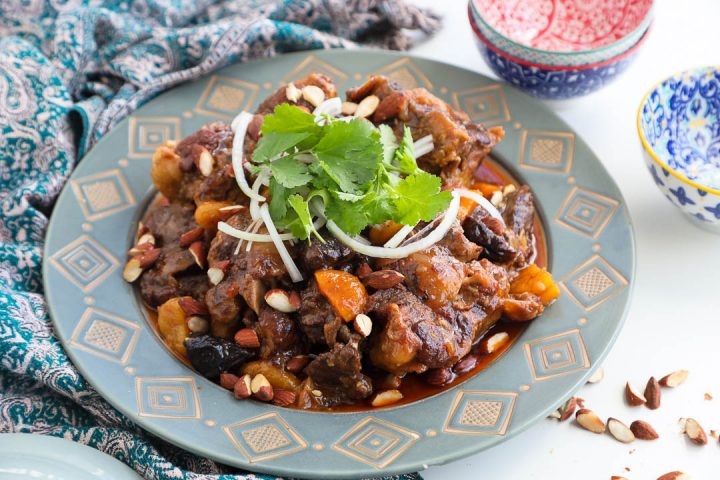 Honestly I don’t have a tagine cookware at home, I would love to but I don’t cook this quite a lot, so owning one won’t be necessary and it will just be another clutter in the kitchen, what I used though to cook this dish is using a large flat thick bottom pan so that I can lay all my ingredients in one layer then covering it with a convex lid that can seal the juices inside, the only thing is that none of those are made of clay otherwise the results was still stunning.

Oxtail, Apricot and Prune Tagine is a Moroccan inspired dish of fall of the bone oxtails slowly braised with apricot, prunes and almond infused with spices such as turmeric, saffron, cinnamon, ginger, onions, garlic and pepper.