Napoleones is a Filipino dessert/snack dish and pasalubong item prepared with a small square flaky pastry layers filled with custard filling and topped with sugar glaze.

Napoleones, it may look alike or sound like something that you had tried already, if that is the case then it is because the roots of this recipe, we had for today is no other than the French Mille-Feuille. In many countries there is something similar to Napoleones, in fact it has the same name, but called and spelt in their local language hence you have Napoleonbakelse in Sweden and Finland, Napoleonka in Poland, Napoleonas in Lithuania, Shirini-e Nâpel’oni in Iran, Napoléon in Canada and Napoleon (Наполеон in Russia to name some, all of which are a version or came from the French Mille-Feuille. Classified as a dessert where it is made with several layers of puff pastry and either custard or frangipane in between.

What I am unsure though is how this Napoleon Pastry reached the shores of Philippines and eventually localised to be what we call now Napoleones. Given the colonial history of the Philippines, it is quite logical that the Spanish brought it to the Philippines, but I have some hesitations with that, because the one from Spanish is named differently and its far from the words Napoleon as it is called “milhojas”. Most of the dishes inherited by the Philippines from Spain retained the same name as Cocido, Bacalao, Chorizo, Habichuelas, Picadillo, and Almondigas to name some. So, if the Filipinos would inherit “milhojas” then it will be named similar and not as “Napoleones”.

Having said that, the most plausible scenario is that it either came from the descendants of the 15 Frenchmen crew of Magellan when they first arrived here; the French missionaries who contributed to the spread of Christianity in the Philippines; and/or from the French traders, technicians, soldiers, and officers and crews under the Manila Galleon trade. Don’t take my word on that, all I am doing is having a calculated assumption based on the facts, it’s just sad to know that dishes with possible rich history like this was never accounted for. 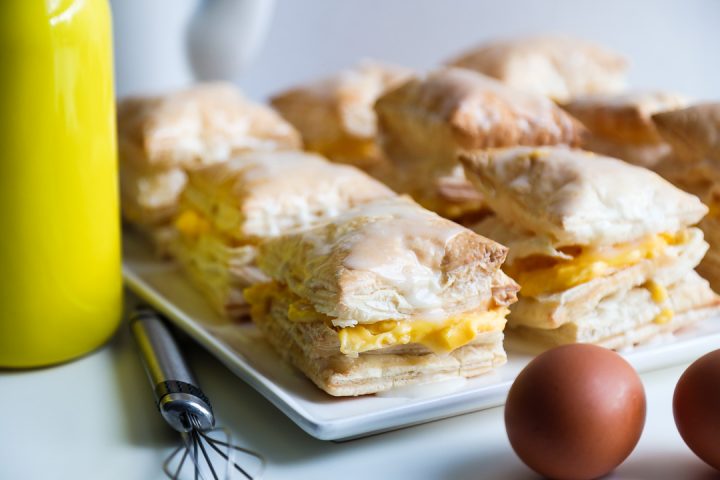 Back to our dish today, Napoleones is quite a popular specialty on Negros Island, especially in Silay City in Bacolod, it is also a popular pasalubong for those visiting the island. Bacolod is known as the sugar capital of the Philippines which makes this the right home for Napoleones, at it uses a lot of the provinces major produce. It’s a really delicious dessert, flaky pastry with slightly sweet smooth custard in between then top top it all up, a sweet sugar coating that brings it all together. What is even better, our recipe below is quite easy to make, all you need is to use the frozen puff pastry then you eliminate the need to knead and flatten the dough.

Napoleones is a Filipino dessert/snack dish and pasalubong item prepared with a small square flaky pastry layers filled with custard filling and topped with sugar glaze.