East and South East Asian desserts are quite simple, not too intricate and not too overly sweet. East and South East Asians do not have a lot of varieties when it comes to that and there is a reason behind it. In the region of East and South East Asia the majority of dishes are influenced by the Chinese. Chinese consider sweet food to be unhealthy, and they don’t have much of a tradition of dessert. Chinese find Western desserts overly sweet and heavy so traditionally Chinese restaurants is unlikely to offer dessert on their menu. If there, is it will be light desserts like almond jelly, egg tarts, sweet potato ginger soup, jelly with milk and sesame seed balls to name some. Having said that, this is just the majority but with globalisation, many forms of food are introduced by different cultures to other cultures and the new generation started to learn, enjoy and perhaps modify and adapt to these sweeter desserts.

Philippines is quite different, it’s a mix of Chinese and American. This means if we have something like almond jelly or sweet potato ginger soup, it will be almost similar in simplicity but the taste will be much sweeter and heavier. Take those two desserts I mentioned for example, for the almond jelly our counterpart would be the buko salad where it has a similar concept of combining fruits and jellies but instead of a light syrup, cream and condensed milk it used. Same with the sweet potato ginger soup, we have the ginataang halo halo as an equivalent, where root crops are served with sweet liquid but in the Philippines, we use coconut cream and lots of sugar.

Today our dessert, Mango Bango is quite a new creation, I am sure about that because I haven’t seen this when I grew up. All I know before was the Buko Salad and Fruit Salad, then several years later the Buko Pandan showed up, and most recently this one. All have the same concept, as they all combine fruits and jellies which is then served with a concoction of a simple mix of whipped cream and condensed milk. 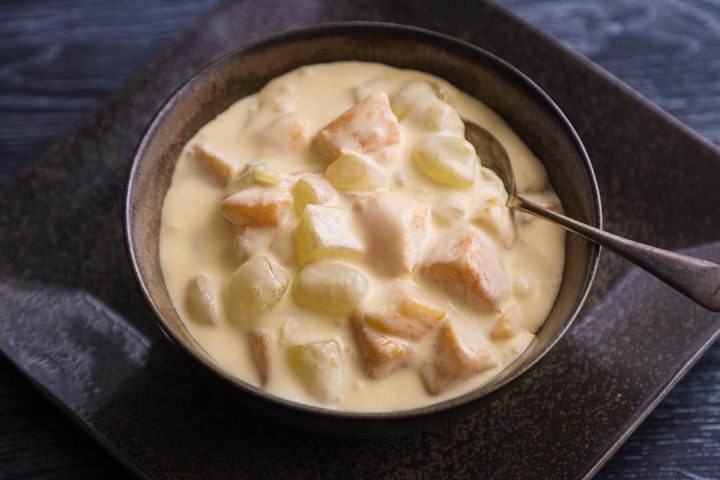