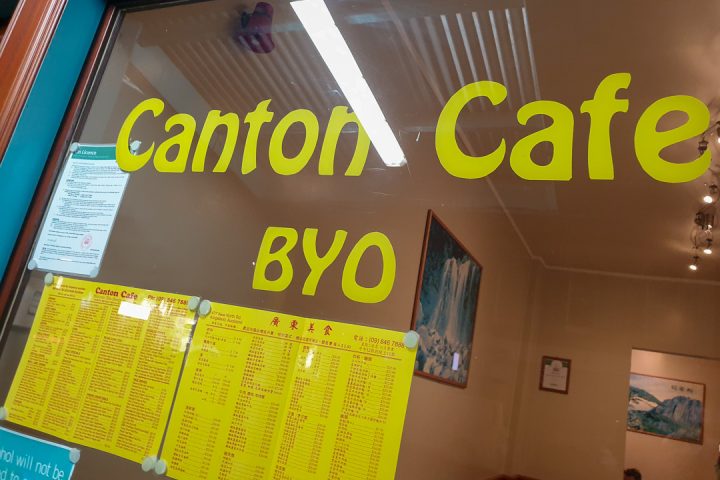 The last time I was here was roughly 10 years ago or to be precise 3759 days ago, that first time was in March of 2011, just nearly a year when I got hired by my current company. It was one of my first dine out experiences with our team so it’s quite memorable to me. Moving on to today, we are back at the same place, but this will be my last time dining out with my team as I will be moving on for a new job. That last 10 years was the best of my career life, where I built a lot of stuff, learned a lot of stuff, taught a lot of stuff, built strong relationships, created friendships, travelled a lot while enjoying a lot, I will certainly miss my team but I have to move on. It was a very hard decision as I already felt comfortable with where I am where it became a real breeze in terms of running a Technology department, my people are amazing as well as my peers and my boss who are ever supportive even with my move. I don’t know if it will be for greener pastures and it’s up to me to find out and basically build the same environment again, I just wish for the best.

Back to our place today, Canton Cafe. This restaurant in Kingsland is loved by many Kiwi’s for many years hence up until now the place is still popular and vibrant, people still flock the place so in busy hours expect to wait to be seated, we booked in advanced just to make sure we have a table for us. If this happened before that F4rk!n6 COVID then there will be at least 30 of us but because we are in a Travel Industry there were only 12 who remained, it’s a sad reality but it’s one of those things we don’t have control of. It was probably the same people count the first time I joined this company, so we can easily snuggly fit in a round table. 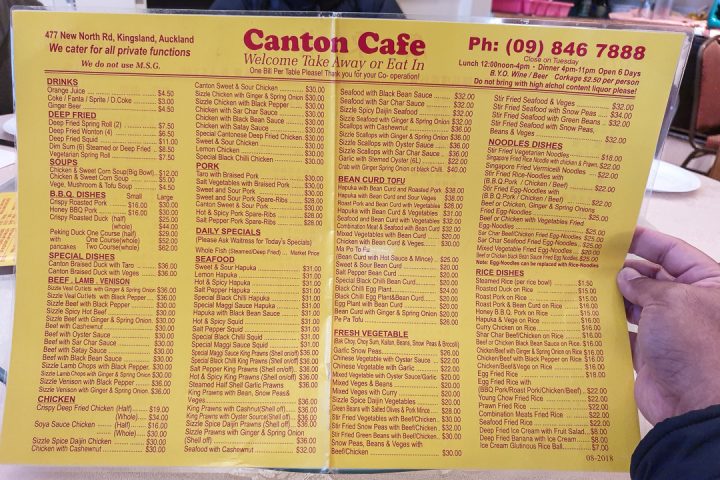 We were seated on an upstairs room, which I never knew existed because during the first time we just sat near the entrance. They always trusted me on doing the orders (because I am a food blogger), I never had let them down in this regard since I joined and hopefully this last one will yield good results too. I tried to cover all protein sources as well as added a vegetable on the side, so I grabbed dish of each squid, prawns, pork, tofu, duck, and beef with additional items like rice, noodles, and vegetable. Order was quite quick, in a few minutes our orders started to arrive, and that Lazy Susan stated to fill up really quick.

First to arrive was the Peking Duck with Pancakes (one course whole / NZ$52.00.) It came in a one big serving plate lined up with seafood crackers beneath to absorb that oil from the duck. It was good, pancakes were soft, meat was succulent, and skin was so crispy. The only thing though is that the sliced duck is not consistent in thickness, plus some had meat, the others did not come with it, just the skin. 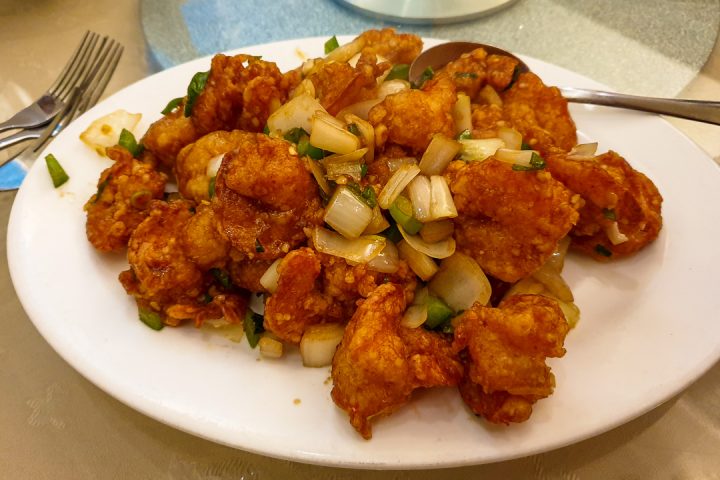 Next to arrive was the Hot and Spicy King Prawns (NZ$36.00), this was my favourite order that night. Large sized prawns where each piece was a mouthful, they were perfectly cooked, juicy on the inside and crispy on the outside, it was sweet, savoury, and spicy, very nice to nibble on. 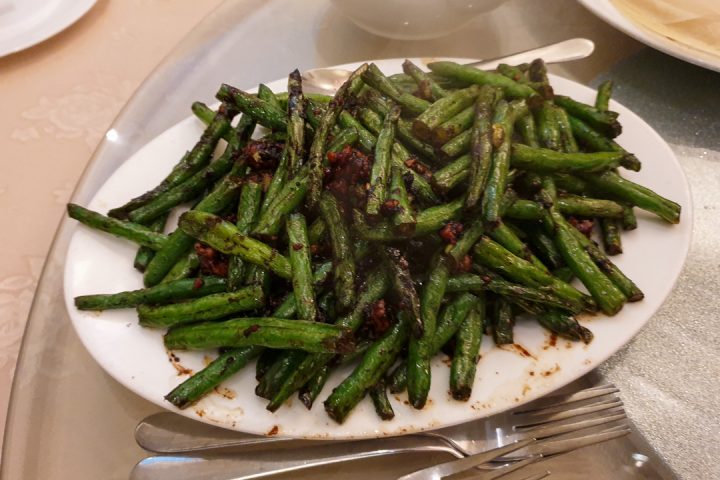 Then we have the Green Beans with Salted Olives & Pork Mince (NZ$28.00). Again this was good, but I felt something is missing in terms of flavour which I will be explaining down below. Vegetables was crisp and vibrant.

Sweet and Sour Pork (NZ$30.00) which was requested by one of my colleagues. Perfectly fried pork pieces, with moist insides and crispy outer layer, lathered with sweet and sour sauce. Nicely balanced acidity and sweetness.

Then the Salt Pepper Squid (NZ$31.00), this one I did not like it that much, it was tougher than usual and did not have enough flavour, which makes me think the squid used was the frozen ones and not the fresh ones. Again like the green beans, I felt there is something missing with regards to the taste.

I also then grabbed some Salt and Pepper Tofu(NZ$20.00) because it reminded me how good it was when we had it at Cafe BBQ Duck in High Street. When it arrived, I already knew it won’t be the same, it looks not crispy at all and the cut was larger, I was right. It also lacked the flavour and taste that I am looking for.

Finally we had this Beef, Ginger and Spring Onions Fried Egg Noodles (NZ$25.00), while was perfectly cooked, noodles was firm, beef was very tender, again it was tasteless.

Now if you notice several items I mentioned did not have the flavour I am expecting, items like the Green Beans, Salt Pepper Squid, Salt Pepper Tofu and the Beef Noodles, first of all they don’t use MSG, I am good with that but one thing that is not present on these dishes was the Wok Hei. It is an important part of the Cantonese cooking; it is that complex charred aroma that coats the piping-hot dishes served in Cantonese restaurants. In the Sweet and sour and Hot and Spicy King Prawns they are not evident since these dishes have strong flavours either from the meat or sauce but for those simple stir fries, they are essential as that is the soul of Cantonese cooking.

So, did I fail on ordering for my team? Well not that quite, of that 12 there are only 4 of Asian descent and they are the ones who could possibly notice them, the rest just enjoyed it based on the empty plates and the reaction on their faces as they devour these goodies. For me what was served as just average apart from the Duck and Prawns. MSG or Wok Hei, either one should be there to make it more interesting, I know for many MSG has that bad rep but its 2021, that American propaganda was long time debunked and what we have left now is a bad stigma because of this. There are no good or bad, right, or wrong, but it’s worth understanding the origins of those choices. In the case of MSG, they appear to have been less about science and more about the culture and politics during the old times, it’s still all up to you what your choice is for me I am OK either way, but in the case of Canton Cafe if they cannot deliver the wok hei then add MSG or give it more flavour so Asians like me who seeks for that flavour that is needed to be there.