Binatog, also known as bualaw, is a Filipino snack or breakfast dish prepared with dried mature waxy corn kernels soaked in saltwater until it puffs up then it is topped with freshly grated coconut, butter, and salt or sugar.

The last time I had this dish was when I was 10 years old, since then it was long forgotten by my system until probably last two years when I started to crave for it. I have been wanting to make this for a long time, but I don’t have the right ingredients to do so hence I let that crave settle for a while.

Binatog is made out of dried mature waxy corn kernels soaked in saltwater until it puffs or by boiling in water with “Apog” or Calcium Carbonate then rinsing it in several cycles. It is a very popular food in the Philippines where it is peddled by street vendors on bikes with two large tubs of this dish at the back. Like most street vendors there is a unique sound or call that the vendors make when they sell their goods, like shouting “Balut” for Balut vendors, “Taho” for taho vendors, Airhorn for puto/kutsinta vendors, Ice Cream bell for Dirty Ice Cream vendors and for this one is that chime sound made by striking a metal bolt in a used drum brake hanging in the bikes handle bar. Once you hear that sound, it is the time for you to get a deep bowl and go outside and wait to be served.

Making this at home is quite tedious especially when you start with those hard corn kernels, luckily the Mexican use a similar ingredient called Hominy and these are available in cans. I first saw this in an American specialty shop here in New Zealand, I also saw it in some of the supermarkets here but recently they stopped showing, maybe because they are not a popular ingredient here and that is the time I also started craving for it. Week in, week out, every time I visit any supermarket this is the only thing, I wanted to search for, but that search yielded no results, until I searched online. Why haven’t I thought of that? maybe because grocery items for me by default is in a supermarket and not in an online store. But in case you live in New Zealand I grabbed it in Mexi Foods the same place I grabbed my cheese sauce when I made some Nachos recently.

Now the cravings has been satisfied, when my Hominy arrived this was the first thing I made, a dish that I had last tasted more than 30 years ago.

Binatog, also known as bualaw, is a Filipino snack or breakfast dish prepared with dried mature waxy corn kernels soaked in saltwater until it puffs up then it is topped with freshly grated coconut, butter, and salt or sugar. 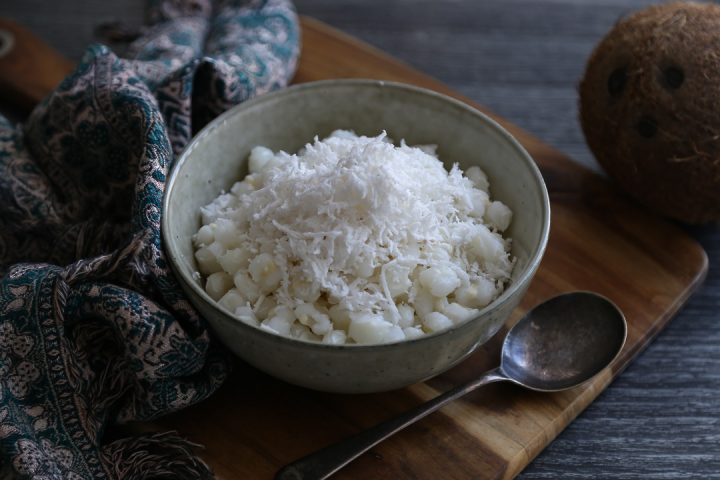