Chao Long is a Filipino style Pho inspired by the Vietnamese prepared with rice noodles on a richer and sweeter beef broth served with chunks of beef, calamansi and herbs.

If you are looking for that Vietnamese porridge recipe, I am sorry to disappoint you since this recipe is for the Filipino noodle dish called by the same name. I was confused too when I first heard of this dish, but history suggest these two are closely related and this noodle dish is definitely created by the Vietnamese who became locals to the region. So how did this dish originated?

In 1975 when the Vietnam War ended, thousands of Vietnamese people took refuge outside of their country, most of them ended up in the neighbouring islands of the Philippines. In 1979 a refugee camp was established in Puerto Princesa, Palawan where most of these Vietnamese people ended up. With their numbers they also brought their treasured recipes with them, one of them was a rice porridge served with congealed blood cubes and other offal pork cuts like liver and intestines called Chao Long Without means of living, these Vietnamese nationals opened eateries where they cook dishes like this porridge to serve the local community, Filipino’s named these place “Chalongan”, which means a place to eat “Chao Long”. Time passed by new menu items were introduced and one of them was this Vietnamese Pho, but instead on using the traditional ingredients, they modified it to suit the Filipino taste by the use of its local produce. This localised noodle dish became so popular, the porridge was then forgotten but the term “Chaolongan” remained. Since then this Pho was the main ticket item on the menu and the name “Chaolongan” started to become associated with the dish, which ended up by calling it Chao Long.

This version of Pho or what is locally called Chao Long looks quite different from the original, first instead of raw beef slices this version of Pho is made with chunky beef cubes that is braised until tender, local herbs are also used which changes its flavour profile, and to even emphasize that flavour and colour you will notice that the broth is reddish in colour due to the banana ketchup used giving it a slight sweet taste. Noodles used is quite different as well since this dish uses a slightly thicker rice noodle and sometimes, they are rounded as opposed to flat. Finally instead of lime a local citrus fruit is used called calamansi. Since then slight variation of this dish had emerged for the reason that during World War II there was a shortage of Tomato Ketchup so locals developed some alternatives to it using far more readily-available crop, some even used annatto seed to give it that same colour but added a bit of sugar to have a similar taste.

If you love Pho then this dish is a no brainer, while it differs slightly on the taste it has the same comfort factor of the beloved noodle dish. Its warming, its savoury, slightly sweet and its meaty too.

Chao Long is a Filipino style Pho inspired by the Vietnamese prepared with rice noodles on a richer and sweeter beef broth served with chunks of beef, calamansi and herbs. 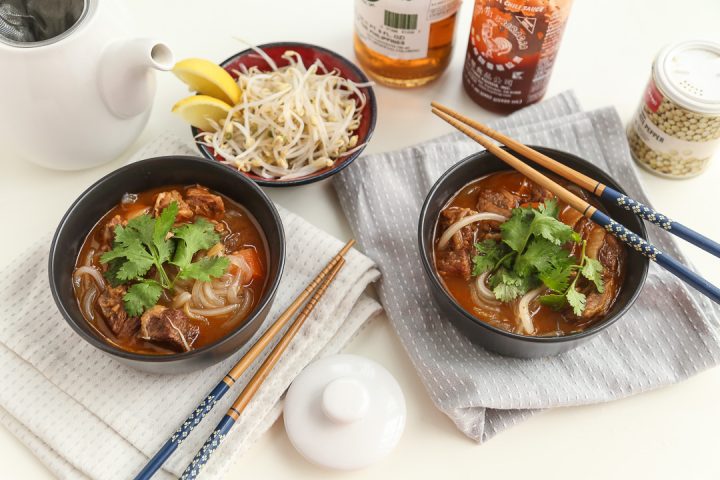