The first time I encountered grass jelly was when I lived in Malaysia, I remember I tried it because I was intrigued on the grass part? I only knew that jelly can only come from animal bones and seaweed but never in a grass. The grass used on this jelly is called Mesona, where its leave and stems are dried and oxidised similar to the tea making process. After which it is then boiled with potassium carbonate for several hours with a little starch before it is cooled down to transform into a jelly. The texture of this jelly is quite different, if the bone-based jelly is quite sticky and wobbly, and the seaweed based is brittle this one is somewhere in between, like a Nata de Coco. Now why bother making jelly out of this plant when you can get it easily from other sources? Well it has some health benefits where it is reported to have anti-diabetic, anti-cancer, and anti-diarrhoea properties due to its high antioxidant nature, it also has a cooling property hence it is popularly consumed during summer in Asian countries.

The first time I tried this was in a drink called Cincau, I got totally addicted to this drink, I so loved it, I prefer this over the usual Coca Cola. The taste is quite near to my palate as they feel like your drinking Sago Gulaman back in the Philippines with the difference in jelly texture. I also discovered a similar drink called Michael Jackson where instead this jelly cubes are serve in a palm sugar infused water, it is served on sweetened soya milk (now you see why it is called Michael Jackson), I do order this once in a while too. Then moving here to New Zealand introduced me to Korean and Chinese desserts where this jelly is heavy used.

Today we are making a dessert made with this grass jelly and it was heavily influenced by the many Asian dessert we already had tried. In this dessert we are mixing grass jelly with fruits that we love where it is chilled then served with condensed milk and shaved ice. I know it is winter here at the moment but there is no stopping us to have an easy delicious dessert like this. 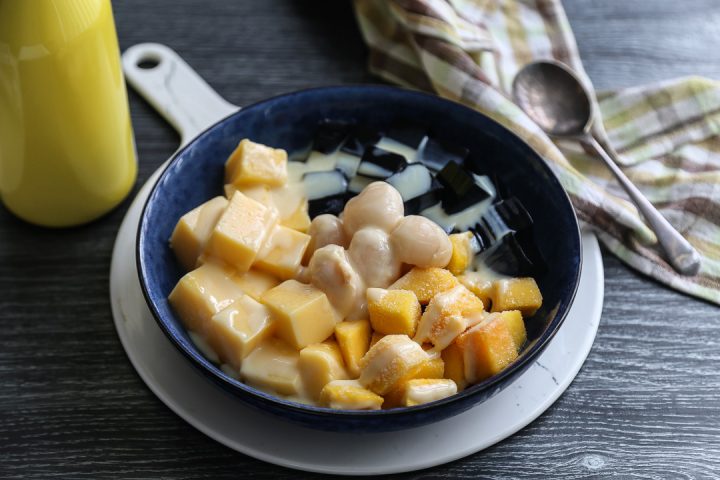