Kalamay Hati is a Filipino rice cake prepared with glutinous rice flour, coconut milk and sugar cooked in a large pan while continuously mixing until it becomes thick and dense until it holds it shape. Once cooked it is topped with latik, a coconut milk curd.

When I see Kalamay served on parties and household tables it always reminds me of a town in the Philippines called Antipolo, a place where this rice cake alongside cashew nuts are commonly sold specially in the surrounding area of the Antipolo Cathedral. We came here once in a while during the old days and there are two reasons why we go here for a mass, first is when we visit my aunt who lives in Cogeo and town near Antipolo, or when we have a new car. You might ask why new car? Antipolo Cathedral’s patron saint is the Our Lady of Peace and Good Voyage and Filipino’s has this tradition of sending their new car for a blessing (similar to baptism) before it is driven on long journeys, and what’s the best place to have it blessed, definitely in a church where the patron saint is for successful voyages. The image which is in the cathedral depicts a Black Madonna and it was brought to the Philippines during the times of the Spanish regime by Governor-General Juan Niño de Tabora from Mexico via the galleon El Almirante in 1626. The safe voyage of the Governor=General across the Pacific Ocean was attributed to the image hence it was given the title of “Our Lady of Peace and Good Voyage”. It was further substantiated later by six other successful voyages of the Manila-Acapulco Galleons with the image aboard.

Now back to our dish. As mentioned, this rice cake is quite popular in that place, every food stall sells them and of course every time we go there, we buy them too. A simple rice cake that is just made with three simple ingredients common in the Philippines, glutinous rice flour, coconut milk and sugar where it is laboriously cooked in a large pan by continuously mixing it as it thickens and becomes dense. It is quite a task to make this, it starts easy but as it cooks it becomes a workout. I don’t mind making them because the end result is something that I really love, and in small batches it is easier to handle. Like many Asians where texture is quite important on our food, this one does not lack it, in fact it has lots of it, imagine a denser mochi, soft and chewy that tastes like coconut cream and is sweet, add to that the nutty coconut curds on top, it’s a slice of Asian heaven.

Kalamay Hati is a Filipino rice cake prepared with glutinous rice flour, coconut milk and sugar cooked in a large pan while continuously mixing until it becomes thick and dense until it holds it shape. Once cooked it is topped with latik, a coconut milk curd. 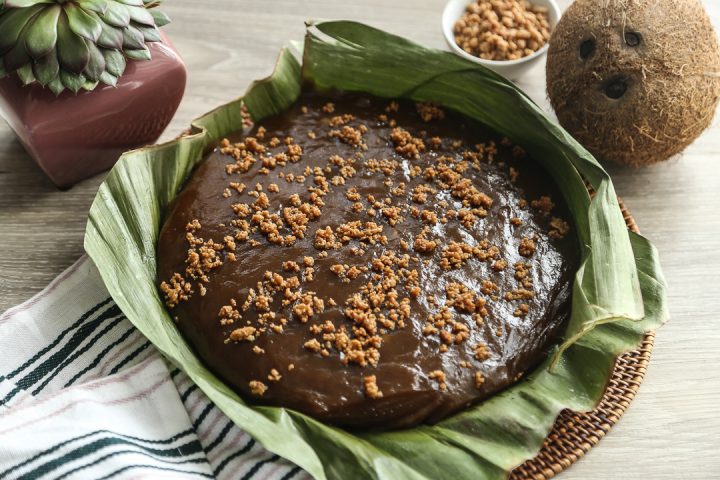