Menchi Kastu is a Japanese yoshoku dish made with minced meat thick patties that is breaded then deep fried. These patties can be made with either beef, chicken, pork, or any mixture of each.

When we visited Japan several years ago, that was the first time I seen and tried this dish where we had it on supermarket bento boxes and on restaurants. For many, like me before I was introduced to this, menchi katsu will be unheard of, it’s not as popular as other Japanese dishes outside of Japan like tempura, ramen and sushi but in Japan this is quite common, that is why I had a chance on trying them even without someone introducing me to it. Like I mentioned earlier they are easily available on supermarkets, a lot of restaurant offer them, and they are even sold on butcher shops and delis where they are freshly made.

Menchi Katsu in Japanese means minced cutlet, “Menchi” for minced and “Katsu” for cutlet. It is a type yoshoku food (western style Japanese food) made with minced meat (chicken, beef, and/or pork) breaded in panko breadcrumbs then deep fried until golden. Menchi Katsu have been existing for more than 100 years now, where it originated in a Western Style Japanese restaurant in Asakusa, Taito Ward, Tokyo during the Meiji era. It then started its way throughout Japan staring in the Kansai region where it was said to have begun at Genuine Kobe Beef Mitsuwaya Butcher Shop during the early Showa period where it initially used ‘menchi boru’ (meatballs).

Today it’s in New Zealand because I am making it at home :), I am pretty sure I am not the first one who brought this here, but I haven’t seen them on any Japanese restaurants that I tried here yet. One thing for sure, it’s the first time it was cooked at our home and the results were amazing.

Menchi Kastu is a Japanese yoshoku dish made with minced meat thick patties that is breaded then deep fried. These patties can be made with either beef, chicken, pork, or any mixture of each. 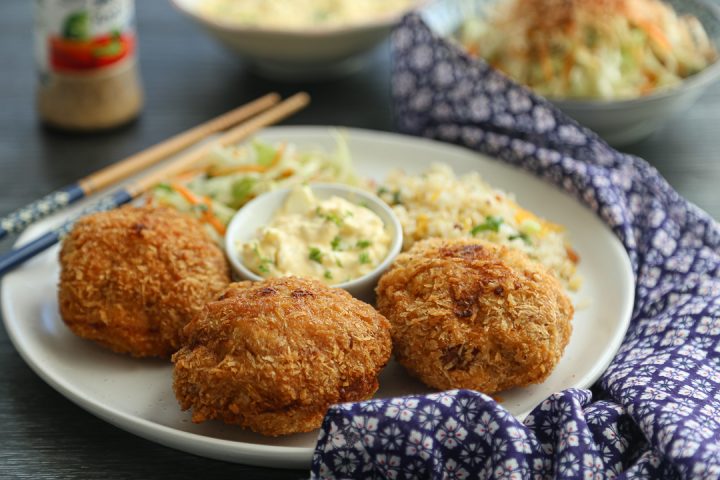