Vegetable Pakora is a type of an Indian snack made with chickpea flour, spices, and a variety of chopped vegetables like onion, green beans, carrots, cauliflower, and cabbages to name some. It is then deep fried till crisp and golden brown.

Another leftover day for me as I saw these small bits and pieces of vegetables on my fridge bin. I have quarter of a cabbage, a quarter of a cauliflower, some carrots, a bit of green beans, onions, and some spring onions. Initially I was thinking of making some chopseuy or stir fried vegetables but most of the ingredients are not enough to make a full meal out of it, luckily I remembered I had one delicious pakora last time I dined in on an Indian restaurant which became the inspiration of our recipe today.

So what is Pakora? Basically it is a spiced fritter made with vegetables such as potatoes and onions which is then coated and seasoned with gram flour batter then deep fried. It is a popular street food in South Asia primarily in India. Pakora in most sources indicate that it originated in Gujarat, in Western India where it was common to enjoy deep fried food mostly in spring during those periods. It was said that where this dish was created, they decided to batter their vegetables to add variety to their deep-fried staples as well as to celebrate the spring season. The most common varieties of pakora uses onions, eggplants, potatoes, paneer, cauliflower, or chili pepper, mostly on its own of a mix of two. There are also versions of pakora that used meat or fish but for our recipe today we will be using a variety of vegetables, not just one or two but whatever I can utilise on my vegetable bin.

Vegetable Pakora is a type of an Indian snack made with chickpea flour, spices, and a variety of chopped vegetables like onion, green beans, carrots, cauliflower, and cabbages to name some. It is then deep fried till crisp and golden brown. 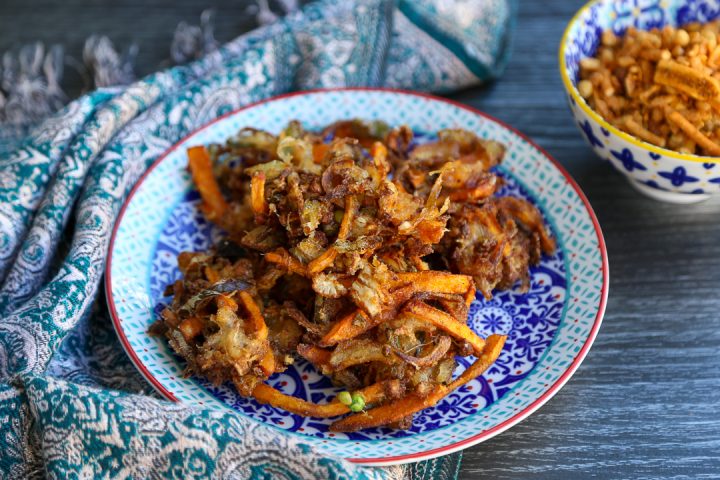