Yup there’s a new drink in town that has the same craze like bubble tea, meet Hey I am Yogost! Well I may be late in this one but like they said better late than never. Hey I am Yogost may look like it’s a bubble tea but it is not, since its main product is not made with milk tea and does not contain boba, instead it is a frozen yoghurt drink with whole grain antioxidant purple rice and natural fruit pieces. They claim that this drink gives a healthier option as the ingredients used are rich in vitamins, minerals, and antioxidants. It is said that a cup of Yogost boosts immune system, promotes gut health, and supports weight loss, basically a superfood in a cup.


My daughter had tried this numerous times before and she told me I might not like it so I never did try them until one day, me and my wife was walking along the streets of Auckland CBD’s Queen St and saw this massive line usually made up by Asian students at this Hey I am Yogost branch. At first it did not occur to me that this was what my daughter was referring to, until the name sounded familiar, regardless, I did give it a try.

We ordered two different items, one from the Rich Yoghurt series which was the Taro Yoghurt (NZ$8.50) and another from the Fresh Fruit Yoghurt series which was the Rice Mango Romance (NZ$11.20). There was quite a wait time since this place is packed most of the times and all you can do is stand and wait since their shop was just a stall, there were no seats around. You will be given a number and will be called once your order has been processed and ready. 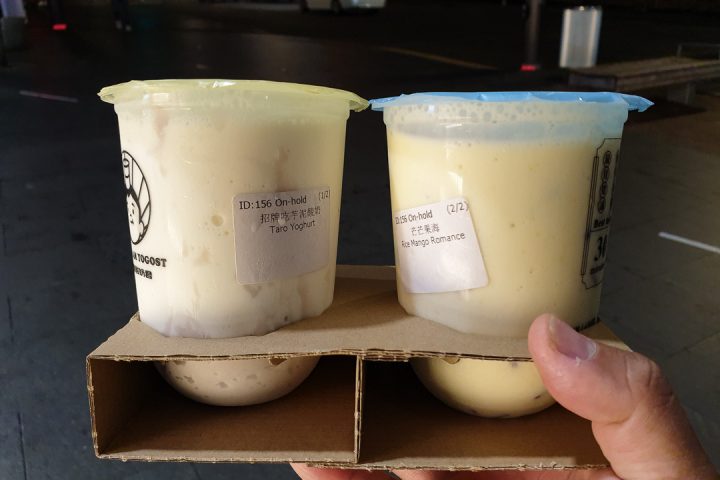 Minutes later we have our drink and first thing you will notice is that it is cold and quite heavy even for its small size compared to other bubble tea shops. On first sip, it was quite a shock to our system, we are not ready for that type of flavour, texture, and density but as we continuously sip them it starts to become better and better, in fact I started to like it. The flavour reminds me of Yakult in frozen form with added ingredients of the flavour you had chosen.

It’s quite heavy compared to Bubble Tea, it was rich and its quite dense. For me it does not qualify as a drink due to that fact what it is good for is a meal replacement because after one cup of this you will definitely be full. As for the taste, I was surprised that I liked them, the Taro Yoghurt has this rich taro paste that feels like a mashed potato, it indeed used real taro. The Rice Mango Romance was also good, there’s bits of mangoes and rich mango flavour that blends well with the yoghurt. Both drinks have a purple rice on it, they were popped, meaning cooked until it was enlarged until they pop, they texture was chewy and was a nice addition to the texture of the dish. Overall, it was really good, while it was heavy, I felt it was refreshing specially the mango flavour and the temperature it was served at, I just wished it was a bit cheaper.