Rabo de Toro or Spanish Oxtail Stew is a Spanish dish that is traditionally made after the bullfights, made with bull’s tail where it is slowly simmered in tomatoes and red wine with spices and aromatics until fork tender.

During the old days there were no television or radio hence in some countries they either resort to stage plays or even animal fights as their form of entertainment. In the Philippines we still have these in the form of cock fights and these events are usually huge, in fact I can remember when I was young they were bigger and they are performed in an arena where boxing and basketball matches are held. We probably got this from Spain but instead of using roosters, in Spain they have bull fights but instead of two bulls fighting for their lives, this sport is between man and bull. In both instances there will be casualties and those casualties usually become dinner (not the human casualty of course) for the lost party.

In the Philippines when the rooster dies, it becomes a stew, usually in a form of tinola, but since it’s a sporting animal they will be tough due to the muscle it builds during its training regime. This goes true as well with Bull fighting, when the bull dies, it turns into this wonderful stew called Rabo de Toro.

Rabo de Toro, Rabo de Toro Estofado or simply Spanish Bull Tail Stew is quite popular in Spain, it’s one of the country’s most typical stews. This Andalusian creation dates back to the Roman times and as mentioned typically prepared after a bull fight, today this dish is still common specially in Madrid where bullfights are still popular today. Having said that it can just be restricted to killed bulls otherwise there will a shortage of bull’s tail as an ingredient, this means modern dishes now utilize oxtails.

Rabo de Toro is a really good dish, it’s one of those dishes that is easily can be qualified as a comfort dish, prepared with bull or oxtail, where it is slowly simmered in tomatoes and red wine together with spices and aromatics for a long time making it fork tender melt in your mouth kind of dish. It can be enjoyed with mashed potatoes, French fries, crusty bread, or rice.

Rabo de Toro or Spanish Oxtail Stew is a Spanish dish that is traditionally made after the bullfights, made with bull’s tail where it is slowly simmered in tomatoes and red wine with spices and aromatics until fork tender. 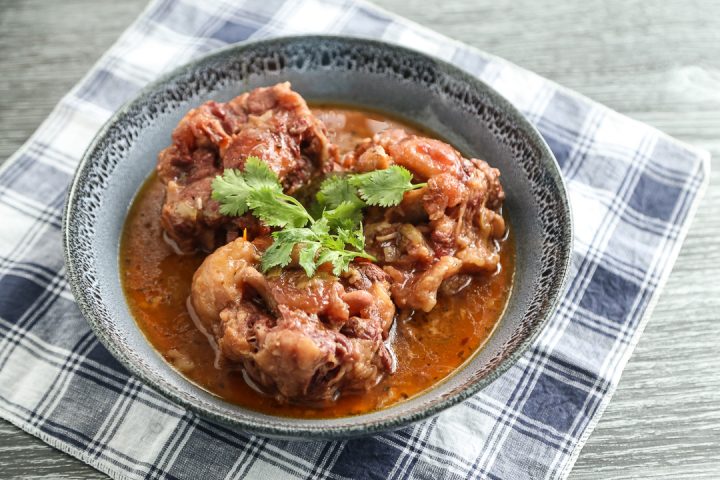