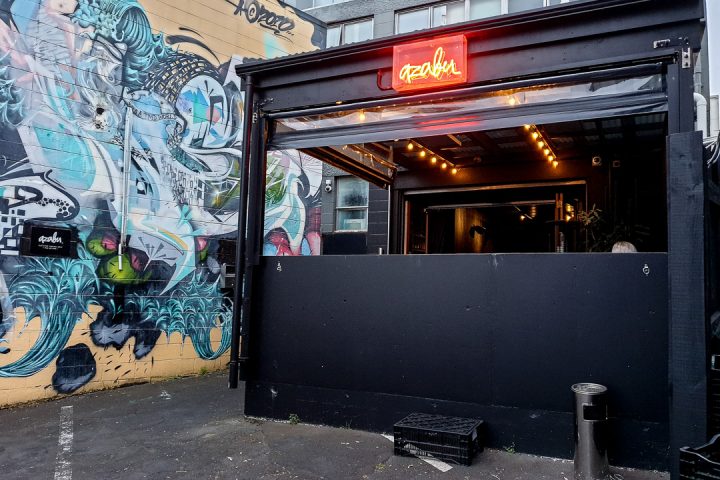 This was quite a late post to be precise it was two months late since we had this dinner during Valentine’s day. Anyways the information here is still quite relevant since their Valentines menu basically is a variety of their Omakase Menu. This dinner was NZ$95.00 and its all worth it, they may call it a set menu of three courses but there are dishes and dessert in this selection basically like a tasting menu but even better since these are full servings not just tasters. It was definitely a feast on your senses, they are all presented really well, the aroma was seductive, and everything tastes really fresh and delicious.


I have been wanting to dine in here for quite some time now and this was the perfect time for it first because it was Valentine’s day and I am in the hunt for the best tasting menus in Auckland which this one will be a part of. Located near the end of Ponsonby Road by the side of K’Road, it was tucked in a quiet corner of this busy street, parking might be a challenge for the first timers and if that was you don’t try and look for that space in Ponsonby road since they have a hidden parking and entrance at Maidstone street. You may have to book in advance since this place attracts quite a lot of customers, I know that for a fact since I tried to book this place a couple of occasions and the date and time I wanted was already full, hence during this instance, I already booked it during the first weeks of January to be sure.

Azabu in case you don’t know is a Japanese restaurant and the minute you step in on that entrance you will we welcomed with a dimly lighted warm ambiance of the place, it’s not like your typical Japanese place where you are greeted with a typical Japanese greeting and in your face Japanese fixtures but instead it was quite mellow in a nice way, making it look like a place where you can quietly enjoy dinner with y our special someone.

As mentioned we came here of Valentine’s Day, and like most good restaurants here in Auckland there is only one menu for that dinner, there are other ala carte options but why bother, all you need to do it sit down relax and enjoy the night with great food. The Valentines is similarly priced like their Omakase Menu and on arrival you will be given a drink that you can choose from either Asahi Super Dry On Tap, Roku Gin Spritz or Azabu Yuzu Sangria Flask To Share (Serves 2), there were three of us so we chose the flask and the Asahi Super Dry for me. Now you might be wondering why I had two people for a date? Well that was my daughter and my wife and it has been a tradition of ours to invite her during Valentine’s day while we can, it may be har last since she has grown into a young lady now and probably will have her own date in the next coming years but for now we try to enjoy it as much as we can.

The Asahi Super Dry was a no brainer, it’s one of my favourite beers, its light, refreshing, crisp and easy to drink. Azabu Yuzu Sangria Flask on the other hand was nothing like the usual sangria, it was sweeter and stronger, more like a cocktail but I loved it, definitely they did not skimp on alcohol on this one. 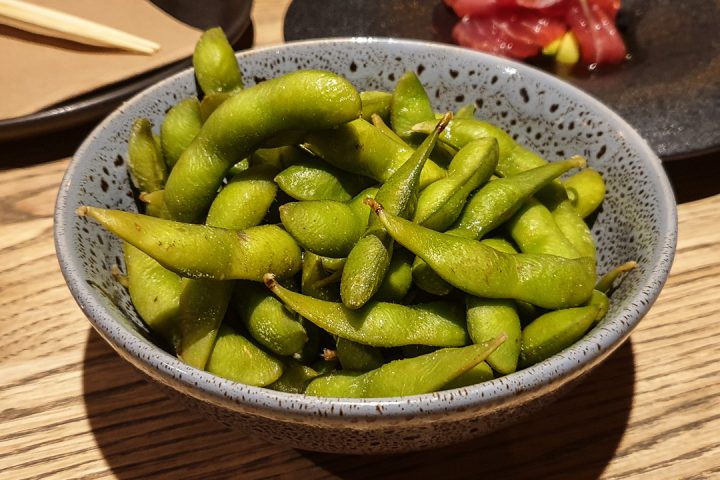 With the drinks Edamame Beans with smoked lime salt was served on the side. The lime salt gave it a different flavour profile.

Then the Amuse Bouche came next in the form of Tuna ceviche with apple, cucumber, red onion, and cumin. Served in a small portion similar to the ones you get on tasting platter. When this was served, I thought this was their normal serving size until the next dishes arrived.

First Course was served, first was this pretty Rainbow Sushi Roll with Amarillo, chia seeds & tobiko. Freshness was not a question; they were well made sushi’s served only with either salmon or tuna. Definitely much better than the normal sushi here in Auckland which is already of high standard compared to the many around the world. 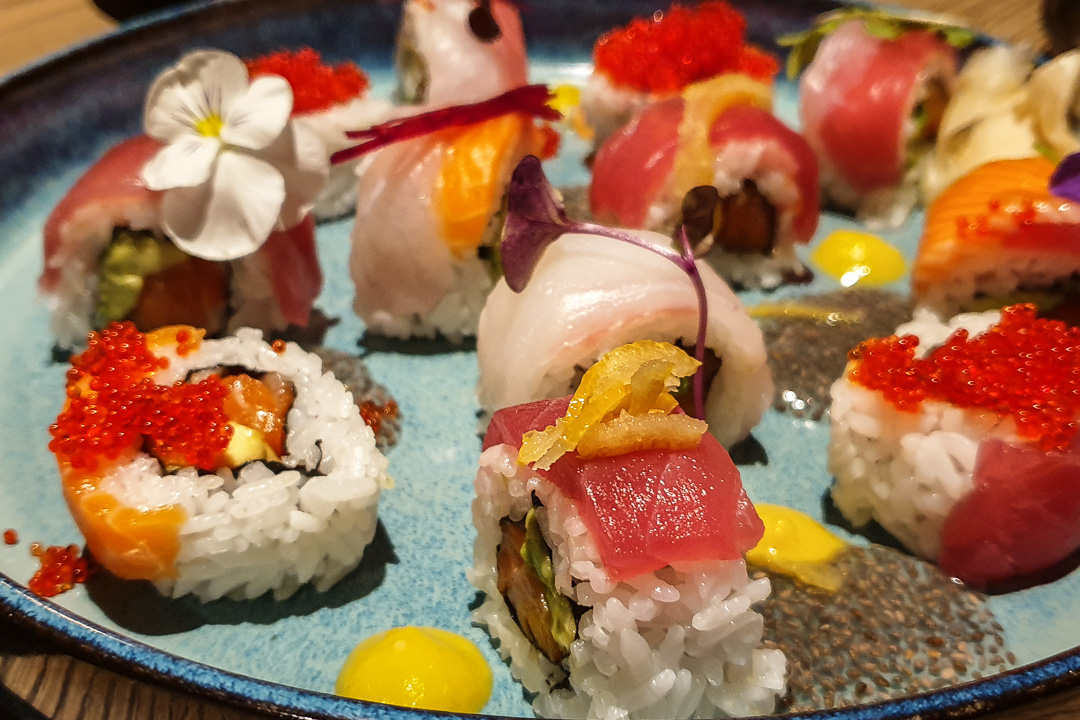 Then we had this Beef Tostada with truffle sesame dressing, shiitake mushroom & pickled daikon, it may not look Japanese but if you notice closely, those beef are basically tataki served on a crispy flat corn crisp. It was mildly cheesy, and the truffle taste was quite pronounced which was really great.

Then the Second course arrived, first was the Free-Range Chicken Karaage buttermilk, pickled daikon, kale crisp and aji Amarillo mayo. It’s basically a fried chicken but done in a really nice way, not to heavy, not too greasy, and quite crispy on the outside and juicy on the insides. 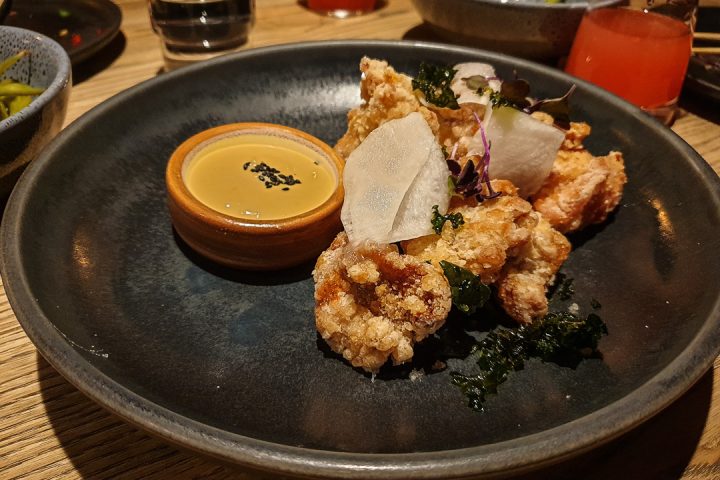 The next second course was the Black Tiger Prawn dumplings with aji verde, purple kumara chips & almond powder. This too was a great plate, its mouthful of flavours, the sauce perfectly paired with that hidden juicy plump tiger prawns inside that thin layer of dumpling sheet. Then that concludes the second course, at this stage we were quite full, but the food kept on arriving, so we have to slow down so they won’t serve the next ones. 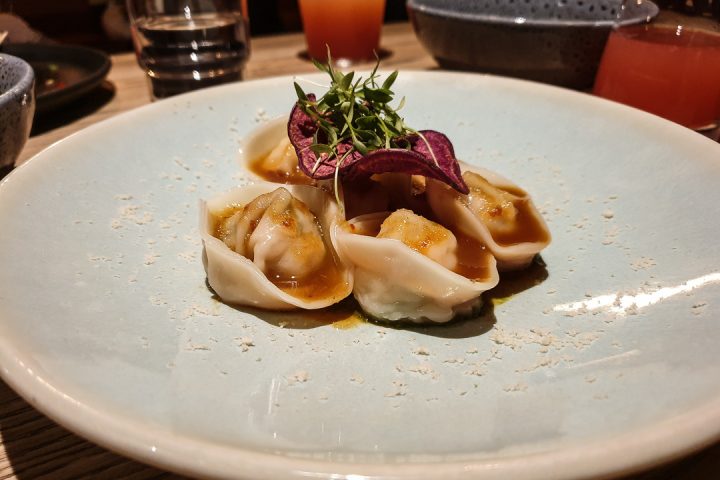 The third course, also the main course was a choice between a lam, beef, pork, and fish dish. We grabbed three apart from the steak. First was the pork dish, a dish of Crispy Pork Belly with spicy miso glaze, salsa & cauliflower purée, again as expected it was well prepared, the skin was very crispy but it melts in your mouth, the meat is so tender and it falls apart. The salad too was good, it was made with bean sprouts which I usually hate on a salad, but this one, it tasted really clean and fresh, the dressing accompanied it very well. 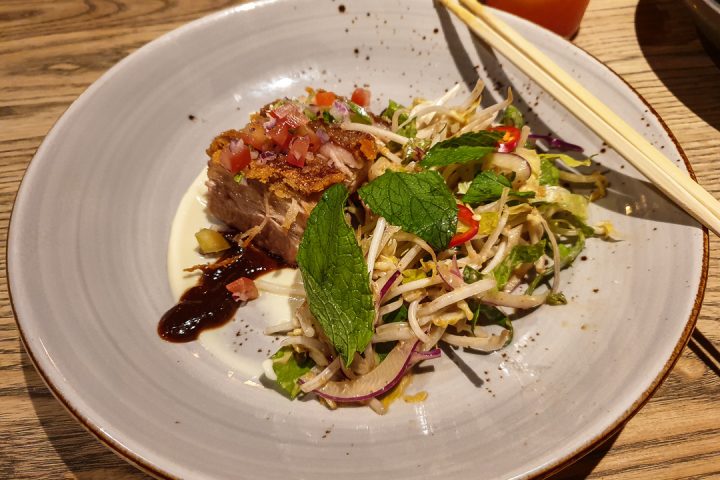 The next main dish was the Pan-Fried market fish with shiitake mushroom, aji verde & yuzu ponzu butter, it was my wife’s choice. The fish tasted like snapper, I might be wrong but it was perfectly cooked, still juicy but seared really well on the outside, I am not sure though where the shiitake is on this dish but I don’t mind the one served was good enough.

Then the final main course was the Lamb Chuleta with smoky aubergine & coriander purée, this was my daughter’s choice and again this was another phenomenal dish. At first, I was sceptical with the coriander purée as it can be quite strong, but it was not, it was the perfect sauce for that very tender lamb.

All of which are served with Japanese Short Grain Rice and Seasonal Vegetables, we did not bother eating this as like I said there was quite a lot of food in this set menu. 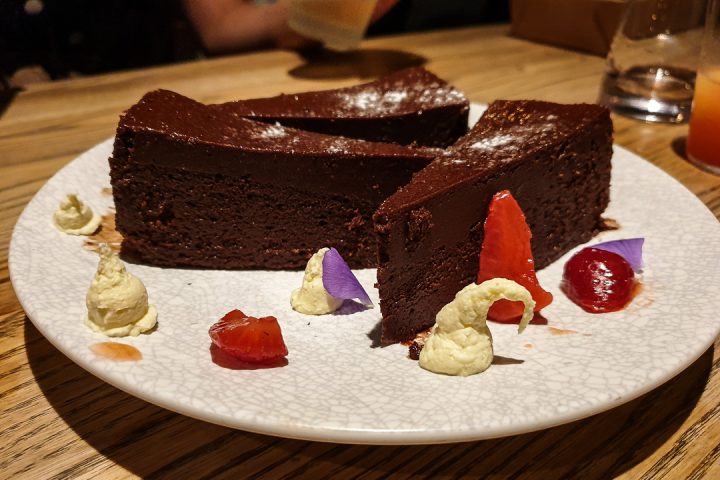 Now for the finale, the dessert, chocolate cake w/ ichigo sake strawberries and citrus mascarpone. Now for this one I am not sure about the plating, maybe because the chefs were trained two only put to on a plate since it was Valentine’s and they expect only pairs for this order but since there were three of us the third piece looks like it was just chucked on a free space on the plate. Nevertheless, it was once decadent dessert, very rich, it was more mousse like rather than chocolate cake. The ichigo sake strawberries was sweet and citrus mascarpone sour and creamy which cut perfectly with the bittersweet chocolate. 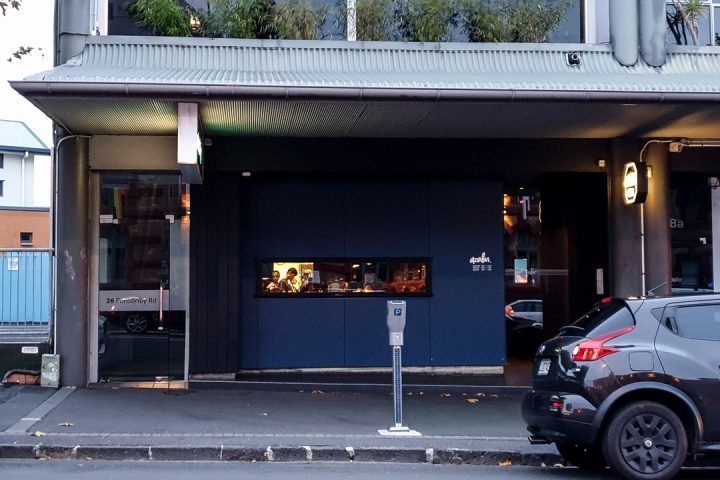 There you go, I guess the pictures already justified what we had, it was one great experience, amazing food, stunning service in a perfect location. Definitely this place is highly recommended.