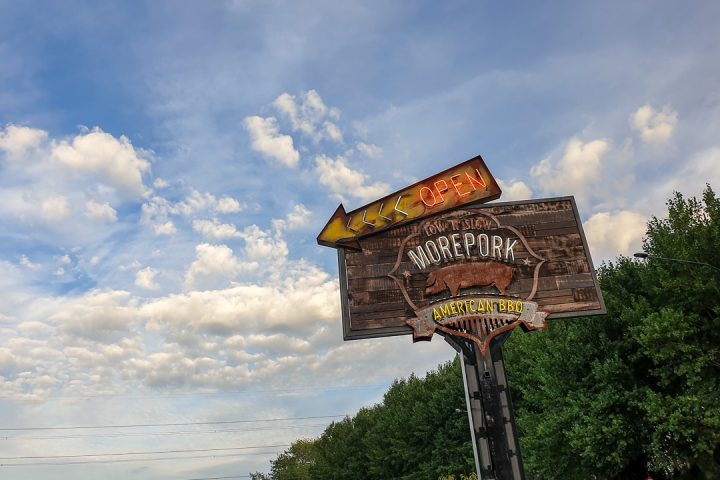 After moving here in North West Auckland one of the places we miss are North Shores many restaurants. We were quite spoiled with the choices we had when we were still living there. There are at least three to four options for cuisines like Korean, Japanese, Chinese, Malaysian, Indonesian, Vietnamese, Italian and Kiwi to name some but here in Westgate there is only one for each, lucky if there are two, probably because it’s quite a new developing suburb and not a lot of Asians yet who invest in the restaurant business. What that entails is that if you get tired of the Korean restaurant here, hard luck there are no other options. Luckily North Shore is just 20 minutes away from where we are but still that’s a long way if you consider dining out on a regular basis, once in a while it’s OK. Another option for us is to go further North heading to Kumeu, Riverhead, Helensville and Huapai where its nearest restaurants are just 10 minutes away from us, but that 10 minutes is a long drive since it’s on a highway on the country side where a lot of Auckland wineries are based. What is good though is the ambiance of these places since its located on or near the wineries, so the landscape is a sight to behold.

We are just starting to try some of the places here and the first one on our list was this Morepork BBQ Restaurant and I discovered this when I had a craving for some American Barbecue Brisket, I searched online and this is what I got. Morepork BBQ Restaurant is located just as you enter the town of Kumeu just a few meters where the speed limit decreases to 50 km/h, it’s quite a big place with ample parking space so you won’t miss it. Set just in the outskirts of the town, it has that American West feel, wooden trusses, weather board building, wooden flooring, a long deck, and backyard which really sets you up in the mood for some barbecue.

As we sat, I already know what to order since I checked their menu online, I had my mind set on their Sample Platter (NZ$75.00) so I can try out some of the barbecues they offer. Each platter is good for two people, so we grabbed a couple since there were three of us, each order consists of four meats and two sides. Options for meats were Brisket, Pulled Pork, Housemade Sausage, Pork Belly and Chicken Legs. Pork Ribs can be chosen but there is an additional NZ$13.00 on top of NZ$75.00. For the sides the options are Baked Beans, Smoked Ham Hock and Collard Greens, Mac n Cheese, Coleslaw, Potato Salad, French Fries and Corn Bread. For both platter we grabbed the Brisket, Pork Belly, Sausage and Pulled Pork, then for the sides it was Mac and Cheese and Corn Bread.

Service was quick, in a few minutes our drinks came in then followed by the platters. I liked how it was served, on tin pans rustic style. The serving portion may not look a lot in the picture but there were ample meats in there to serve two people or one really hungry person, now let’s dissect each element on that plate. 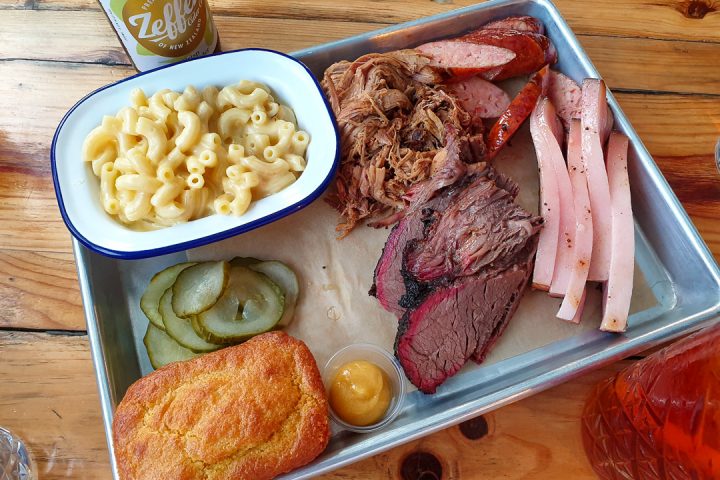 Staring with where I craved, the brisket. This one was my favourite, it was fork tender, very smoky and moist. If there is one reason to go here, then this will be it. My next favourite was this sausage, another great pick, it was meaty, fatty, not dry and tons of flavour, I just wished they serve twice the portion of these as I can’t get enough of it, probably one of the best sausages I tried to date. Then you have this pork belly which the texture resembles a leg ham, the fat was soft but not melt in your mouth soft, more like a jelly texture. This pork belly was also smoky in flavour, very savoury and simple flavours. The final one for the meat was this pulled pork, this one in my personal opinion was not that great, it was dry and was expecting more flavours from it, I was expecting a slight barbecue sweetness but this tasted just like it was only salted, it was my least favourite of this bunch, definitely will not order this part next time. 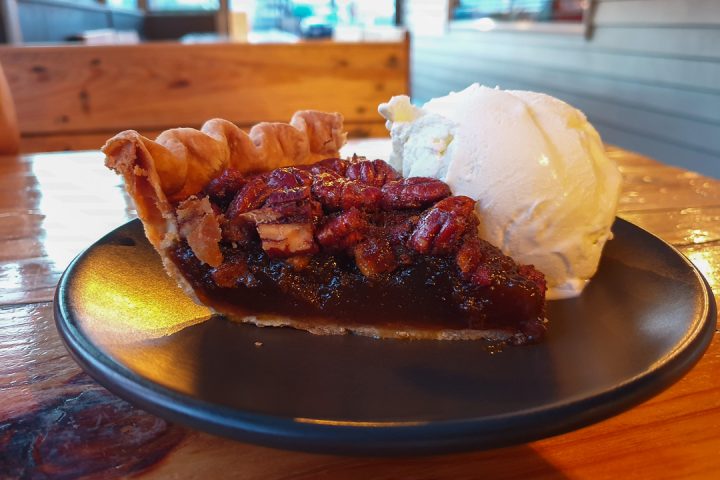 As for the sides, the mac and cheese was great, it was cheesy, the macaroni was still firm but soft and not mushy. Then you have the corn bread which is alright. Our drinks matched well with our dinner, specially the beer, which is similar to Asahi, crisp and easy to drink, very refreshing.

After our dinner as I was ready to pay, I saw this dessert pie stand and grabbed a slice of Pecan Bourbon Pie, I can’t resist how it looks so I succumbed. I was ready to order them as it is, but the waitress told me they are much better with vanilla ice cream, I followed that suggestion and I am glad I did. On its own it was way too sweet for me but with ice cream, it’s one of the best desserts you will put in your mouth. After that bite, I thought that brisket was the best thing that happened to me during that day, I was wrong, it was this Pecan Bourbon Pie matched with vanilla ice cream.