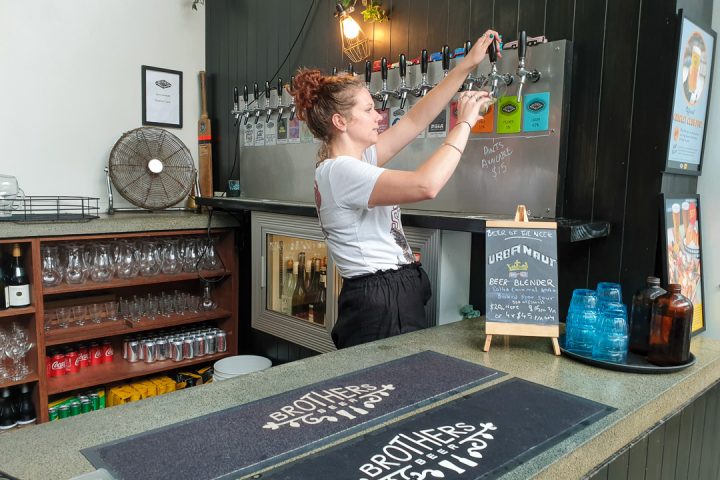 We came here only for one thing, their beers! Brothers beer in City Work Depot have an amazing collection of beers hence this was the choice for today to unwind after a long day’s work. I had never been to a bar for ages, thanks to COVID, I got stuck at home with canned beers and online virtual beer tastings, I thought socializing in bars would be a thing of the past but not anymore specially here in New Zealand. While our country had lifted the lockdown long time ago, people are quite hesitant to go to places that are crowded, even at the time we were here, to see huge lots of people is quite a rare instance.


It was quiet, we almost had the place to ourselves, luckily it was not closed, and business continues. Located at the City Works Depot, this place quite easy to find, with ample spaces for parking, it’s quite a convenient location to have a good pint. Their selection was great 18 types of beer in tap (at least) and a very wide selection of bottled and canned beers. There were a lot of craft beers, there was even this two on one beer with different flavours like Salted Caramel IPA, Baked Pear IPA, Coconut Hazy IPA, Queen Pineapple Sour, Rhubarb Saison and Apple Crumble Sour to name some but I was after the ones on tap.

As a classic pilsner lover, I first grabbed some Brothers Beer Pilsner, a crisp classic brewed with a medley of New Zealand hops, easy to drink and very crisp, it was a thirst quencher. I had three glasses of this, it was so nice to drink. I did also tried a few on the taps, just as a taster and what strike me most was this Mango Hazy IPA, not sure what was the brand but this too was good so I ordered a glass of this, it a nice mango flavour but it with hints of sweetness.

I would definitely want to go back here and try a lot of different varieties, but I have to drive home so I stopped with four glasses. Definitely a place to be in if you’re a beer lover, they do offer some food but since it was near dinner time, we just enjoyed the beers where they specialize at.