Sisig Matua the predecessor of the sisig we know now, simply made with boiled pigs face, chopped into bits, tossed with chillies, onion and ginger then seasoned with sukang sasa.

Before Aling Lucings famous sisig there was this, Sisig Matua, the predecessor of the sisig we know now. While the modern sisig is taking the limelight, we must not forget where it all began, with this dish hence we are showcasing this recipe today.

Sisig Matua as mention is the original type of sisig, it may not look like a sisig because neither of the ingredients were grilled or broiled, hence people associate it more with Kilawin. Sisig Matua is as simple as it gets, like Kilawin or ceviche, meat, in this case pork ears and snout are boiled until it becomes very tender, it is then chopped into small bits and pieces then tossed with chillies, onion and ginger, after which it is heavily doused in a type of vinegar called sukang sasa. It does not have eggs, pig’s liver, seasoning sauce, and butter/margarine which the modern sisig all have.

During the early days this dish was served to women who are pregnant until they lactate, the sour and salty taste fixes their pregnancy cravings and once they gave birth, it was believed that the cartilage from the pigs ears would increase their calcium intake which is good for breast feeding. Today we rarely see this type of sisig, but in Pampanga there are still some carinderias that sell this dish. In our recipe today we will be adjusting the cooking method a bit but we will still maintain the ingredients, instead of boiling the meat, I opted to steam them so we still get the rich flavours of the pork without diluting them into the boiling water.

Sisig Matua the predecessor of the sisig we know now, simply made with boiled pigs face, chopped into bits, tossed with chillies, onion and ginger then seasoned with sukang sasa. 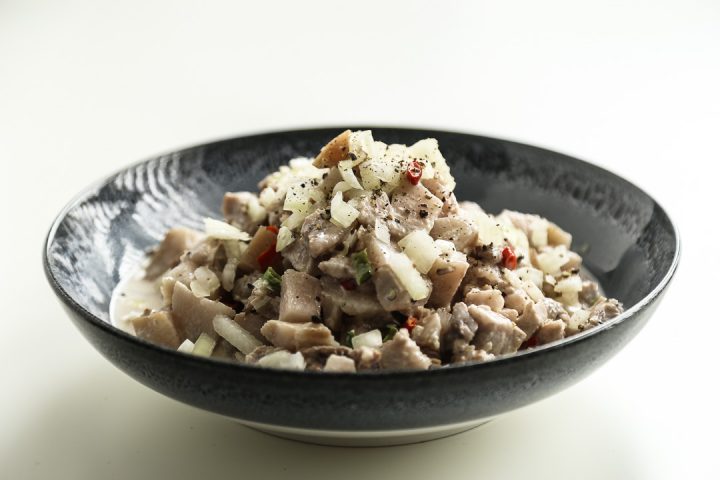