Begucan Babi is a variety of the Filipino dish Bingaoongan prepared similarly with pork and rinsed raw bagoong but served with more tomatoes, making it less salty and a bit tangy.

We all know that most of the popular and tasty Filipino dishes are from Pampanga, they are the culinary capital of the Philippines after all. Dishes like sisig, morcon, menudo, caldereta, estofado, embutido, asado, tocino, lechon, chicharon and afritada all came from this province and without a doubt many of these dishes are a Filipino favourite and has been a mainstay in Filipino household across the years. It just proves one thing; Kapampangan cuisine is awesome! Having said that, there are many dishes in their sleeves that is equally as amazing, some originated from the said province and some are a variety of other dishes from other parts of the Philippine islands like our dish for today, the Begucan Babi

Begucan Babi is the provinces take on the Binagoongang Baboy, almost similar but with some minor differences that make it stand out. First, the traditional recipe calls for pork lard, while it’s not as healthy as sunflower or canola oil, it adds tons of flavour. This recipe also calls for more tomatoes, that cuts through the saltiness of the bagoong. While this binagoongan uses more of the fermented stuff, its less intense even though it uses the raw bagoong, since it is rinsed first before being used, making it less salty and fishy, retaining just the good stuff. Some families use annatto powder just to give it a vibrant red colour and a bit of a floral taste. Finally it also uses more sugar, giving it a sweet edge over the others. These small differences sets this dish apart from other binagoongan, and if you haven’t tried it this way yet, I suggest you to give it a try and find out for yourselves.

Begucan Babi is a variety of the Filipino dish Bingaoongan prepared similarly with pork and rinsed raw bagoong but served with more tomatoes, making it less salty and a bit tangy.

There are two types of bagoong alamang, one is sautéed which appears in dark red colour and another one whihc is raw and it apprears in pink colour.  Use the raw/pink one on this recipe. 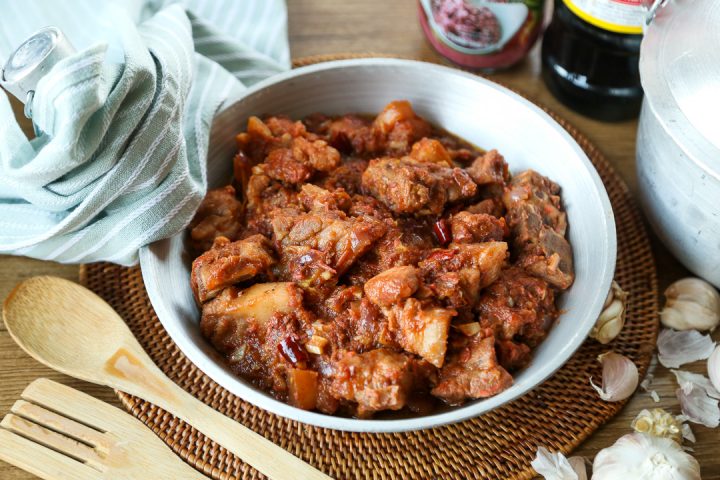