Chorizo de Cebu is a type of Filipino sausage from Cebu easily identified by its round small shapes, like the popular longganisa it is sweet, but this Cebuano specialty has a bit of spice on it.

Philippines may not be known for its sausages but our cuisine has several varieties to offer, the basic longganisa being the popular one, then you have the skinless variety, the Vigan longganisa, Bacolod, Calumpit, Tuguegarao, Alaminos, Lucban and our post today, Chorizo de Cebu, but it does not end there, in fact each major province would have one or two varieties and its too many to mention.

For most, it’s hard to distinguish which is which specially when cooked, they almost look similar, just a small change on colour so you will only know once you had tasted it. But there are two from that list that can easily be distinguished, first, the Alaminos variety due to the small pieces of coconut leaf midribs that divide them and the Chorizo de Cebu which appears as round size compared to the usual elongated sausage shape.

Chorizo de Cebu also has a big difference in flavour, while its primarily sweet, there is an extra spice kick due to the hot paprika and chillies plus a floral taste from the anise liqueur. Chorizo de Cebu is consumed quite differently compared to the other longganisas since most of them are used as “ulam” (viand) with rice, this Cebuano sausage is usually paired with “Puso” is a rice wrapped and boiled in a triangular casing made of woven coconut leaves.

It will be hard to find this outside of the Philippines since most Asian Groceries only sell the first three that I mentioned above, luckily I have my trusty sausage maker so I can make any sausages I want, specially this one which I haven’t had for a long time.

Chorizo de Cebu is a type of Filipino sausage from Cebu easily identified by its round small shapes, like the popular longganisa it is sweet, but this Cebuano specialty has a bit of spice on it.

To make anise liqueur just combine 50 g of star anise with 2 cups gin or plain vodka, 2 cups white sugar and 2 cups water, let it ferment for a couple of days before using.  If you are not that fussy, then you can also use 1/2 tsp of ground star anise for this recipe. 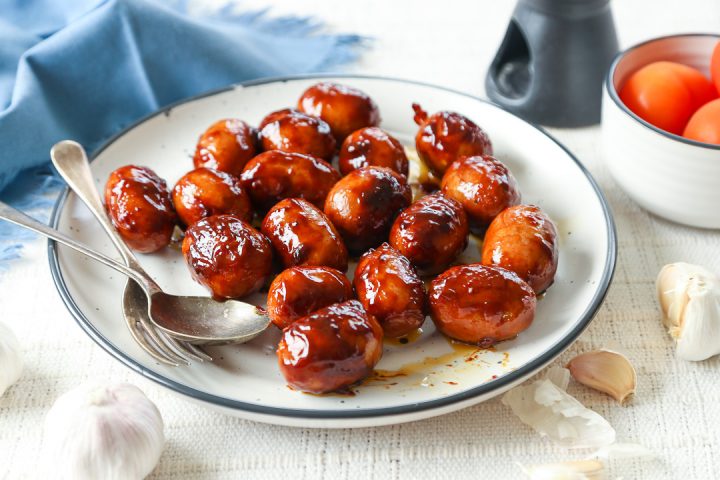